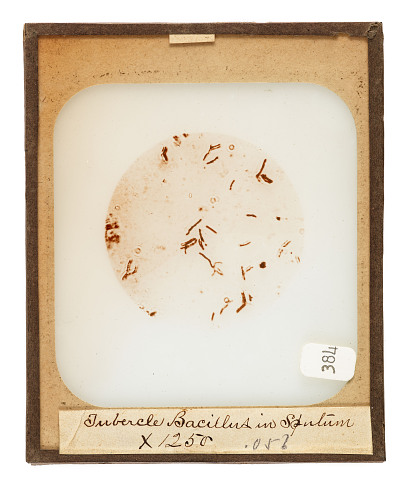 Tuberculosis (TB) is a disease that dates back at least to ancient Egypt and likely has been with humanity much longer. The bacterial infection can attack many parts of the body, including the kidneys, brain, and spine. It most commonly presents itself, however, as an infection of the lungs. When active, its symptoms include coughing, chest pain, weight loss, night sweats, and fever. If untreated, it can be fatal.

Although no effective cure for tuberculosis existed until the discovery of streptomycin in the 1940s, people have long endeavored to prevent, treat, and test for TB.

The hallmark symptom of pulmonary tuberculosis is the production of thick and sometimes bloody discharge from the lungs. For both discreteness and sanitary purposes, TB patients in the late-19th and early-20th centuries sometimes used sputum cups or flasks to collect their mucus. Glass or metal flasks were rinsed and reused, while disposable paper cups could be burned after use. 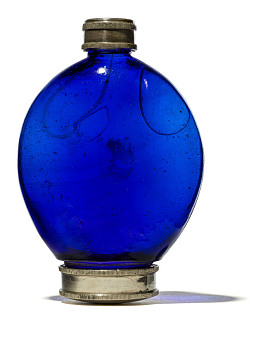 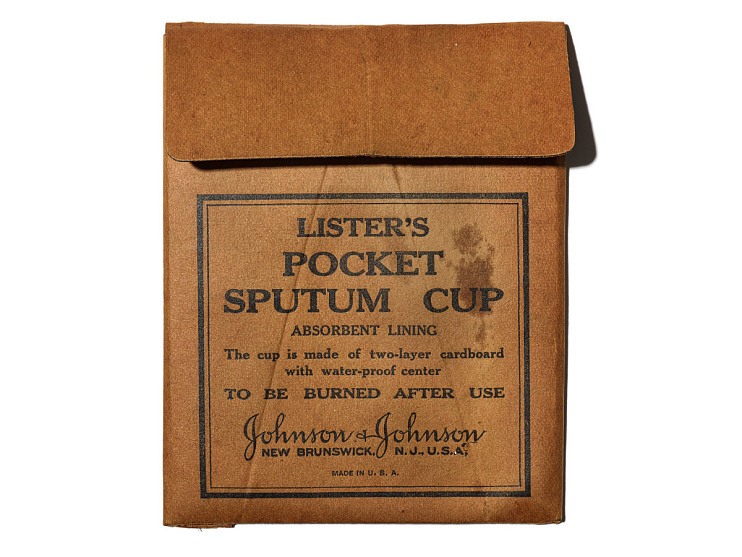 Fresh air was long considered a beneficial treatment for TB. Starting in the mid-19th century, sanatoria in countryside locales became popular sites for patients to retreat and rest. 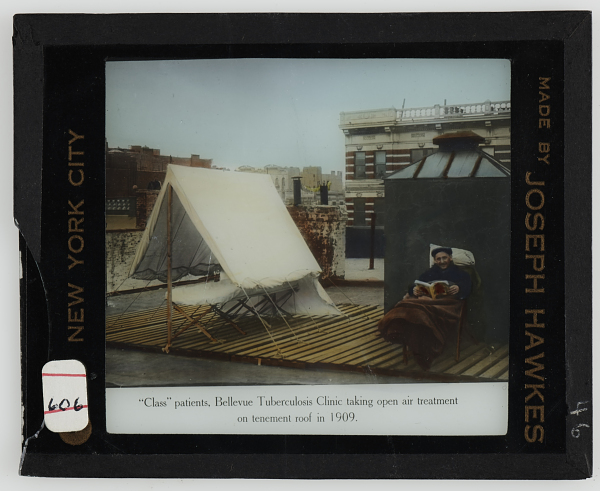 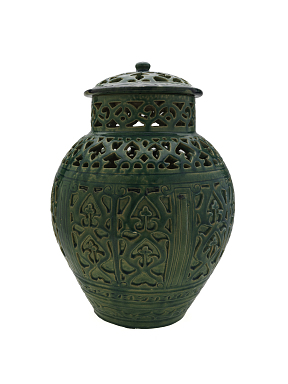 Left: A man rests on a roof in New York City at the Bellevue Tuberculosis Clinic, 1909. Right: Vase, Arequipa Pottery, circa 1913–1916. Arequipa Pottery was established as a Progressive Era experiment in occupational therapy for tuberculosis patients at Dr. Philip King Brown's private Arequipa Sanatorium near Fairfax, California. King argued that requiring his patients to work in the pottery provided them with moral and physical benefits, and allowed people of limited financial means to pay for the healthcare provided by his facility.

With the success of serum treatment for diphtheria and tetanus in the late 19th century, researchers developed anti-tubercle serum. Unfortunately, the anti-tubercle treatment proved ineffective. Earlier, in 1890, German bacteriologist Robert Koch had introduced tuberculin, which also failed as a TB cure. Koch’s injectable tuberculosis derivative found another important purpose, however, as the basis for diagnosing the disease. By 1907, use of the test led to the discovery that patients could be infected with TB without exhibiting symptoms, a condition known as latent TB. 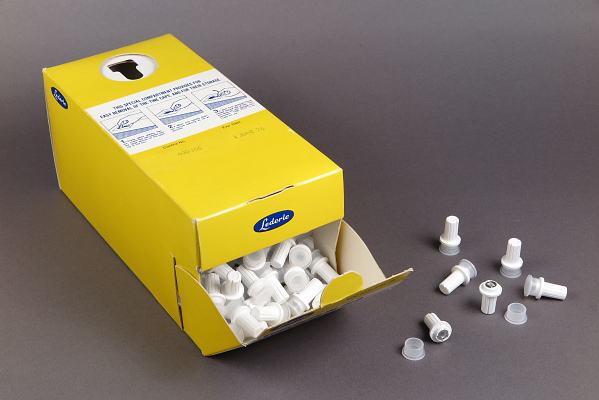 Lederle TB tine test, about 1976. A pure, standardized TB test would not become available until the 1940s.

In 1921, French researchers Albert Calmette and Camille Guérin conducted the first trial of their TB vaccine. It came to be known as the BCG vaccine (Bacillus Camille-Guérin), a reference to their work to grow a weakened strain of the tuberculosis bacillus appropriate for use in a vaccine. Although the vaccine does not prevent infection, it does provide protection against the spread of the disease beyond the lungs and into the brain. Vaccination with BCG is not common in the United States, where TB levels are relatively low, but remains important in other countries.

It took researchers nearly twenty years after the first use of the BCG vaccine to develop effective tuberculosis cures. Several of these drugs are still in use today. Streptomycin, the first widely successful antibiotic against tuberculosis, was isolated from a soil sample at Rutgers University in 1943 by Albert Schatz in the laboratory of Selman Waksman. 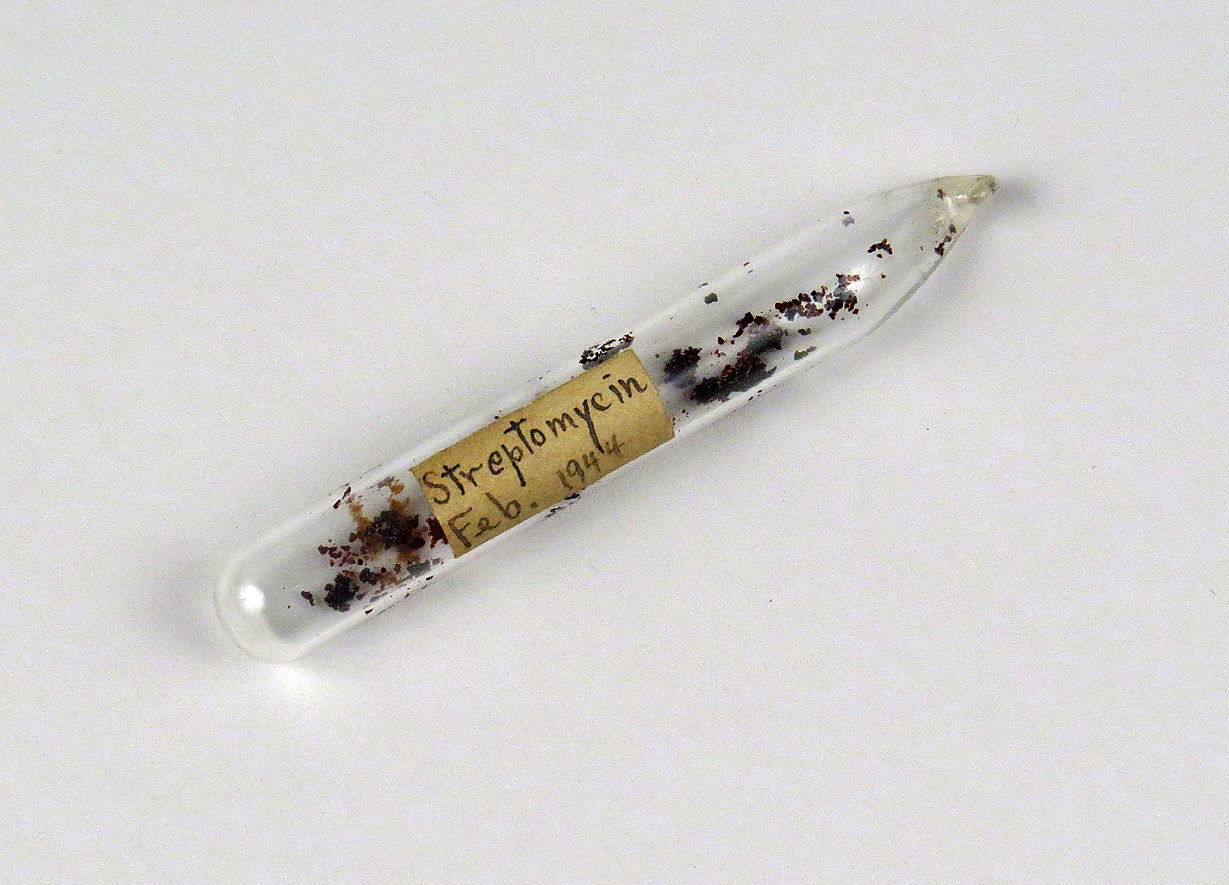 A sample of streptomycin in a sealed test tube from the first lot produced at Rutgers University and sent to the Mayo Clinic in Rochester, Minnesota, for the first animal trials.