Influenza presents an ever-changing target to those who would study or control it. Unlike other infectious diseases, where a single dose of vaccine (or single series of doses) confers long-term protection, flu vaccination is an annual affair. This is because the influenza virus is constantly changing its surface proteins (called antigens), which makes detection by the human immune system more difficult. Most of these mutations are minor, and a bout of influenza is not a serious matter for the majority of the population. However, occasionally the virus changes dramatically, making influenza a killer that can evolve quickly into a pandemic.

Antigenic Drift: How the Influenza Virus Adapts from Vaccine Makers Project on Vimeo.

In the United States, vaccination is recommended for each annual “flu season,” and every year the vaccine is reformulated based on the particular influenza virus strains currently in circulation. Beginning in the 1950s, the World Health Organization has overseen a global network of agencies that work continuously to monitor the virus. Scientists and public health officials use the best information available to determine the most effective constituents of the vaccine.

This intense focus on influenza can be traced back to the worst pandemic in human history – the “Spanish influenza” that struck in 1918 in the midst of the First World War. This episode, with its estimated death toll of 50 million, continues to haunt our consciousness of this disease. Pandemics – and the threat of these episodes – have spurred ongoing investigations of influenza, resulting in a vast body of knowledge that informs the fields of bacteriology, virology, and epidemiology.

The museum’s collections provide evidence of this history and our attempts to understand and control this disease. 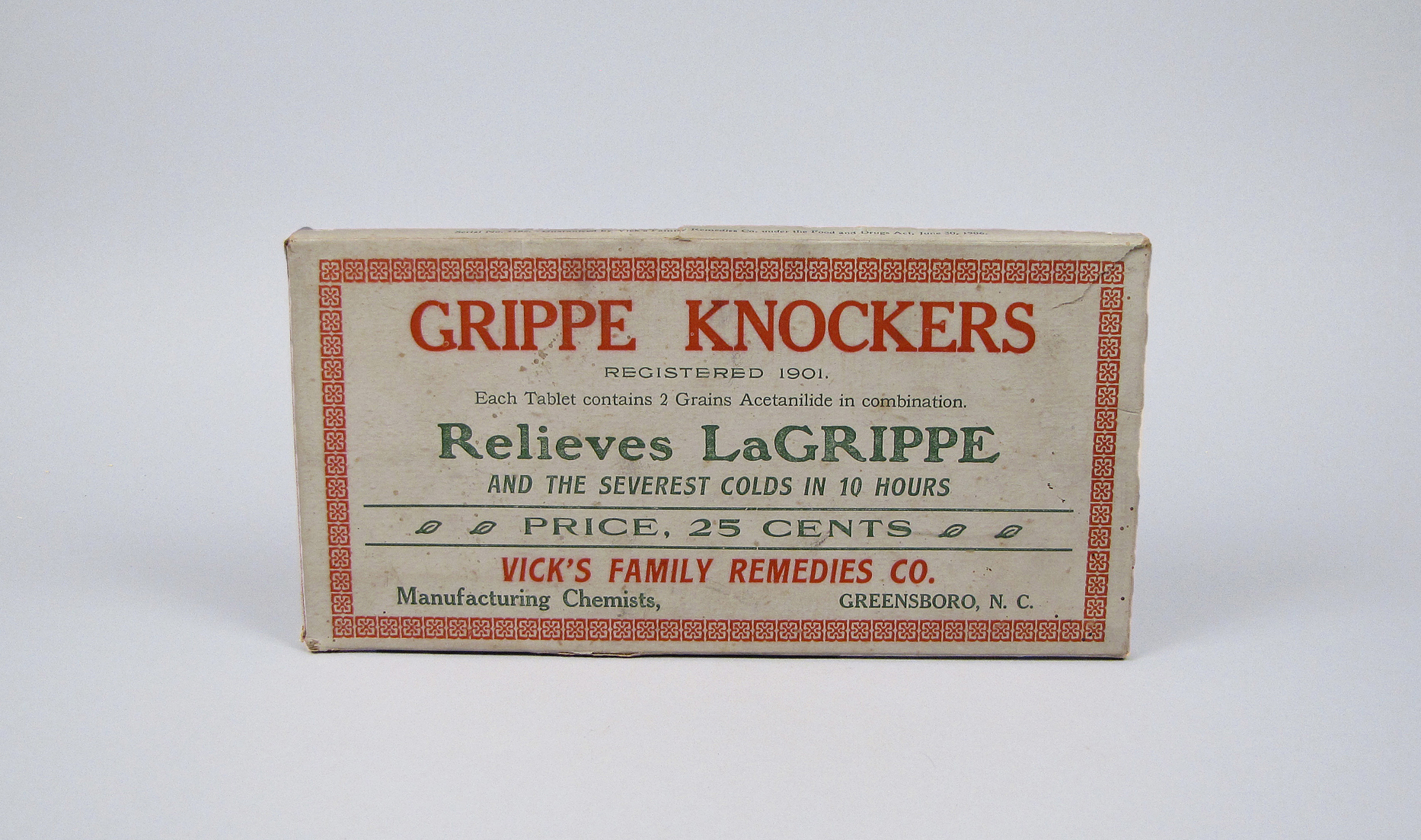 Grippe Knockers, Vick’s Family Remedies Company, ca 1908-1918. Named for LaGrippe, the French term for influenza, Grippe Knockers contained acetanilide, a popular fever and pain reducer first marketed in the 1880s. Analgesics (for aches and pain) and antipyretics (for fever) continue to be popular treatments for bouts of the flu. 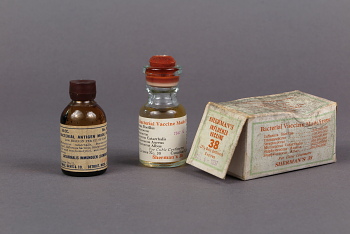 Bacterial vaccines from the 1930s.Catarrhalis Immunogen (Combined) Parke, Davis & Co. and Sherman’s Influenza Vaccine. Although influenza is a viral disease, secondary bacterial infections such as pneumonia, are often responsible for fatalities.

The influenza pandemic of 1918 decimated populations around the world. America’s most promising bacteriologists and research institutions raced to try to identify the pathogen responsible for this devastating outbreak. The most likely culprit was the “influenza bacillus” – also known as “Pfeiffer’s bacillus,” after the German bacteriologist Richard Pfeiffer who first isolated it in flu patients in 1892.

But while researchers often found the bacillus in flu victims, it was not always present. A range of other bacterial pathogens were also isolated from patients including pneumococcus, streptococcus, staphylococcus, and micrococcus catarrhalis. In response to these discoveries, manufacturers developed bacterial vaccines – essentially a mixture of these microorganisms that would provoke an immune response and hopefully fend off the infection. 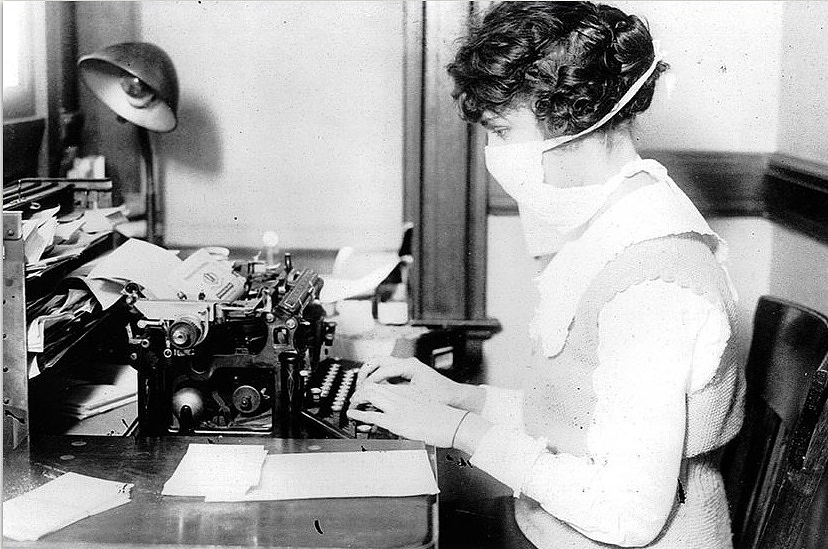 In the decades following the pandemic, pharmaceutical companies sought to improve on these products. Bacterial “immunogens” represented an attempt to separate the antigenic substances which stimulate immunity from the whole bacteria cell. In other words, the immunogen was a purer form of the vaccine, free of extraneous bacterial proteins and toxins that sometimes caused unwanted reactions.

In the 1930’s researchers succeeded in isolating the influenza virus, first from pigs who are also susceptible to influenza, and shortly after from humans. Proof that influenza was a viral disease finally put to rest older theories about the bacterial origin of the disease. Scientists also developed new methods for growing viruses (in fertilized chicken eggs)– a critical achievement for the field of virology and vaccine development. 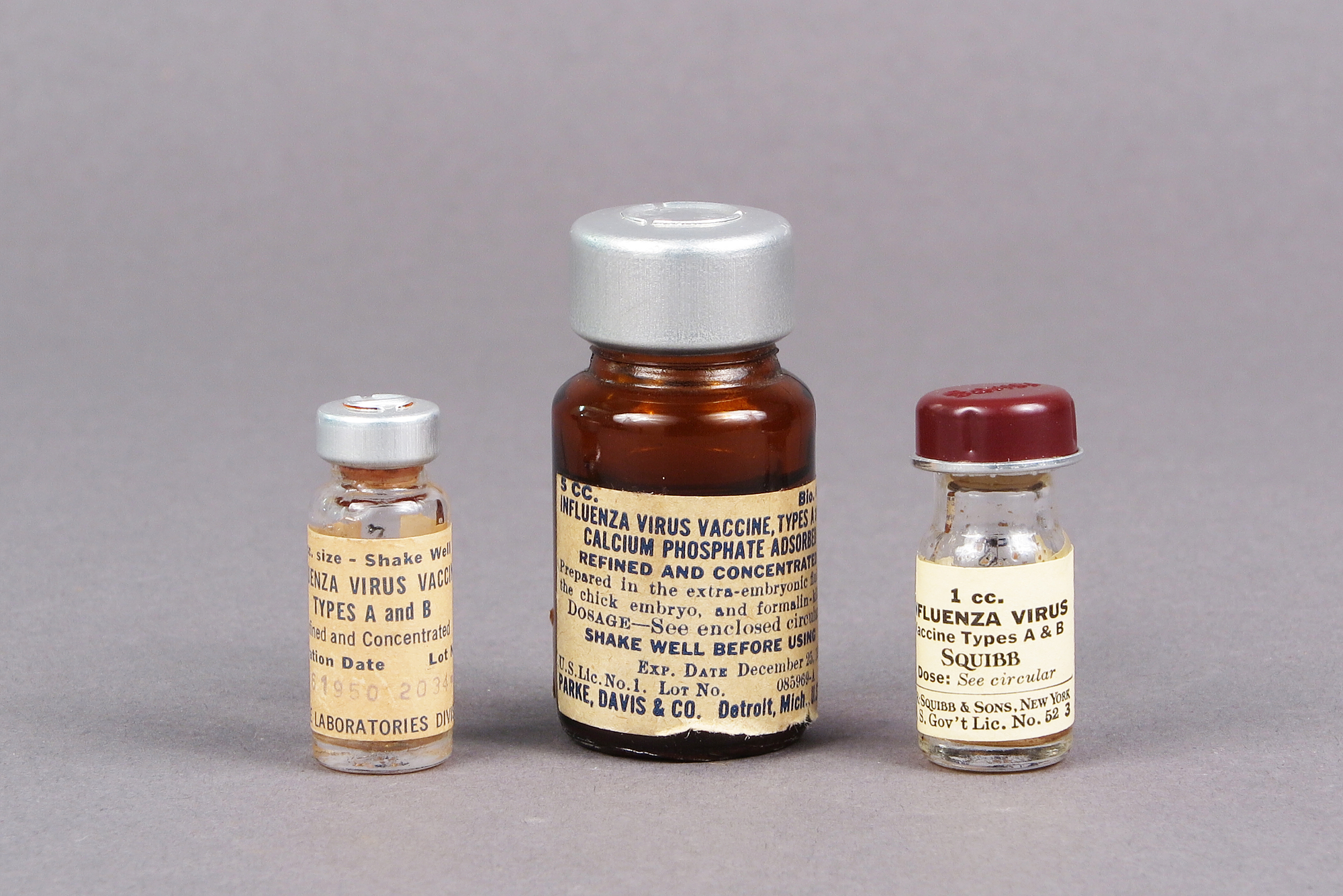 Three examples of early Influenza Virus Vaccine, Types A and B, 1945-1952, made by Lederle Laboratories, Parke, Davis and Co., and E. R. Squibb & Sons. The label on the 1945 Parke Davis vaccine (middle) reads: “Prepared in the extra-embryonic fluid of the chick embryo and formalin-killed.”

In 1941, determined to avoid another wartime pandemic, the US Army established the Commission on Influenza and Vaccine Development. Within two years, the commission developed a vaccine ready for testing. The vaccine included the two main viral strains – Type A and Type B – known to be responsible for human influenza. Scientists had recently discovered a variant of the type A virus, and this too was included in the new vaccine. In hindsight, this may have been an early warning that this shape-shifting virus was not to be conquered easily. In 1945, the Army vaccinated eight million men and, in the following year, the vaccine was available for the general public. 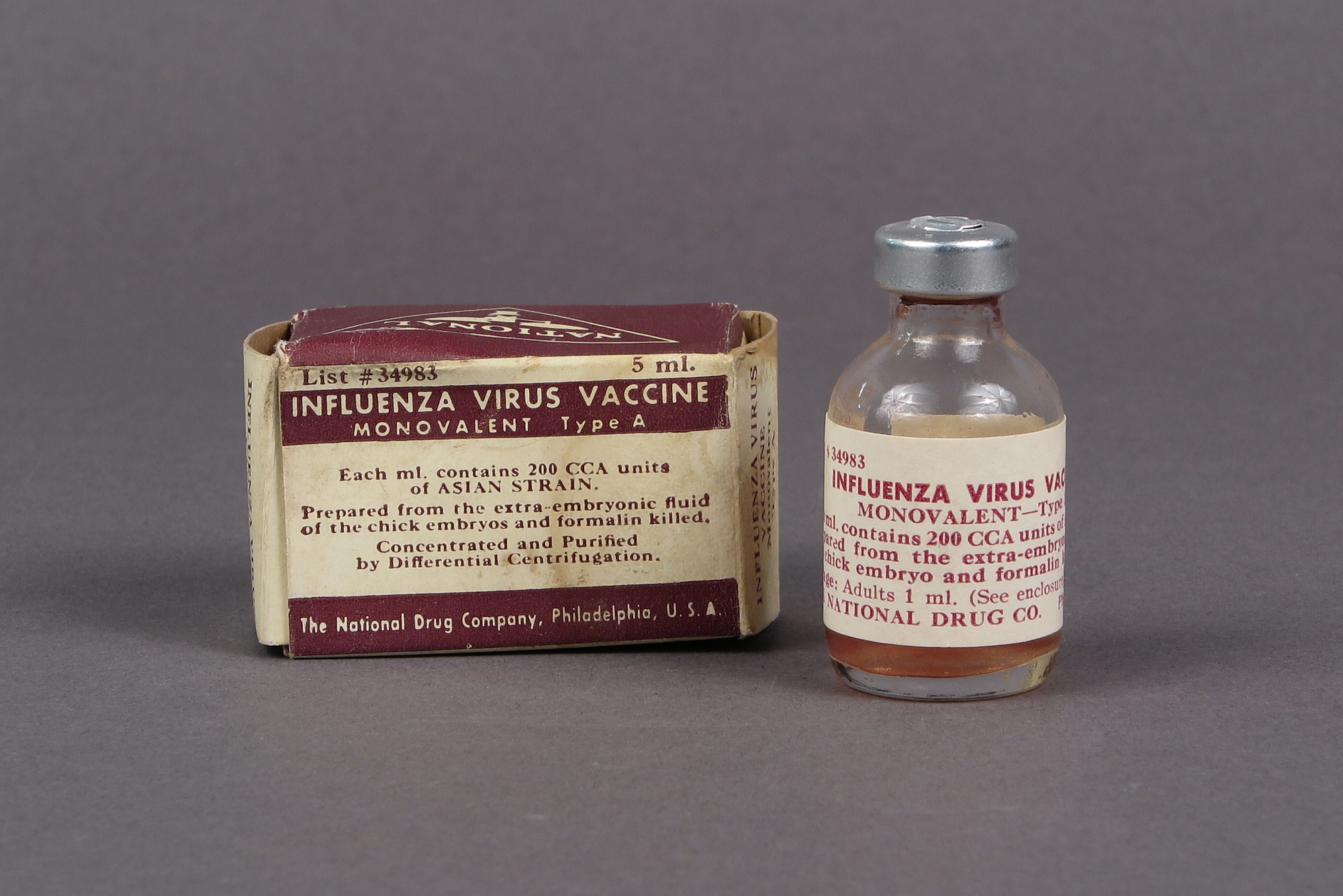 Influenza Vaccine, Monovalent Type A made by the National Drug Company of Philadelphia, PA, 1958-59. This vaccine was formulated specifically to combat the Type A “Asian strain,” which resulted in about 70,000 deaths in the US as part of the Asian Flu pandemic of 1957-58, the first flu pandemic since 1918.

The Asian Flu pandemic of 1957-58 was the first pandemic to emerge after the introduction of the virus vaccine. The episode provided a test case of how government, medical scientists, and vaccine manufacturers would respond to a pandemic threat. News reports of the epidemic in Hong Kong appeared in mid-April 1957; virologist Maurice Hilleman at the Army’s Walter Reed Medical Center acted quickly to procure a specimen of the virus by May; and by mid-August a monovalent Type A vaccine of the new “Asian strain” was ready for testing. The speed of response was commendable, although it was not fast enough to supply vaccine to all who would need it. For those who did get vaccinated, studies showed that the vaccine had reduced incidence of the infection by one-half to two-thirds. 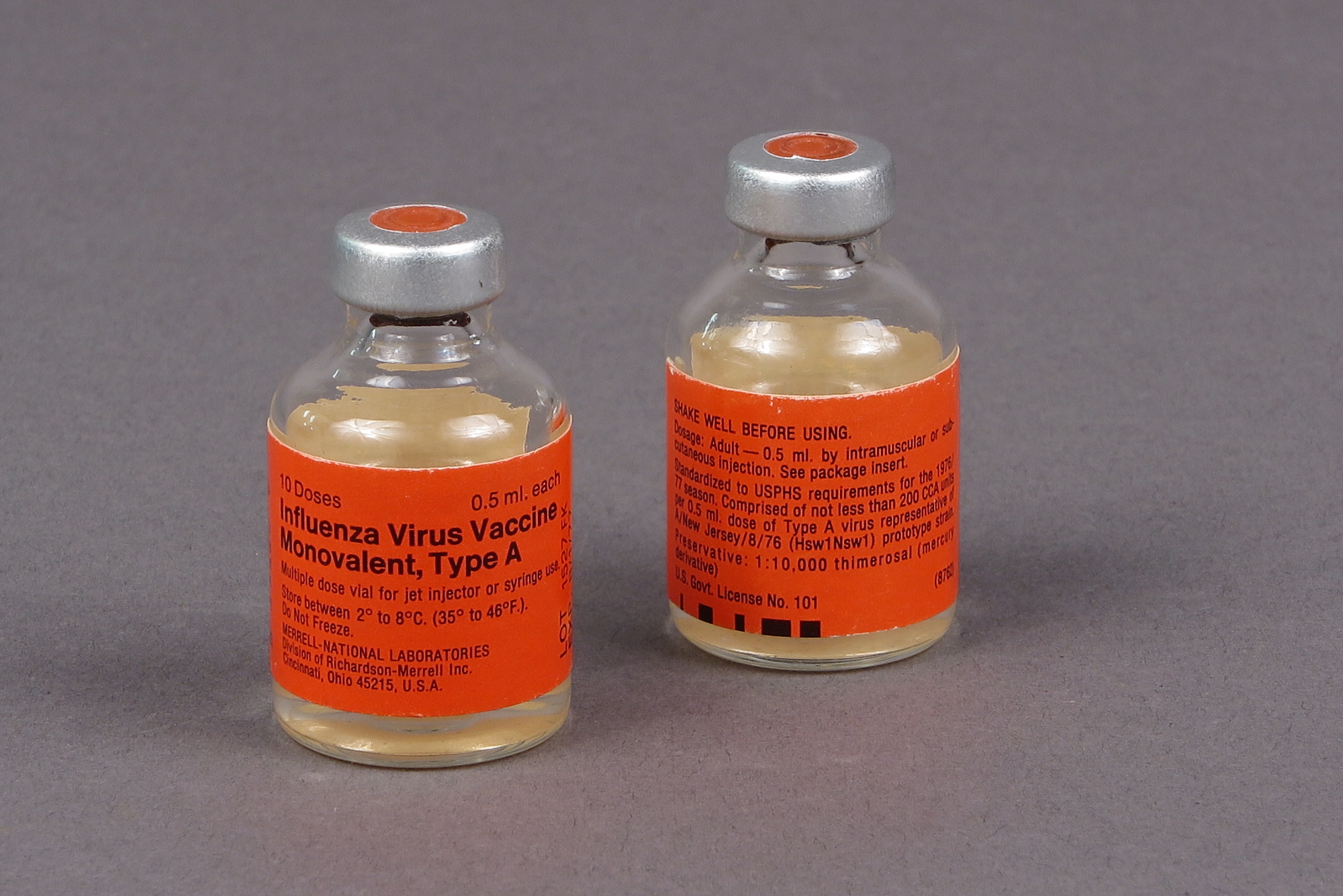 Influenza virus vaccine, Monovalent, Type A, Merrell-National Laboratories. Hsw1Nsw1 is the designation on the label for this H1N1 swine flu variant virus that emerged in New Jersey in 1976.

The swine flu episode of the mid-1970s provides a counterpoint to the Asian pandemic. In 1976, an influenza outbreak at an army base in Fort Dix, New Jersey, caused the death of a young private. Subsequent testing revealed the presence of a swine flu type virus (H1N1) in the victim – the same type associated with the 1918 pandemic. To avoid a potential repeat of the 1918 disaster, public health and government leaders pursued an aggressive vaccination campaign. Their reasoning was summed up thus: “Better a vaccine and no epidemic, than an epidemic with no vaccine.” 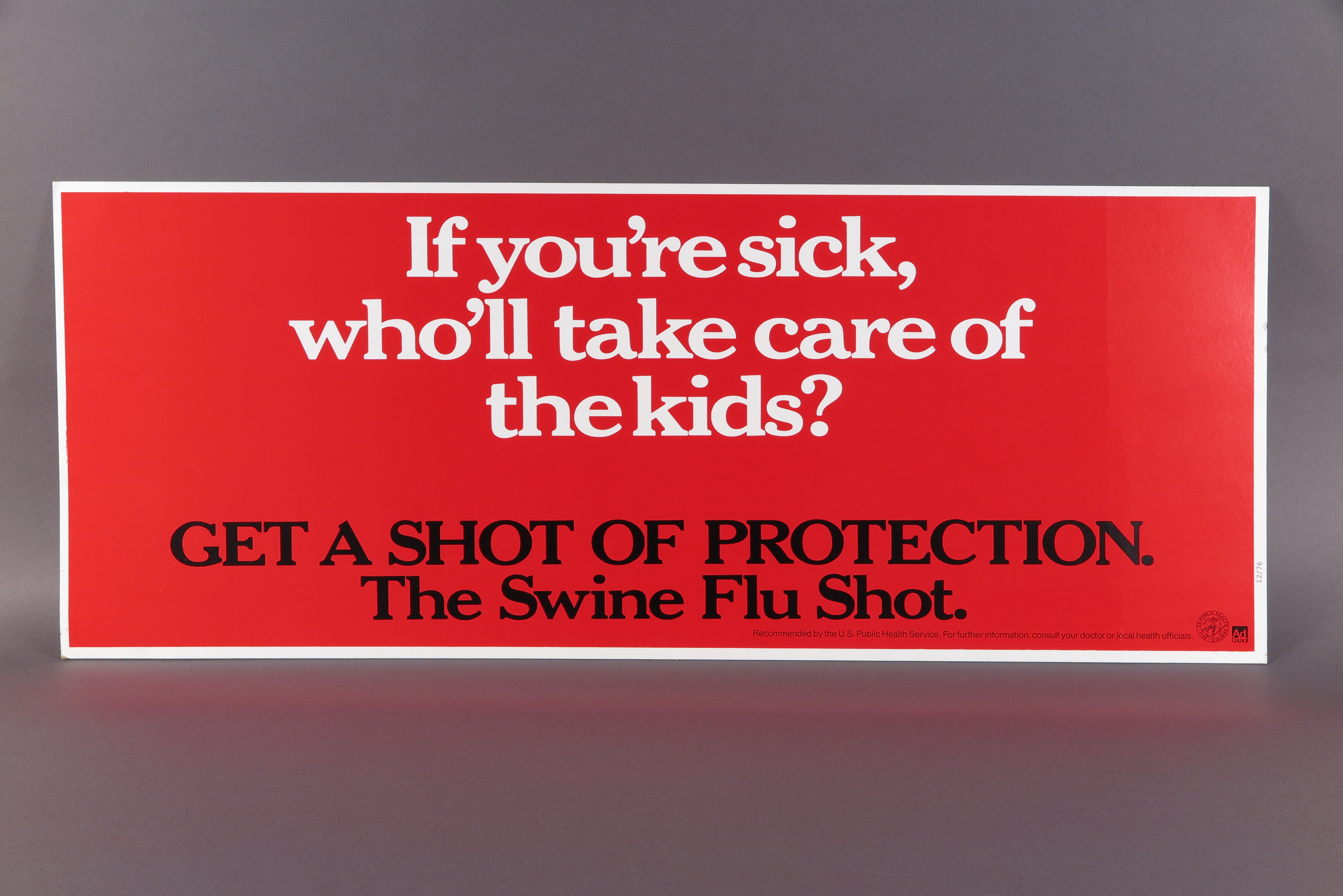 About 40 million Americans were vaccinated before the swine flu campaign was terminated. As it turned out, the virus failed to spread beyond Fort Dix, precluding a feared global pandemic. The episode is largely considered a public health fiasco and has continued to be studied for the insights it offers into the multiple factors that drive decision-making.

The 1976 episode introduced many Americans to “swine flu” and the particular dangers of an influenza strain that moves between species. In spring 2009, swine flu recaptured the headlines when a variant virus emerged in Mexico, and with it, the threat of pandemic and debate about the best response. 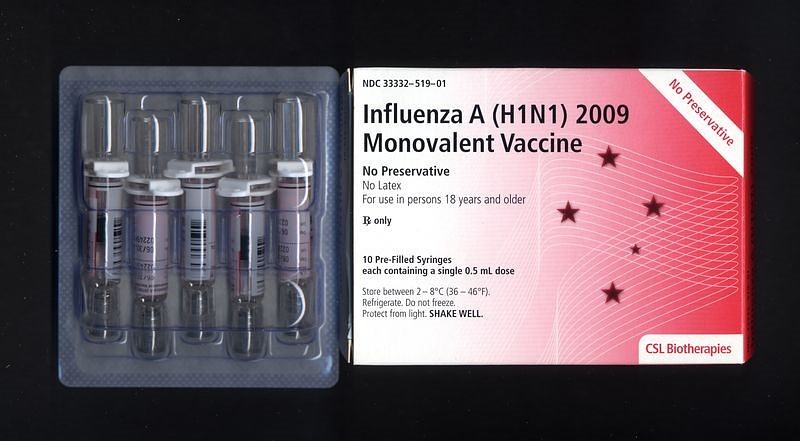