Diphtheria is caused by bacteria. However, it is the toxins produced by the bacteria, rather than the bacteria themselves, that primarily cause symptoms. The same is true of tetanus and pertussis. Currently, all three of these diseases can be addressed by a single, combined vaccine. The museum’s collections contain objects that document the unique development of the diphtheria vaccine.

In 2017, diphtheria is unfamiliar to many Americans. Yet, before the advent of diphtheria antitoxin and vaccines, the disease was an ever-present source of terror. The illness was especially dangerous for young children, and was known as the “scourge of childhood.”

The bacteria that cause diphtheria invade the lining of the respiratory system, where they then produce toxins. As the toxins kill the tissues of the respiratory system, the dead tissue builds up and forms a pseudomembrane – a thick gray layer in the throat and nose that makes breathing and swallowing extremely difficult. The toxins can also damage the kidneys, heart, and nerves. Thus, the disease both poisons and asphyxiates its victims, giving it another name: “the strangling angel.” 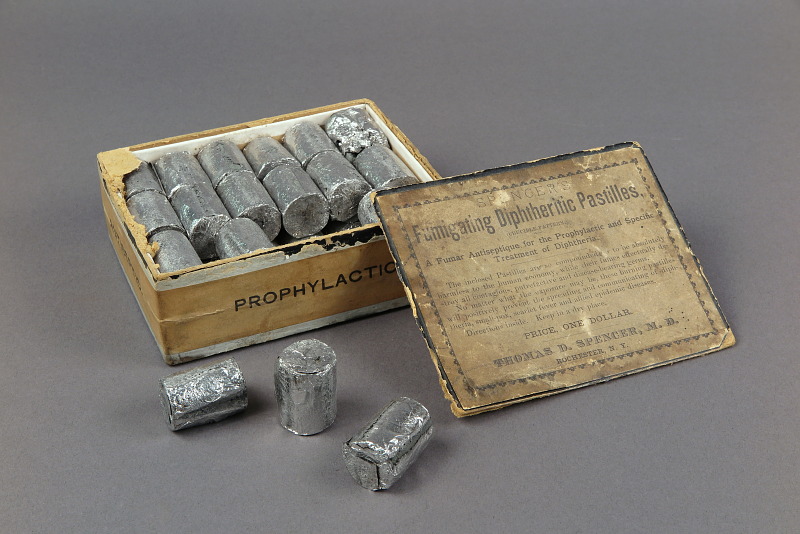 Spencer's Fumigating Diphtheritic Pastilles, ca 1890. The manufacturer of the product claimed that the fumes produced by the pastilles could both prevent and treat diphtheria by destroying “all contagious, putrefactive and disease-bearing germs.”

Until the turn of the 20th century, treatment options were limited. In order to try to save a patient from suffocation by the pseudomembrane, doctors performed tracheotomy or intubation procedures. During a tracheotomy, an incision was cut through the skin of the neck and through the trachea; a tube was inserted into the incision, and the patient then breathed through the tube. Intubation procedures needed no incision, instead physicians attempted to keep the airway open by inserting a small tube within the larynx. These procedures were often unsuccessful. 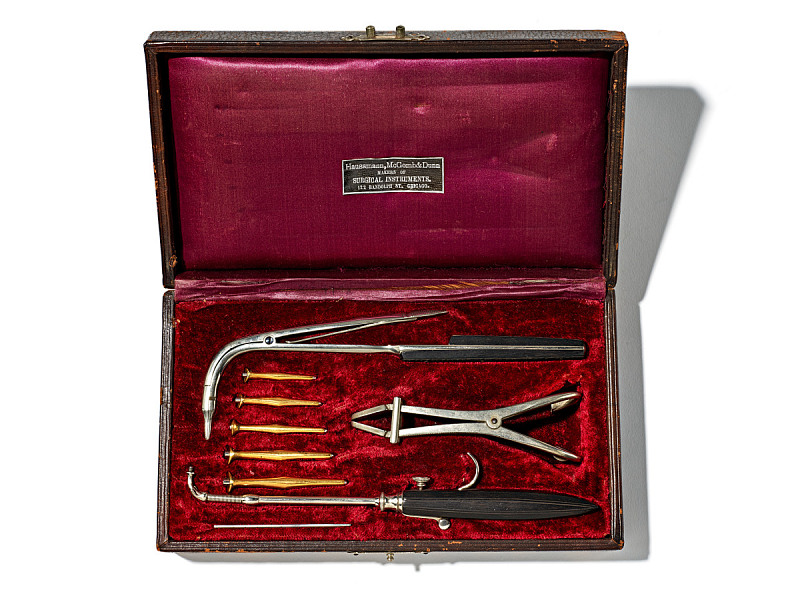 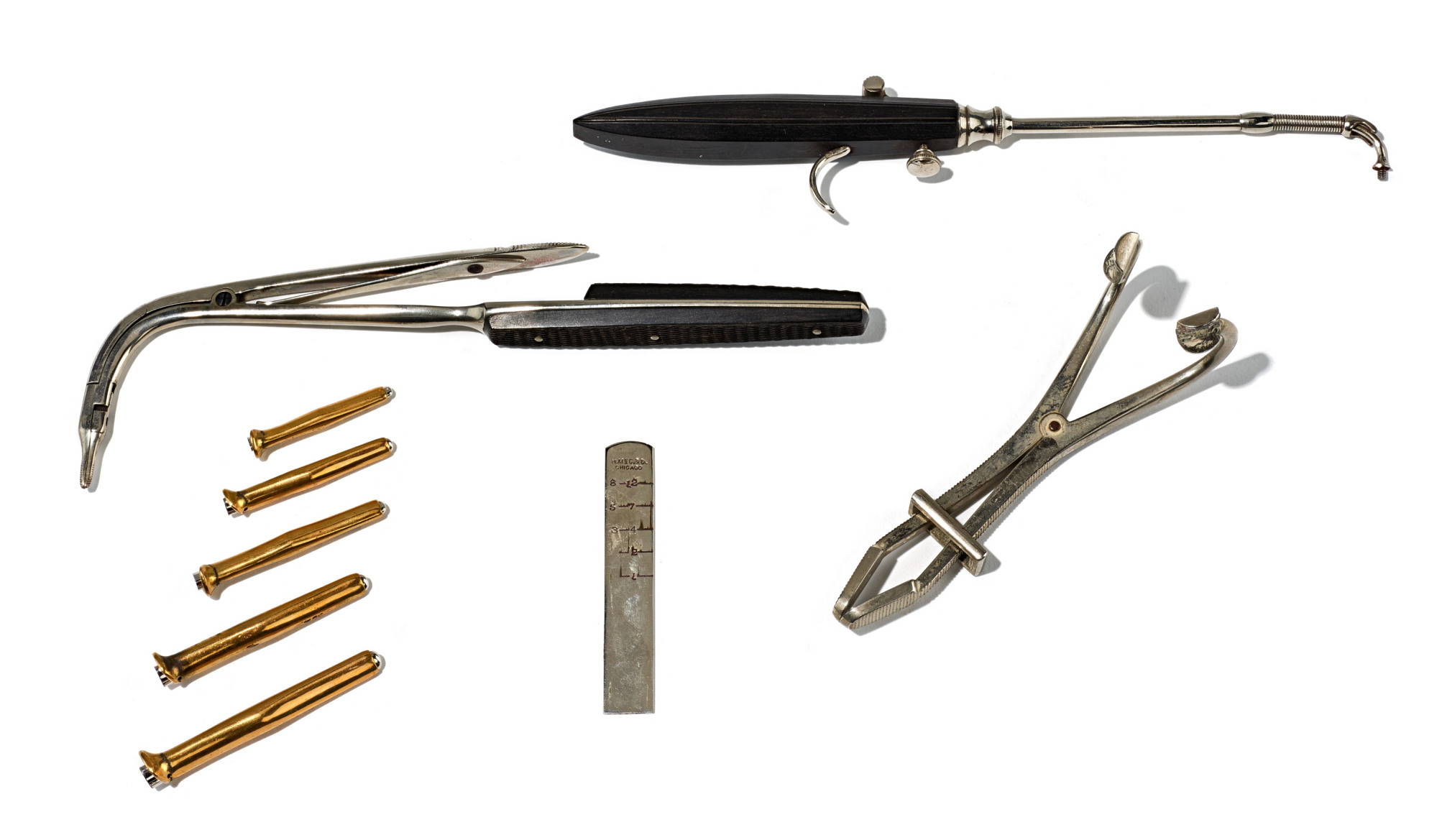 Intubation kit sold by Haussmann, McComb & Dunn, 122 Randolph St., Chicago, 1886-1891. The kit contains a mouth gag to keep the patient’s mouth open. One of the gold-plated O'Dwyer's intubation tubes would be inserted to keep the patient’s airway open. The introducer tool was used to insert the tube, and the extractor tool to remove it.

In 1890, an effective treatment for diphtheria – antitoxin – was discovered by Shibasaburo Kitasato and Emil von Behring in Germany. Pharmaceutical companies and public health agencies began to produce the new serum therapy in earnest.

The New York City Health Department, in particular, pursued largescale antitoxin production. Horses were given gradually increased doses of diphtheria toxins, and their bodies built up antitoxins (antibodies) to neutralize those toxins. The horses were only weakly affected by the toxins, yet their bodies were capable of producing large amounts of antitoxin serum. The horses were bled, and the antitoxin serum was harvested from the blood and processed. When given to a human diphtheria patient, the horse’s antibodies neutralized the toxins poisoning the patient. The Department’s laboratories had a stable of serum production horses with which they provided New York and other areas of the country with diphtheria antitoxin. 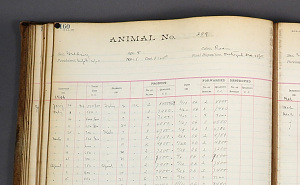 Animal Record Book, 1897. Laboratory workers at the City of New York Department of Health and Mental Hygiene used this book to record descriptions and statistics for each horse they used to produce diphtheria antitoxin. 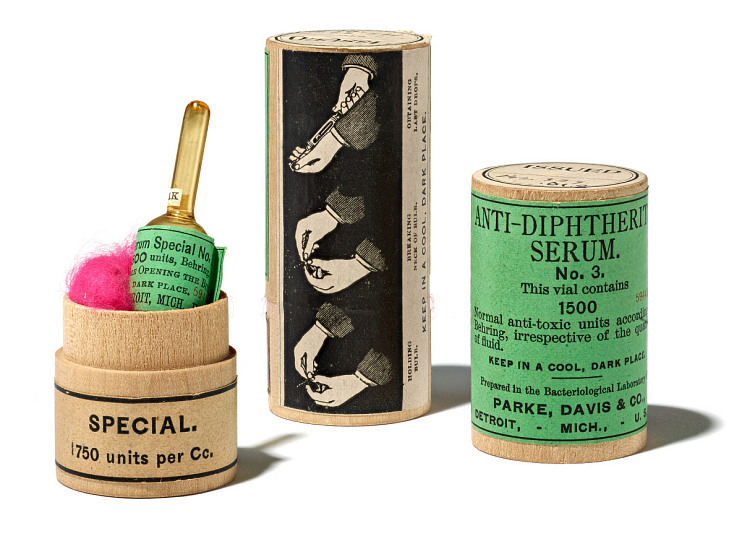 Anti-Diphtheritic Serum No. 3, 1898. In 1898, the museum collected from Parke, Davis & Co. some of the earliest commercial antitoxin manufactured in America. 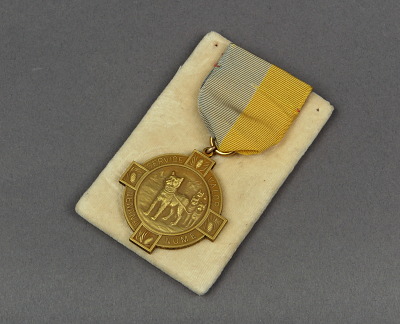 Commemorative medal, Nenana - Nome: For Heroic Service, H. K. Mulford Company, 1925. A replica of the medals given by the H. K. Mulford Company to the dog sled drivers who brought diphtheria antitoxin to Nome, Alaska. The lead sled dog, Balto, became a national celebrity and toured the country.

A 1925 outbreak of diphtheria in Nome, Alaska, brought national attention to the country’s need for diphtheria antitoxin. With the town snowed in, a sled dog team rushed diphtheria antitoxin 674 miles from Nenana to Nome in five days and quelled the epidemic. The event is commemorated annually by the Iditarod Trail Sled Dog Race.

Diphtheria serum was a lifesaving treatment, but it did not prevent diphtheria infection. In 1914, William H. Park of the New York City Health Department devised the first vaccine against diphtheria. Building on earlier work by Behring, Park precisely mixed diphtheria antitoxin with diphtheria toxin. The resulting mixture contained enough toxins to spur the body into creating its own defensive antibodies, but also enough antitoxin to protect the body while it developed those defenses. 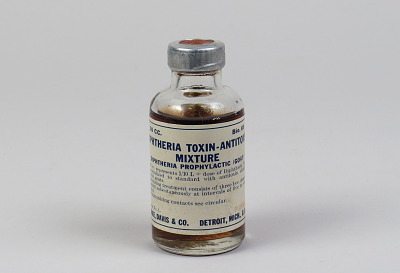 Vaccination campaigns were launched to immunize school children against diphtheria. However, to efficiently vaccinate a large population against diphtheria, a test was needed to determine which people already had immunity to diphtheria and which did not. Fortunately, in 1913, Béla Schick had developed just such a test. A tiny dose of diphtheria toxin was injected into the skin of one forearm and a dose of inactivated toxin was injected in the other arm to serve as a control. If an individual had no immunity (no antibodies), redness and swelling would develop around the injection site. No significant reaction would occur if the individual was immune to diphtheria from prior exposure to the disease.

In the 1923, two researchers, Alexander Thomas Glenny and Gaston Ramon, while working separately, developed the same method for inactivating the diphtheria toxin. The inactivated toxin, known as a toxoid, did not poison the body, but it did trigger the body into making antibodies. However, this new toxoid vaccine did not create the same high level of immunity to diphtheria that the antitoxin-toxin mixture had achieved. Three years later, Glenny developed a method of increasing the immunity produced by the toxoid vaccine: he used an adjuvant – a substance that boosts the body’s immune response to the vaccine. During the next decade, the toxoid vaccine gradually replaced the antitoxin-toxin mixture. The toxoid vaccine became the most effective and accepted method of preventing diphtheria, and is still in use today.