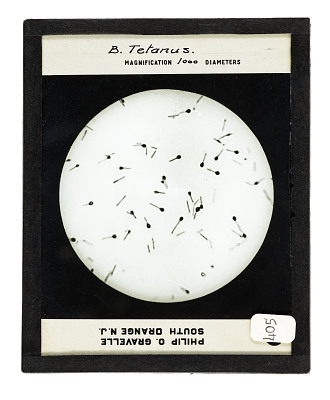 Lantern slide, ca early 1900s. The City of New York Department of Health produced this glass lantern slide showing a magnification of tetanus bacteria. Some of the rod-shaped bacteria have a rounded protrusion on one end – this protrusion is a spore.

Tetanus is caused by bacteria. However, it is the toxins produced by the bacteria, rather than the bacteria themselves, that primarily cause symptoms. The same is true of diphtheria and pertussis. Currently, all three of these diseases can be addressed by a single, combined vaccine. The museum’s collections contain objects that document the unique development of the tetanus vaccine.

Tetanus is caused by the Clostridium tetani bacterium, whose spores are ever-present in the environment, especially in organically-rich soil. When the skin is punctured, such as by a dirty nail, those spores are introduced into the body where they grow into bacteria and produce deadly toxins.

It is the toxins that produce the most wretched and famous symptom of tetanus: intense muscle spasms, especially in the jaw, from which the common name "lockjaw" comes. The toxins can also cause suffocation and irregular heartbeat, and the spasms can be strong enough to break bones. In the early 1900s, medical organizations reported that untreated tetanus killed up to 85% of those infected.

Lockjaw Forceps, ca early 1900s. The short ends of the tool (right side) were put between the teeth of a lockjaw victim. Squeezing the handles (left side) of the forceps ratcheted the short ends apart, forcing open the jaws of the tetanus victim. From the instrument set of Dr. William Park of the City of New York Department of Health.

During the 1890s, the combined work of Shibasaburo Kitasato, Emil von Bering, and Edmond Nocard demonstrated that tetanus antitoxin had both protective and immunizing effects against tetanus toxins. Researchers and manufacturers continued to refine the serum, and the museum’s collections contain examples of some of the earliest tetanus antitoxin produced in the United States. 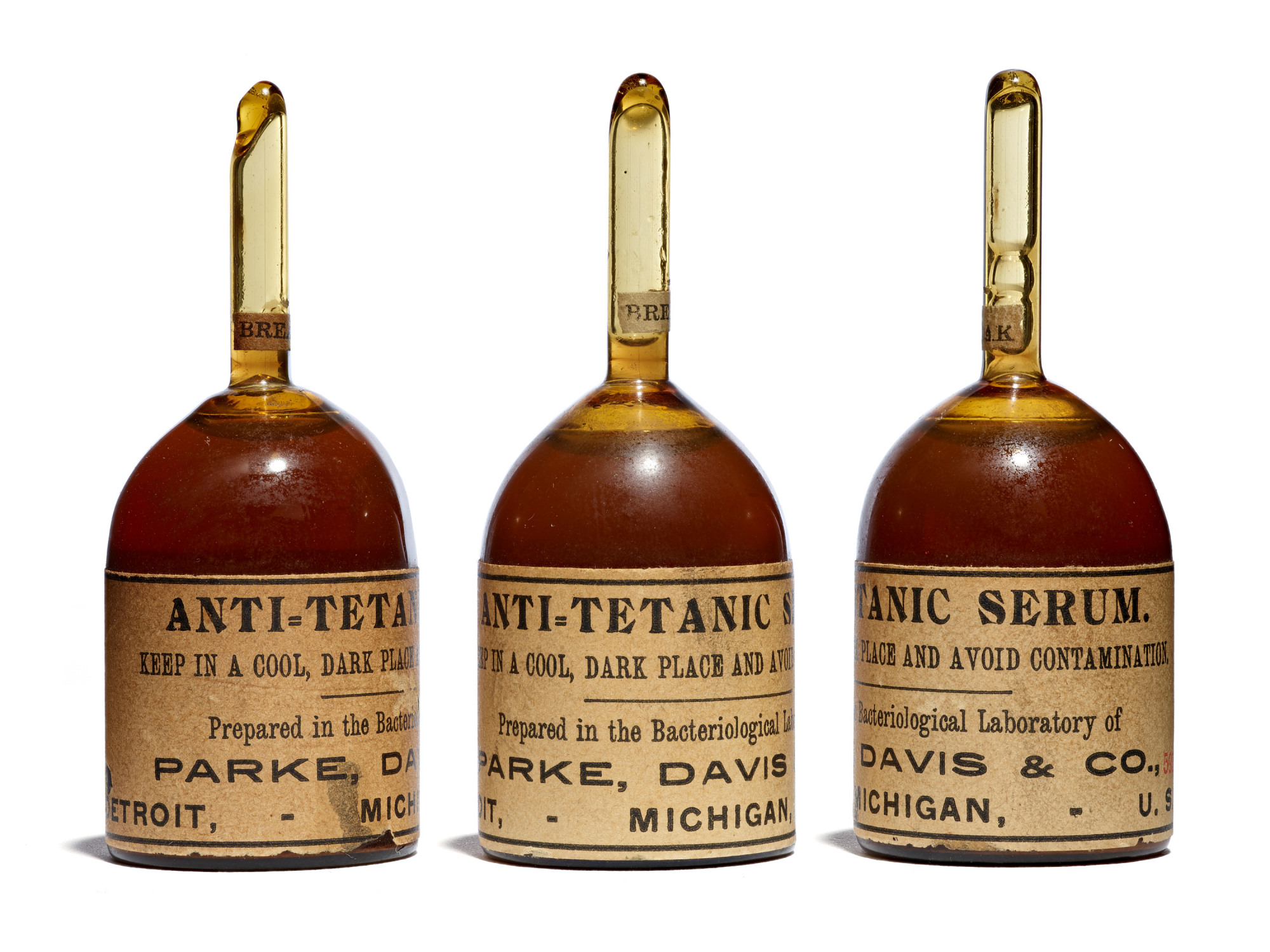 Anti-Tetanic Serum, 1898. Like diphtheria antitoxin, these ampoules of Anti-Tetanic Serum from Parke, Davis & Co. were produced in horses. Horses were given gradually increased doses of toxins, and their bodies built up antitoxins (antibodies) to neutralize those toxins. The horses were bled, and the antitoxin serum harvested from the blood. Given to a human tetanus patient, the horse’s antibodies neutralized the toxins poisoning the patient. 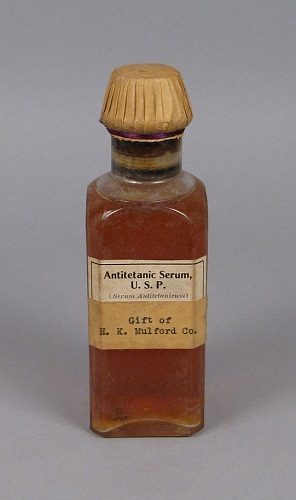 Antitetanic Serum U.S.P., 1920. The museum collected this serum from the H.K. Mulford Company as part of an exhibition on "animal products of the U.S. Pharmacopoeia and National Formulary."

World War I was instrumental in the effort to find a way to treat tetanus. Much of the fighting occurred in fields, where wounds were constantly exposed to tetanus spores. Further, the explosive power of modern weapons drove dirt and shrapnel deep into wounded tissue, where conditions are conducive to the bacterium’s growth.

Desperate to avoid tetanus’s enormous fatality rate, military doctors invested heavily in the new serum therapy. They used antitoxin for both prevention and treatment, experimenting with the size and number of doses. A soldier who showed potential symptoms of tetanus, or wounds conducive to tetanus, was given a course of tetanus antitoxin. It is estimated that hundreds of soldiers likely suffered serum sickness – their bodies had a serious allergic reaction to the serum. However, tetanus antitoxin is credited with saving hundreds of thousands of lives during the war.

A vaccine to prevent tetanus – tetanus toxoid – was introduced in 1924. Tetanus toxoid is an inactivated form of the toxin; it teaches the body to recognize and produce antibodies against the toxin, but is not able to damage the body itself. Yet, the vaccine was not frequently used until World War II, when it became one of the routine vaccinations given to all American soldiers.

On the heels of the war, vaccination with tetanus toxoid became common for all Americans. Tetanus infection plummeted. 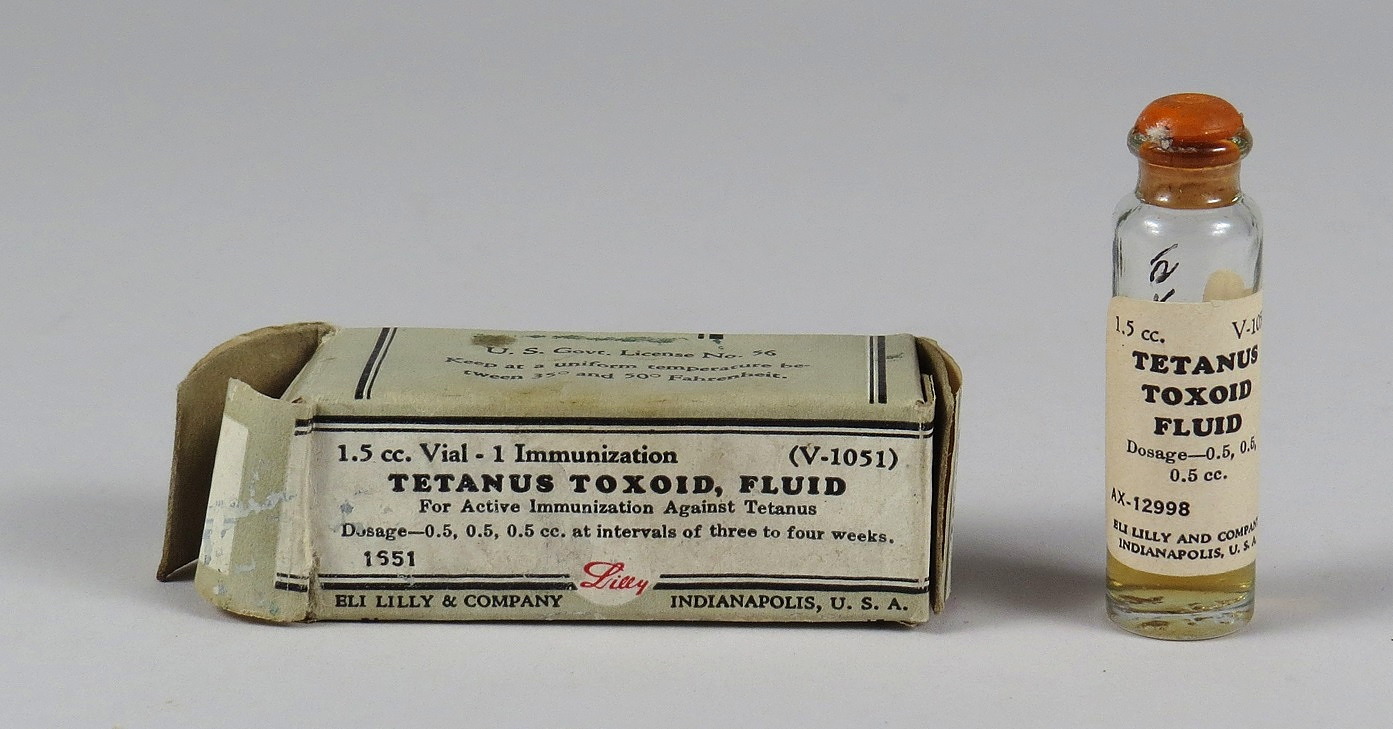 Routine vaccination has ensured that death from tetanus is rare in the Unites States. However, a vaccination booster must be repeated every ten years to keep that immunity. People who do contract tetanus may be treated with a modern form of antitoxin, tetanus immune globulin.

In countries where tetanus vaccination is not common, the disease is a major cause of death in newborns when the tetanus bacteria colonize the umbilical cord wound. However, if a pregnant woman has been vaccinated, her immunity is passed to the baby.