The development of antibody-based technologies has transformed health care. It also provides a fascinating story of the intersections of science, medicine, and industry, one that highlights the contributions of individuals and institutions from across the globe and across generations, all in an effort to advance knowledge, improve medical treatments, and capitalize on new therapeutic tools.

The museum’s rich collections span the entire history of antibody-based therapies and diagnostics. From the first curative serums developed in the 1890s to today’s powerful monoclonal antibody (mAb) drugs, medicines derived from antibodies have been a part of American life for more than a century. These medicines have both drawn from and driven investigations of the body’s immune system and the search for better-targeted therapies—the so-called “magic bullets” of medicine.

Research in bacteriology and the role of antibodies has resulted in new preventative treatments as well. Vaccines, beginning with Edward Jenner’s introduction of the smallpox vaccine in the 1790s, have had a profound effect on our experience of illness. Rather than containing antibodies, these products provoke the body to produce its own antibodies, thereby conferring long-term immunity. Vaccines have led to the eradication of one disease—smallpox—and have helped eliminate several other once deadly diseases from large areas of the world.

Medical diagnostics also have exploited the power of antibodies. In the early 1980s, the ability to produce pure strains of antibodies led to some of the first successful products in the emerging biotech industry. These simple, fast, and accurate diagnostic devices, which include the now familiar home pregnancy test, trace their history back to the first antibody-based tests created in the late 19th and early 20th centuries to detect typhoid, syphilis, and other infectious diseases.

This website explores over 1,000 objects related to the history of vaccines, serums, antitoxins, diagnostics, and other therapies, which all employ the power of antibodies to protect and improve health. The website will grow as the museum acquires new material and enhances individual object records with further information.

The Antibody Initiative was made possible through the generous support of Genentech. 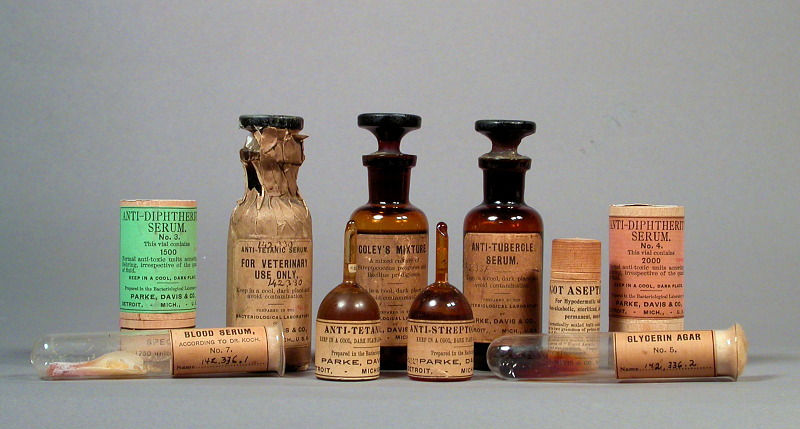