This trumpet was made by Franz Hörth in Saarbrücken, Germany in 1913. It is an E-flat trumpet made of brass with nickel silver trim and has three mechanical rotary valves. This trumpet is engraved:

According to the accession paperwork, this trumpet was one of 12 instruments captured from the Jäger-Regiment zu Pferde Nr. 8 (Eighth Jaeger German Mounted Band) during WWI.

Franz Hörth (also spelled Hoerth) (1862-1932) founded his musical instrument firm in what was known as St. Johann in 1898. This small fishing village merged with two other villages to form Saarbrücken around 1909. Hörth’s son-in-law Richard Wolff became manager of the company around 1921, then known as “Franz Hoerth, metal and wood instrument maker, musical instruments and talking machines." 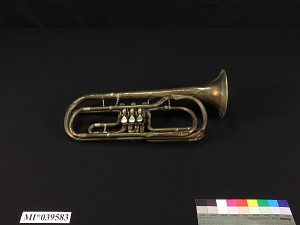 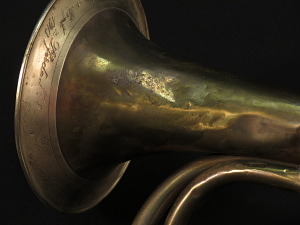 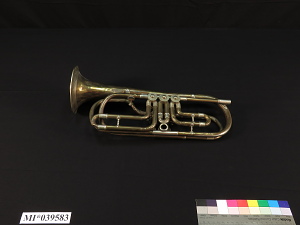