Hand-colored cinema card for actress Lupe Vélez with a short biography on the back. Mexican-American actress Lupe Vélez was born María Guadalupe Villalobos Vélez on 18 July 1908 in San Luis Potosí, Mexico. Vélez started as a vaudeville dancer in Mexico before moving to U.S. In 1927, she made her first film appearance in The Gaucho opposite actor Douglas Fairbanks. With her memorable role in the 1929 film Lady of the Pavements (UK title: Lady of the Night), Vélez earned leading lady status. With "talkies" becoming more popular, Vélez turned to comedy roles where she became known for her characterization of feisty Latina women. In the early 1940s, a series of films was created especially for her, titled Mexican Spitfire. These films were quite popular, and Vélez became known as “The Mexican Spitfire” and “The Hot Pepper.” Overwhelmed by the struggles of her personal life, Vélez tragically committed suicide by overdose on 13 December 1944. Her star on the Hollywood Walk of Fame honors her contributions to the film industry. 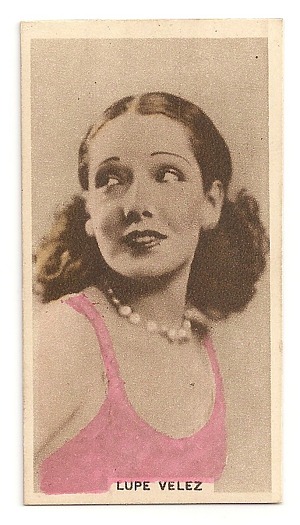 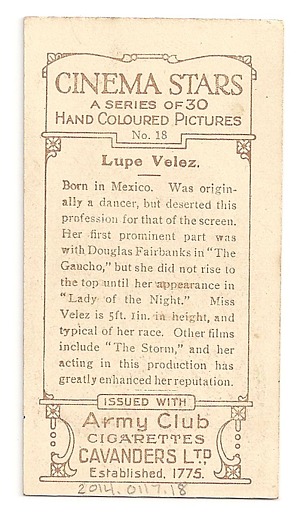