This ticket is from a concert given by Jenny Lind on October 18, 1850. The ticket is printed:

THIS ENTITLES THE BEARER TO A
$7.00 SEAT
At Mad'lle Jenny Lind's Concert,
Friday Evening, October 18, 1850.
The Seat will be pointed out by the Ushers.
P.T. Barnum

Johanna Maria “Jenny” Lind (1820-1887) was a Swedish soprano, famously known as the "Swedish Nightingale." She was one of the most highly regarded singers of the 19th century. American showman P. T. Barnum contracted Lind to undertake a concert tour throughout the United States beginning in 1850. Lind terminated her contract with Barnum amicably in 1851 and continued to tour for nearly a year under her own management.

Advance publicity created such a demand for concert tickets that Barnum sold them at auction. Throughout the tour, popular frenzy for Jenny Lind tickets and merchandise created “Lindomania” raising large sums of money for Lind and Barnum. Lind donated much of her profits to charitable causes. 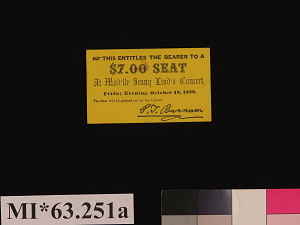 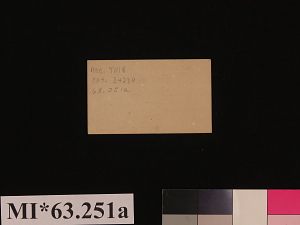