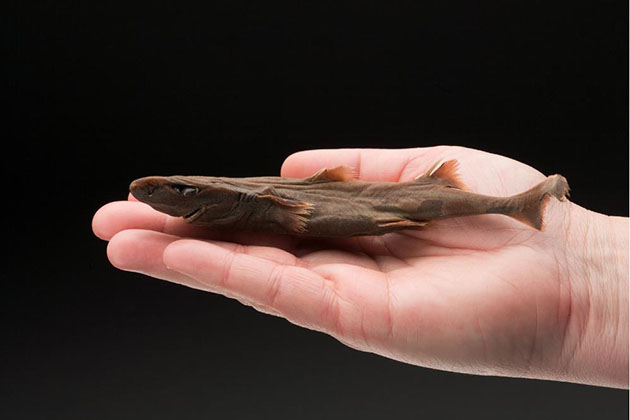 The dwarf lantern shark (Etmopterus perryi) is the smallest shark, and it can fit in a human hand. Dark brown with black markings, it has large, elongated eyes that allow it to see in almost complete darkness in its habitat deep in the ocean.

Little is known about the mysterious dwarf lantern shark. It has only been spotted a few times off the northern tip of South America at depths between 283–439 meters (928–1,440 feet). The specimen pictured here was discovered in the Caribbean Sea off the coast of Colombia in 1985 at a depth of 290 meters (950 feet).

Like other lantern sharks, the dwarf lantern shark has light-emitting organs called photophores along its belly and fins. The illuminated belly blends in with beams of sunlight that filter into the ocean.

Read about other unusual sharks such as goblin and ghost sharks and learn about sharks’ anatomy, biology and conservation at the National Museum of Natural History’s Ocean Portal.