Guardians of More Than a Galaxy 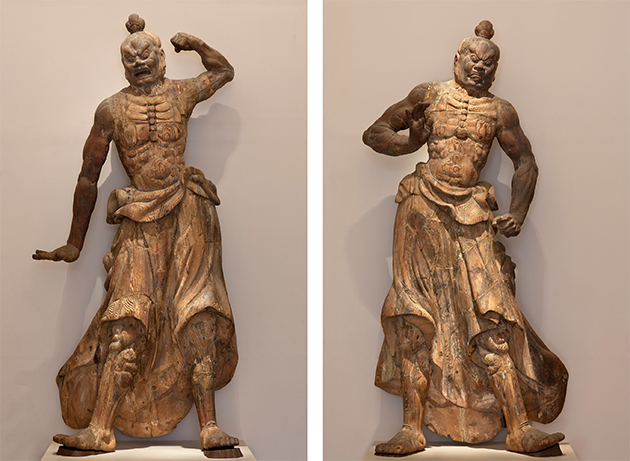 These two large, wooden guardian figures once kept watch over the Buddha and his followers outside Ebaradera temple in Sakai, Japan. Their size (7 feet tall), active poses and bulging muscles illustrate their power to drive away evil. The statues, on display at the Smithsonian’s Freer Gallery of Art, were carved in the likeness of the Kongorikishi, or Ni-o, benevolent kings who accompanied the Buddha and protected him during his travels in India. Their wrathful, violent appearance was believed to ward off evil spirits and protect the temple grounds from thieves.

The open-mouthed sculpture is saying “ah,” the Japanese sound for the beginning of the alphabet. The closed-mouthed guardian is saying “om,” which is the alphabet’s last sound. Together, the guardian figures are thought to demonstrate that the realm of the Buddha is infinite.

The guardian figures were originally painted red, but their color has worn off after centuries of exposure to the elements.

Not even fierce guardians can defy the weather.

For more about Buddha at the Smithsonian: the Arthur M. Sackler Gallery’s exhibition “Encountering the Buddha: Art and Practice Across Asia” is on view through Nov. 29, 2020. Go to the Smithsonian’s website to see collection images related to Buddhism or view a 3-D rendering of the ancient Chinese statue “Cosmic Buddha” in a video from Smithsonian X 3D.