Wrath of the Titans to Launch at Two Smithsonian Theaters 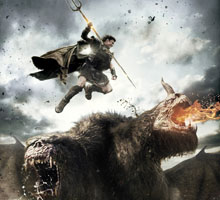 Smithsonian Theaters presents Wrath of the Titans at the National Air and Space Museum’s Airbus IMAX Theater at the Steven F. Udvar-Hazy Center in Chantilly, Va., March 30. The film will also launch in 3-D April 13 at the Johnson IMAX Theater in the National Museum of Natural History in Washington, D.C.

Tickets are on sale now. Individual tickets may be reserved and purchased up to two weeks in advance. Groups of 10 or more may reserve tickets now for any date during the film’s run. The public may visit any Smithsonian Theaters box office, call toll-free (866) 868-7774, TTY (202) 633-8850 or visit www.si.edu/IMAX for information or to purchase tickets.

The Airbus IMAX Theater is located on the main floor of the Steven F. Udvar-Hazy Center at 14390 Air and Space Museum Parkway in Chantilly. The theater’s 75-by-62-foot screen is the largest in northern Virginia. The Johnson IMAX Theater is located on the first floor of the National Museum of Natural History at 10th Street and Constitution Avenue N.W. The theater’s 90-by-60-foot screen is the largest in Washington, D.C.