What Does the Tooth Fairy Do with All Those Teeth? 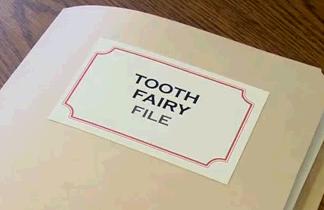 The Smithsonian’s National Museum of American History unveils a YouTube video today that finally answers the age-old question, “What does the tooth fairy do with all of those teeth?” The Tooth Fairy File is a “mockumentary” aimed at parents and caregivers of young children to explain to believers what actually happens to all the teeth. Through the video, at http://www.youtube.com/smithsonianamhistory, accompanying blog posts at http://blog.americanhistory.si.edu/ and historic information, the museum seeks to attract and inspire visitors 6 to 8 years of age.

“The goal of the project is to introduce children to historical artifacts and museums and to encourage children and their adults to come to the Smithsonian,” said John Gray, director of the museum.

February is National Children’s Dental Health Month and the museum has joined with the American Academy of Pediatric Dentistry, an authority on children’s oral health, to reach dentists, parents and caregivers of children about the tooth fairy at the Smithsonian, along with history of dental health.

“We are thrilled to collaborate with the museum as the ‘tooth fairy’ provides a platform and opportunity for children, parents and caregivers to discuss good oral health practices,” said Dr. Joel H. Berg, AAPD president. “Seeing a baby tooth fall out at the right time is a rite of passage and measure of success in maintaining overall oral health.”

“Wacky but believable,” is how Medical History Curator Katherine Ott, executive producer of the video, describes the mockumentary.

The Tooth Fairy File features Gray and curators as well as security guards, public program staff and children from the Smithsonian Early Enrichment Center, who serve as guides on a behind-the-scenes tour of the museum’s photo history, archives, music, sports and entertainment storage rooms as well as other on-site locations not typically seen by the public. Clues appear in the form of a variety of objects in the museum’s collection, including a 1930s WPA puppet, examples of 19th century photography, mid-20th century sheet music, a tooth key from the early 1800s and the museum’s extensive coin collection. The video also references Ratoncito Pérez, the South and Central American version of the tooth fairy.

This story of mysterious happenings at the museum leads viewers to discover the object that unites all of the clues—a fairy’s cache of teeth hidden in the ceiling of a display case, confirming to children that the museum is indeed where the tooth fairy deposits the teeth she collects. The teeth are actually artificial and date from the mid-20th century and are part of the Smithsonian’s dental collection. The cache of teeth will be on display in one of the Artifact Walls on the first floor beginning Feb. 12.

About the National Museum of American History

The museum is currently renovating its west exhibition wing with new galleries on American business, democracy and culture; new spaces for the Lemelson Center for the Study of Invention and Innovation; and a Hall of Music for live performances. The museum is located at 14th Street and Constitution Avenue N.W., and is open daily from 10 a.m. to 5:30 p.m. (closed Dec. 25). Admission is free. Website: http://americanhistory.si.edu.

About the American Academy of Pediatric Dentistry

The American Academy of Pediatric Dentistry is the recognized authority on children’s oral health. As advocates for children’s oral health, the AAPD promotes evidence-based policies and clinical guidelines; educates and informs policymakers, parents and guardians, and other health care professionals; fosters research; and provides continuing professional education for pediatric dentists and general dentists who treat children. Founded in 1947, the AAPD is a not-for-profit professional membership association representing the specialty of pediatric dentistry. Its 8,400 members provide primary care and comprehensive dental specialty treatments for infants, children, adolescents and individuals with special health care needs. For further information, visit the AAPD website at http://www.aapd.org or the AAPD’s consumer website at http://www.mychildrensteeth.org.