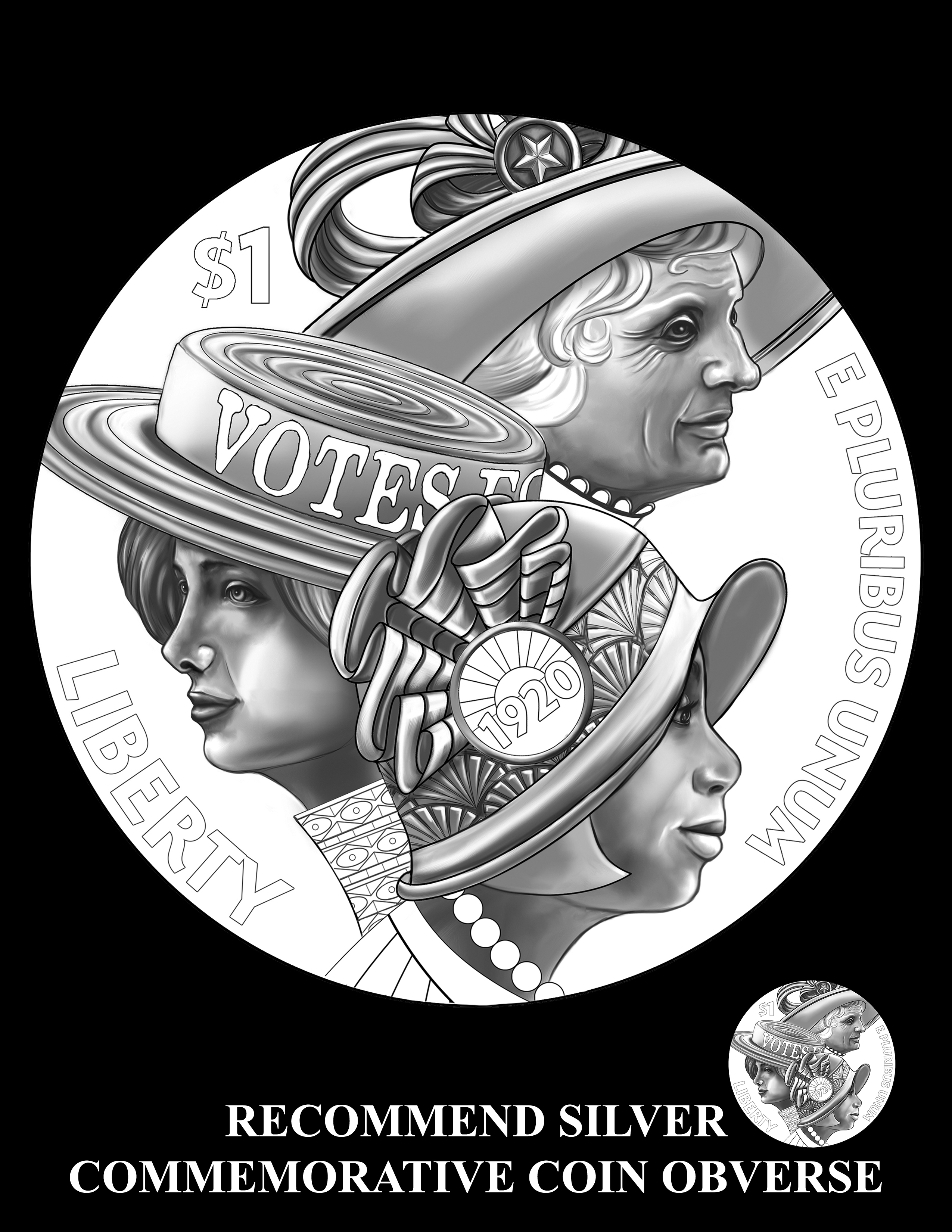 The United States Mint (Mint) officially announces the design for the 2020 Women’s Suffrage Centennial Silver Dollar, celebrating the milestone 100th anniversary of the ratification of the 19th Amendment.  Line art of both designs is available here.  This distinctive silver dollar coin marks a signature achievement in our Nation’s history.

“This coin pays homage to the 19th Amendment’s adoption, and also honors the many pioneers, activists, and foot soldiers in the movement who fought bravely and tenaciously for decades to make the amendment a reality,” said United States Mint Director David J. Ryder.

The 2020 Women’s Suffrage Centennial Silver Dollar is authorized by Public Law 116-71 to commemorate the ratification of the 19th Amendment to the Constitution of the United States, giving women the right to vote.  Giving millions of female citizens the right to vote profoundly changed our Nation by moving it far closer to its promise of inclusion and equality.  Surcharges of $10 per coin sold are authorized to be paid to the Smithsonian Institution’s American Women’s History Initiative for research and creation of exhibits and programs to highlight the history and impact of women in the United States. The surcharges will also assist in creating exhibitions and programs that recognize diverse perspectives on women’s history and contributions.  The legislation authorizes the Mint to strike and issue up to 400,000 $1 silver coins.

Artistic Infusion Program artist Christina Hess designed both the obverse (heads) and reverse (tails) of the coin, which were both sculpted by United States Mint Medallic Artist Phebe Hemphill.  The obverse of the coin features overlapping profiles of three distinct women.  Each woman is wearing a different type of hat to symbolize the many decades the suffrage movement spanned.  The figure in the foreground is wearing a cloche hat with an art deco pattern and a button with the year of the 19th Amendment’s ratification.  The inscriptions “LIBERTY,” “$1,” and “E PLURIBUS UNUM” encircle the design.

The reverse design shows “2020” being dropped into a ballot box, styled with art deco elements to indicate the artistic style of the era.  “VOTES FOR WOMEN” is inscribed inside a circle on the front of the box.  The inscriptions “UNITED STATES OF AMERICA” and “IN GOD WE TRUST” are on the ballot box.

“The Smithsonian is honored to join the U.S. Mint in recognizing and celebrating American women's history with the unveiling of this commemorative coin," said Julissa Marenco, Assistant Secretary of the Smithsonian and a Commissioner on the Women's Suffrage Centennial Commission.  "In one of America’s most defining moments, this historic centennial offers an unparalleled opportunity to empower women—past, present and future.”