This Brightly Colored Bird Is One of the Most Endangered Bird Species on the Planet
May 1, 2020
News Release 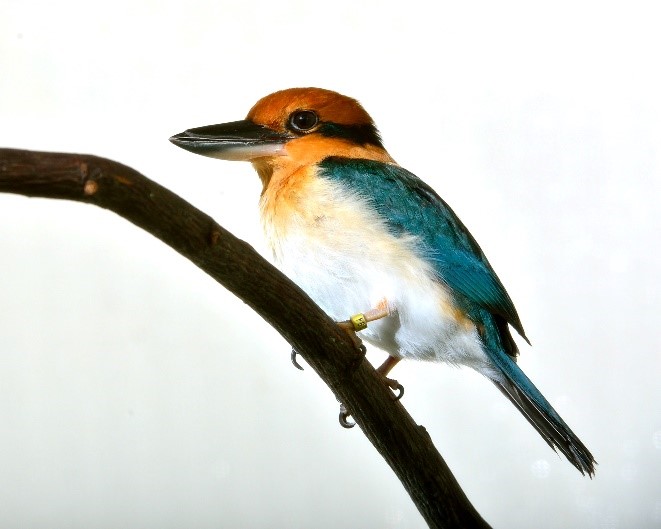 Bird keepers at the Smithsonian Conservation Biology Institute (SCBI) are celebrating the arrival of two Guam kingfisher chicks that hatched April 21 and 23. They are the first offspring for 11-month-old father Animu (ah-KNEE-moo) and 2-year-old mother Giha (GEE-ha). To assist the new parents, keepers are allowing them to raise the older chick while animal care staff hand-rear the younger. With only approximately 135 Guam kingfishers remaining in the entire world, every chick is precious. These two healthy, thriving chicks bring the total number of kingfishers under SCBI’s care to eight.

All existing Guam kingfishers, or sihek (SEE-heck) as they are called in Chamorro (the language of the indigenous people of the Mariana Islands), are descended from 29 individuals. They were taken from the wild into human care in the 1980s to create a breeding program to save the species from extinction. SCBI hatched its first chick in 1985. Since then, 22 chicks have hatched at SCBI as part of the Association of Zoos and Aquariums’ Guam Kingfisher Species Survival Plan.

In February 2020, Animu and Giha laid their first clutch of two eggs. Although the eggs were not fertile, keepers gave the pair “dummy eggs”—real eggshells that have been emptied and refilled with plaster—and allowed them to incubate the eggs for the full term, or 21 days. This demonstrated to keepers that Animu and Giha could properly care for eggs and, therefore, any subsequent chicks.

Giha laid a second clutch of eggs March 30 and April 1, and keepers were thrilled to find that both were fertile. Because neither bird has had experience raising chicks, it would be very difficult for them to raise two all on their own. The bird team elected to leave one egg in Animu and Giha’s nest that they could raise and placed the second egg in an incubator with the intention of hand-raising the chick once it hatched.

Guam kingfisher eggs typically hatch between 21 and 23 days after they are laid. The nest and incubator eggs hatched after 22 days. When the nest egg hatched April 21, Giha and Animu appeared to be very attentive to the chick. However, keepers became concerned when they did not observe the first-time parents offering any food. For two days, keepers provided supplemental feeding while allowing the parents to care for their offspring. Two days later, keepers observed Giha entering the nest with insects, a promising indicator that she was feeding the chick.

That same day, April 23, the chick in the incubator hatched. Keepers report that the incubator chick is eating, vocalizing well and appears to be healthy. Keepers will feed the chick every two hours between 6 a.m. and 6 p.m. for the next 10 days. At first, it will only receive thawed mice, which are easier for chicks to digest, but eventually its diet will include crickets, mealworms and small anoles (a type of lizard). After 10 days, the feedings will gradually decrease until the chick is fed twice a day like the adults.

Outside of feeding the chick, keepers will keep interactions with it to a minimum to increase the chances of it successfully raising its own chicks as an adult. They have placed mirrors in the incubator, and they play recorded Guam kingfisher vocalizations to prevent the chick from imprinting on humans.

Guam kingfishers hatch without any feathers, their eyes closed and cannot thermoregulate on their own, so the chicks will stay in the nest or incubator until they have grown feathers. Their plumage will start to come in at around 10 days old, but it will take several more months for the chicks to develop the vibrant blue, orange and white plumage that adults have.

Guam kingfishers are notoriously difficult to breed. They are territorial, and it has been difficult for the Species Survival Plan to match compatible breeding pairs. SCBI bird keepers spend a great deal of time observing the birds and assessing whether they are compatible and ready to be paired for breeding. From their years of observations, they have found that the creation of the nest cavity is an important part of the courtship process. Keepers allow the birds to excavate their own cavities and choose from a few different materials, including logs with mulch-filled cavities, wooden nest boxes packed with mulch and wooden framed boxes with thick sheets of cork.

SCBI plays a leading role in the Smithsonian’s global efforts to save wildlife species from extinction and train future generations of conservationists. SCBI spearheads research programs at its headquarters in Front Royal, Virginia, the Smithsonian’s National Zoo in Washington, D.C., and at field research stations and training sites worldwide. SCBI scientists tackle some of today’s most complex conservation challenges by applying and sharing what they learn about animal behavior and reproduction, ecology, genetics, migration and conservation sustainability.

Photos and video are available to download in the Zoo’s newsroom.