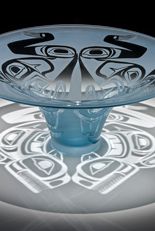 A mid-career survey of internationally acclaimed glass artist Preston Singletary (Tlingit) will open at the Smithsonian’s National Museum of the American Indian in New York, the George Gustav Heye Center Saturday, March 19. Singletary combines traditional Northwest Coast Native culture with the creativity of the studio glass movement and is recognized as one of the leading Native artists today. “Preston Singletary: Echoes, Fire and Shadows” comprises 52 works, including the artist’s largest glass sculpture to date, and will close Monday, Sept. 5.

A highlight of the exhibition is “Clan House,” a 16-by-10-foot cast-glass triptych that references the large-scale Tlingit crest designs that appeared in the interior of traditional longhouses. The two-sided bas-relief works recall carved house posts and frame a monumental center screen.

The exhibition will feature an 8-by-10-foot painting on unstretched canvas and pieces from early in Singletary’s career, as well as many of the artist’s dynamic signature works inspired by Northwest Coast Native traditions, including his interpretation of traditional Tlingit forms such as raven and eagle masks, baskets, bentwood boxes and hats.

“We are delighted to present this rich examination of Singletary’s work,” said John Haworth (Cherokee), director of the Heye Center. “His masterful objects have appeared in different museums around the city over the years, but this will be the first in-depth presentation to a New York audience.”

A discussion with the artist and traditional storyteller and mythologist Walter Porter (Tlingit) will take place Thursday, March 17, at 6 p.m. in the museum’s Diker Pavilion.

This exhibition was organized and originally appeared at the Museum of Glass in Tacoma from July 11, 2009, to Sept. 19, 2010. An illustrated catalog, co-published by the Museum of Glass with the University of Washington Press, is available and includes a DVD documentary on the artist.

“Preston Singletary: Echoes, Fire and Shadows” has been organized by the Museum of Glass and is presented by Alaska Airlines. It is sponsored by the Leonard and Norma Klorfine Foundation, Windgate Charitable Foundation and JoAnn McGrath.

The exhibition is also supported by a grant from the Art Alliance for Contemporary Glass with additional support from Pendleton/American Indian College Fund and Blue Rain Gallery.