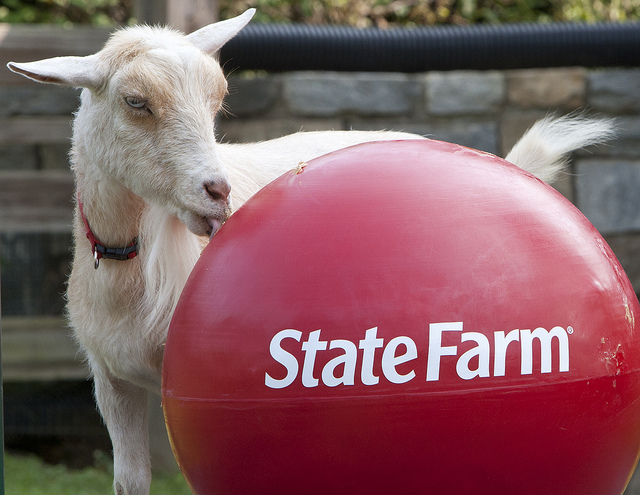 A generous $1.4 million gift from State Farm Insurance to the Smithsonian’s National Zoological Park guarantees that the Kids’ Farm exhibit will remain open for the next five years. The State Farm donation is the largest made to the Zoo since 2007.

Earlier this year the Zoo announced plans to close the Kids’ Farm for budget reasons. The decision was one of several identified to implement cost-saving measures at the Zoo and across the Smithsonian.

The Kids’ Farm opened in 2004 and costs approximately $250,000 to operate each year. When news of the closing became public, there was an overwhelming response from the community and Friends of the National Zoo members who voiced their support for the exhibit to remain open. FONZ members organized fundraising events and launched additional efforts to find the longer term funding.

Today, the Zoo held a ceremony to announce the new sponsor. At the ceremony, Nigerian Dwarf goat Lucy, a long-time Kids’ Farm resident, unveiled the permanent donor sign on the side of the barn. Former Congressman Ralph Regula, who played a vital role in establishing the Kids’ Farm seven years ago, was on hand to offer his congratulations and talk about the importance of farms. In addition, a group of 16 FONZ campers and animal keepers led a parade of donkeys, alpacas, goats, rabbits and a chicken to the Caring Corral where participants met the animals up close.

“At State Farm we are committed to serving the communities where we work and live, which is why we are thrilled to help fund the Kids’ Farm at the Smithsonian’s National Zoo,” said Dan Krause, vice president of State Farm Agency. “As strong supporters of early childhood education, we are pleased to give this gift of support to the Kids’ Farm; a place that inspires learning in our youngsters while providing a magical experience for families to spend time together.”

Families are invited to celebrate at the Kids’ Farm Sunday from 11 a.m. to 2 p.m. Several activities and special programming are planned, including: Fun with Fleece, which allows visitors to create a large felt wall hanging with alpaca fleece and Plant Pots, where children can plant seeds and take home the plant as a souvenir. Young visitors may also decorate various animal ears. Animal demonstrations will include cow washing, fish feeding and hog enrichment, and animal keepers will be on hand to talk to visitors of all ages. Cabot Creamery, Whole Foods Market, Upper Crust Pizzeria, Ben & Jerry’s, Firehook Bakery and Chipotle will provide free gifts.

“We are delighted to partner with State Farm, who came to our aid,” said Bob Lamb, FONZ executive director, “We thank them for making it possible for us to keep open this wonderful exhibit, which is dedicated to bringing visitors into contact with farm animals and appreciating their role in our lives.”

FONZ is committed to raising the additional $100,000 needed to revitalize the Pizza playground.

The Kids’ Farm is home to various farm animals—cows, donkeys, goats, alpacas, hogs, a chicken, koi fish, catfish and rabbits. Several of the animals residing in the farm are rare breeds, including the San Clemente Island goats and Ossabaw Island hogs. The Kids’ Farm provides young children with an interactive learning experience. Designed for children ages 3 to 8, the exhibit provides many urban and suburban children their first experience with animals while learning about where food comes from. Children have the opportunity to groom the animals under the supervision of keepers in the Caring Corral and are able to touch animals in various locations throughout the exhibit. The State Farm gift will cover the salaries for three full-time animal keepers over a seven-day work week, animal feed, bedding materials, medical care and tests, habitat maintenance and general operating supplies.