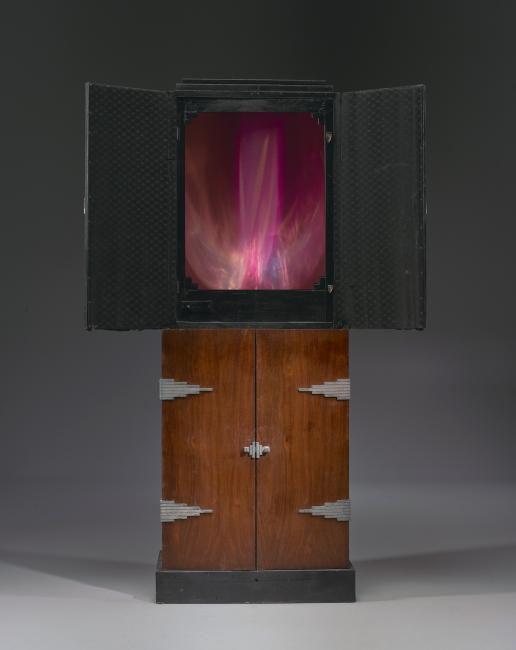 The groundbreaking exhibition “Lumia: Thomas Wilfred and the Art of Light” restores Thomas Wilfred (1889–1968) to his rightful place in the history of modern art. This pioneering artist invented a new art form that was among the first successful fusions of modern art and technology. Wilfred’s work shared formal affinities with the early 20th-century avant-garde, and his contemporaries such as Jackson Pollock, László Moholy-Nagy and Katherine Dreier recognized him as radically innovative. Wilfred was included in the influential 1952 exhibition “15 Americans” at the Museum of Modern Art in New York City alongside Pollock, Mark Rothko and Clyfford Still. His work continued to resonate with later generations of light and media artists, among them James Turrell, who acknowledge Wilfred’s influence on their own thinking about light and art.

“Lumia” features 15 light compositions, shown together for the first time in nearly 50 years. Wilfred’s work, which he referred to collectively as “lumia,” display ever-changing colored forms against a black background, like an aurora borealis emerging from and disappearing into the night sky. Despite his influential career, Wilfred disappeared from the story of American modernism as his works became hard to maintain and consequently relegated to museums’ storage. Extensive research and reassembly by conservators have made it possible to present the works now in their original form.

“Lumia” is on view at the museum’s main building from Oct. 6 through Jan. 7, 2018. The exhibition was organized by Keely Orgeman, the Alice and Allan Kaplan Assistant Curator of American Paintings and Sculpture at the Yale University Art Gallery; Virginia Mecklenburg is coordinating the exhibition in Washington, D.C.

“One of the most rewarding aspects of being a museum director is bringing attention to an overlooked artist like Thomas Wilfred,” said Stephanie Stebich, The Margaret and Terry Stent Director. “During his career from the 1920s through the 1960s, Wilfred revolutionized how artists and the public understood the creative possibilities of light and movement. But in the last half of the 20th century he disappeared almost entirely from public view. The Smithsonian American Art Museum is known for presenting exhibitions that broaden our understanding and definition of visual culture in America. This exhibition introduces our audiences to this early practitioner of light art. We are especially pleased to collaborate with such wonderful partners at the Yale University Art Gallery who have brought Thomas Wilfred’s lumia to life for a new generation.”

“Lumia” presents a long-overdue reevaluation of Wilfred. In the 1920s—well before the advent of consumer television and video technology—the Danish-born American artist forged an international reputation by creating abstractions with moving light. Wilfred designed and built an array of sophisticated mechanical sculptures to produce vibrant, multicolored displays. He aligned his art with then current concepts of the universe—space-time, flux, infinity, the speed of light—sparked by Albert Einstein’s theories of relativity and concepts about optics. He presented his works as both live performances on a cinematic scale and self-contained structures that captivated audiences.

When Wilfred began in 1919 to produce large-scale light projections with the aid of his “Clavilux,” an organlike instrument controlled by several banks of sliding keys, lumia were ephemeral performances that could only be viewed by live audiences in concert halls. The works presented in this exhibition are from subsequent phases of lumia’s development, from at-home instruments made for individual viewers in the 1920s and 1930s to a late work, “Lumia Suite, Op. 158” commissioned by the Museum of Modern Art in 1963. The artworks have various run times, from five minutes, 15 seconds to approximately nine years, 127 days, 18 hours. Five works in the exhibition are on for set, limited periods of time to protect the fragile components.

“This exhibition of Thomas Wilfred’s light sculptures offers the museum a wonderful opportunity to share the work of one of the earliest artists to use light as a medium, complementing our time-based media collection,” said Mecklenburg. “Today lumia remain as transcendent as they were almost a century ago.”

The exhibition includes Wilfred’s best-known project “Lumia Suite, Op. 158” (1963–64), which was kept on almost continuous view for 16 years at the Museum of Modern Art. “Lumia Suite” is organized around three sequential movements of form—vertical, horizontal and elliptical. In the third movement, a descending arc slowly transforms the horizontal sequence into a central whorl of expanding and interlacing ellipses that sweep around a nucleus of intense changes. Viewers witness this central whorl repeatedly, but it almost never reappears in exactly the same colors or shapes. Despite its popularity, its need for maintenance led to its disassembly in 1980.

In addition to the light sculptures, the exhibition presents a selection of drawings and diagrams from the Thomas Wilfred Papers from the collection of Manuscripts and Archives at Yale University’s Sterling Memorial Library. These documents reveal additional aspects of Wilfred’s career, such as the public courses and demonstrations on lumia that he led between 1934 and 1943 at the headquarters of his organization, the Art Institute of Light in New York.

The exhibition was on view at the Yale University Art Gallery in New Haven, Conn., from Feb. 17 through July 23.

The exhibition opens with a conversation among Orgeman and longtime Wilfred collectors Eugene and A.J. Epstein Thursday, Oct. 5, at 6:30 p.m. Gregory Zinman, contributor to the exhibition catalog and assistant professor at the Georgia Institute of Technology’s School of Literature, Media and Communication, will give a gallery talk Saturday, Dec. 2, at 3 p.m. followed by a film screening of “Union” by Stephen Beck, and  “Cycles” by Beck and Jordan Belson at 4:30 p.m. “Conservation in Focus” gallery tours with Dan Finn, the museum’s media conservator, are scheduled for Thursday, Oct. 12, at 4 p.m. and Friday, Dec. 15, at 3 p.m.

The exhibition catalog, distributed by Yale University Press, includes a foreword by James Turrell and essays by Maibritt Borgen, Jason DeBlock, Orgeman, Carol Snow and Zinman that explore lumia’s dialogue with science, technology, abstraction and the moving image. It is available in the museum store ($45).

“Lumia: Thomas Wilfred and the Art of Light” was organized by Keely Orgeman, the Alice and Allan Kaplan Assistant Curator of American Paintings and Sculpture at the Yale University Art Gallery and was made possible by the Terra Foundation for American Art. Additional support provided by Mary-Jo and John Amatruda, Jerald Dillon Fessenden, the David Bermant Foundation, the Art Gallery Exhibition and Publication Fund, and the Friends of American Arts at Yale Exhibition and Publication Funds.

The presentation at the Smithsonian American Art Museum is a collaboration with the United States Patent and Trademark Office. Generous funding for the exhibition was provided by the Elizabeth Broun Curatorial Endowment, the James F. Dicke Family Endowment and the scan | design Foundation.

Note to editors: Selected high-resolution images for publicity only are available through the museum’s Dropbox account. Email AmericanArtPressOffice@si.edu to request the link.