Move Will Prepare Them for Their New Spotlight in “Entertainment Nation” Exhibition, Opening Dec. 9. Last Day To View the Slippers Is June 12.
May 4, 2022
News Release 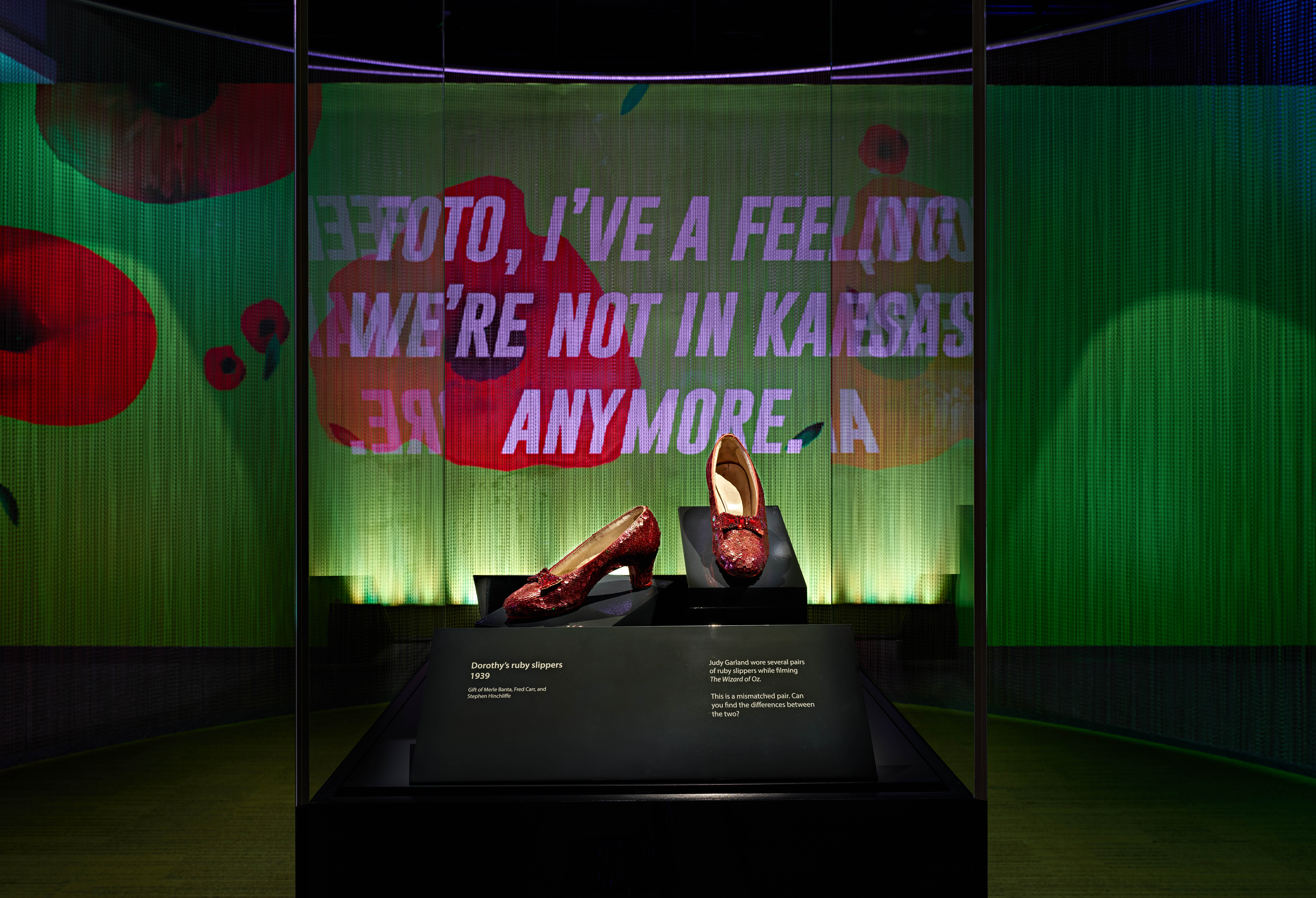 The famous Ruby Slippers Judy Garland wore in the 1939 MGM film, The Wizard of Oz, are getting ready for their newest role and will need to be removed from display June 12 to prepare them for the National Museum of American History’s first dedicated exploration of entertainment history in “Entertainment Nation”/“Nación del espectáculo” opening Dec. 9. Visitors will be able to follow a yellow brick road to the Ruby Slippers, which will be in a special “spotlight” case in the new exhibition. The sequined shoes are one of the most asked-about Smithsonian objects and have been on almost continuous display since they were donated anonymously to the museum in 1979.

The Wizard of Oz is a fantasy tale about Kansas farm-girl Dorothy’s journey to a magical land and was based on the 1900 novel by L. Frank Baum (1856–1919). In the history of Technicolor, the MGM movie ranks as a milestone due to its extensive color sequences set in the Land of Oz. For the film, the magical shoes were changed from the book’s silver slippers to an iridescent red hue.

Designed by Gilbert Adrian, MGM Studios’ chief costume designer, the slippers are commercially manufactured red shoes that were altered by having red netting attached to their tops and heels and then covered with red sequins. As with most movie costumes and props, the Ruby Slippers were made quickly and were only meant to last for the brief duration of the shoot. Now more than 80 years old, the Ruby Slippers had a yearlong research and conservation treatment in 2016–17 as part of a Kickstarter campaign to #KeepThemRuby. Videos, blogs and other material will provide digital access to the Ruby Slippers while they are off view in preparation for the new exhibition. “Entertainment Nation” will immerse visitors in the dramatic arc of the nation’s story as told through the power and influence of theater, television, film, music and sports. Within the Ray and Dagmar Dolby Hall of American Culture, the 7,000-square-foot bilingual, multimedia exhibition will feature iconic objects from the museum’s renowned collection illustrated with graphics, video and compelling stories. American Cruise Lines is the exclusive sponsor of the Ruby Slippers spotlight in “Entertainment Nation.”

Through incomparable collections, rigorous research and dynamic public outreach, the National Museum of American History seeks to empower people to create a more just and compassionate future by examining, preserving and sharing the complexity of our past. The museum, located on Constitution Avenue N.W., between 12th and 14th streets, and is open daily from 10 a.m. to 5:30 p.m. (closed Dec. 25). Admission is free and passes are not required. The doors of the museum are always open online and the virtual museum continues to expand its offerings, including online exhibitions, PK–12 educational materials and programs. The public can follow the museum on social media on Twitter, Instagram and Facebook. For more information, go to https://americanhistory.si.edu. For Smithsonian information, the public may call (202) 633-1000.