Smithsonian’s Archives of American Art Announces “Between Artists: In Conversation with History”

“Between Artists” Is a Six-Episode Special Series of the ARTiculated Podcast
July 21, 2022
News Release 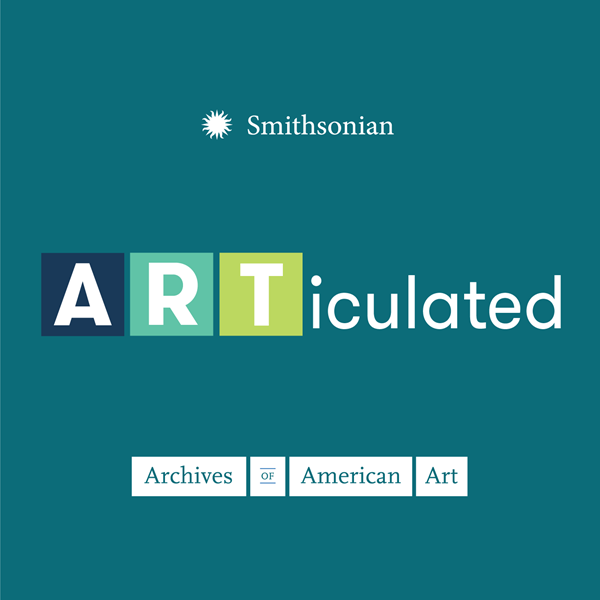 The Archives of American Art has announced “Between Artists: In Conversation with History,” a six-episode series from its podcast ARTiculated: Dispatches from the Archives of American Art. This special series presents significant intergenerational dialogues between artists of the present and voices from the past. Each of the six upcoming episodes will be curated by and feature contemporary artists Nanibah Chacon, Maia Cruz Palileo, Mari Hernandez, Carolyn Lazard, Dionne Lee and Lehuauakea. During their respective episodes, each artist will engage with oral histories from the Archives of American Art’s collection and examine the foundational and invisible influences those interviews have on their own work. The first episode in the series will be released July 28 and is titled “Weaving and Shaping Native Art Today: A Balance Between the Contemporary and the Traditional.” The remaining episodes will be released on the fourth Thursday of each month through Dec. 29.

This series brings together contemporary artists with the history of visual art in the United States, fostering awareness, connection and critical listening across the spectrum of American experience. The episodes uncover new and hidden links between artists well known and not so well known, expanding historical narratives with voices beyond traditional canons.

“We are grateful for this opportunity to invite deep engagement with the big questions at the core of the Archives, from what constitutes influence to who gets a voice in the story of American art,” said Ben Gillespie, the oral historian at the Archives of American Art. “These episodes offer an array of inquiries into the powers of oral history, and we are so grateful to these artists for their research, insight and curiosity in bringing these stories to light.”

The Archives of American Art promotes and provides access to the largest collection of oral histories associated with the visual arts in America, encouraging further study by scholars, students and the culturally curious. The “Between Artists: In Conversation with History” series provides space for new voices to engage deeply with the interviews of artists recorded years ago.

ARTiculated: Dispatches from the Archives of American Art is supported by the Alice L. Walton Foundation. The special six-episode series, “Between Artists: In Conversation with History,” is supported in part by the Smithsonian American Women’s History Initiative.

Nanibah Chacon
Nanibah “Nani” Chacon is a recognized painter and muralist. Her most notable works are in the public arts sector, in which she has a cumulative experience of more than 20 years, spanning graffiti, public murals, community-engaged art and installation. In 2012, she transitioned from studio painting to creating murals and large-scale public works and installations. A return to working on walls and in a public setting was a natural progression—it facilitates the content of her work and her personal philosophy that art should be accessible and a meaningful catalyst for social change. Community-based arts and educational integration are also a key component to the work Chacon creates. Her work has been recognized for its unique style and attention paid to site specificity and the integration of sociopolitical issues affecting humanity, with particular focus on women and Indigenous peoples.

Maia Cruz Palileo
Maia Cruz Palileo is a multi-disciplinary, Brooklyn-based artist. Migration and the permeable concept of home are constant themes in Palileo’s paintings, installations, sculptures and drawings. Influenced by familial oral histories about migrating to the U.S. from the Philippines alongside the troubling colonial history between the two countries, Palileo infuses these narratives using both memory and imagination. When stories and memories are subjected to time and constant retelling, the narratives become questionable, bordering the line between fact and fiction, while remaining cloaked in the convincingly familiar.

Mari Hernandez
Mari Hernandez is a multidisciplinary artist. A career in non-profit arts organizations led her to explore socially engaged and identity-based art, as well as its contributions to human and community development. Simultaneously, Hernandez became concerned with the lack of representation of women of color in her arts community in San Antonio, Texas. These experiences deeply influenced her artistic development.

Inspired by appearance-altering photographers and early Mexican American artists, Hernandez began experimenting with self-portraiture to address questions about identity. As a co-founder of the Chicana art collective Mas Rudas (2009–2015), her self-portraits focused on Chicana aesthetics. Her solo practice is guided by these early influences, but Hernandez continues to expand her repertoire and skill base.

Carolyn Lazard
Carolyn Lazard says they are a “a whatever artists who works in blah blah media on such n [sic] such ideas/thingamajigs [sic]. Their work lalalalas [sic] the whozits [sic]. Lazard went to liberal arts college n [sic] is pedigreed in the following ways from the following institutions. They are currently working on whatever up n [sic] coming nonsense.”

Dionne Lee
Dionne Lee works in photography, collage and video to explore issues of power, survival and personal history in relation to the American landscape.

She received her Master of Fine Arts from California College of the Arts in 2017 and has exhibited at the Museum of Modern Art, New York City; New Orleans Museum of Art; Aperture Foundation, New York City; Silver Eye Center for Photography, Pittsburgh; Et Al., Oakland, California; and the San Francisco Arts Commission, among others. Lee is a 2022 Artist-in-Residence at The Chinati Foundation and Unseen California.

Lehuahuakea
Lehuauakea is a māhū mixed-Native Hawaiian interdisciplinary artist and kapa maker from Pāpaʻikou on Moku O Keawe, the Big Island of Hawaiʻi. Lehua’s Kānaka Maoli family descends from several lineages connected to Maui, Kauaʻi, Kohala and Hāmākua where their family resides to this day.

Through a range of craft-based media, their art serves as a means of exploring cultural and biological ecologies, spectrums of Indigeneity and what it means to live within the context of contemporary environmental degradation. With a particular focus on the labor-intensive making of ʻohe kāpala (carved bamboo printing tools), kapa (bark cloth) and natural pigments, Lehuauakea is able to breathe new life into patterns and traditions practiced for generations. Through these acts of resilience that help forge deeper relationships with ʻāina, this mode of Indigenous storytelling is carried well into the future.

Schedule of “Between Artists” Series’ Episodes

About ARTiculated: Dispatches from the Archives of American Art

Launched in August 2021, ARTiculated, explores the breadth and depth of the Archives’ oral-history collection with context from today’s scholars and artists. Since 1958, the Archives of American Art’s oral-history program has preserved the distinct voices and human memory of the American art world in more than 2,500 interviews. ARTiculated: Dispatches from the Archives of American Art draws on those interviews of the famous and the forgotten, featuring firsthand accounts from artists, dealers, writers and other key figures in dialogue with today’s thought leaders. Articulated is supported by the Alice L. Walton Foundation. Click here to listen to the podcast.

Founded in 1954, the Archives of American Art fosters advanced research through the accumulation and dissemination of primary sources, unequaled in historical depth and breadth, that document more than 200 years of the nation’s artists and art communities. The Archives provides access to these materials through its two research centers, exhibitions and publications, including the Archives of American Art Journal, the longest-running scholarly journal in the field of American art. An international leader in the digitization of archival collections, the Archives also makes nearly 3 million images freely available online. The oral-history collection includes more than 2,500 audio interviews, the largest accumulation of in-depth, first-person accounts of the American art world. Visit the Archives’ website at www.aaa.si.edu.