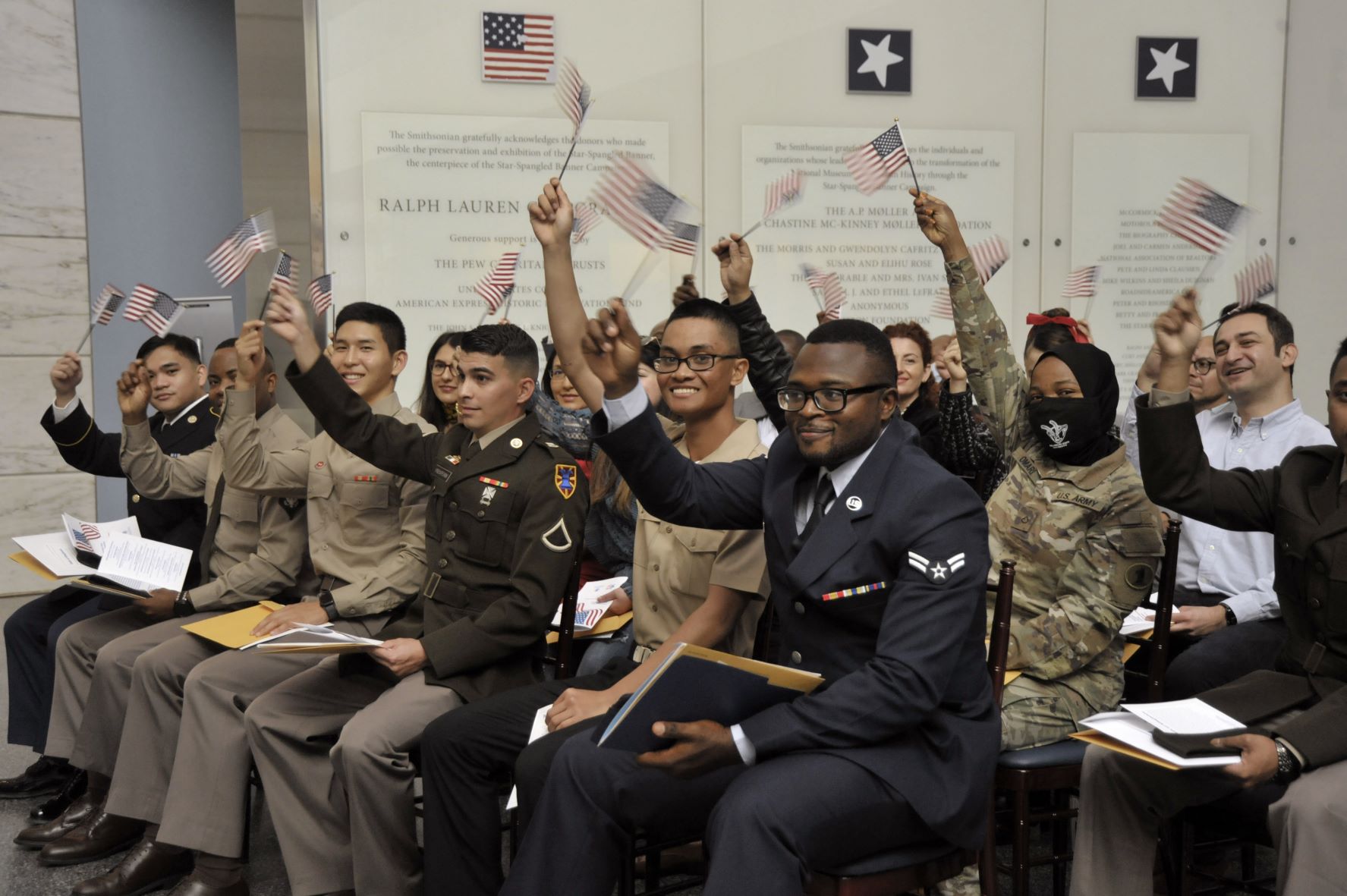 The public event took place Nov. 10 at 11 a.m. in the museum’s Flag Hall, the home of the Star-Spangled Banner gallery that houses the actual flag Francis Scott Key saw over Baltimore’s Fort McHenry in 1814 and was inspired to write the lyrics that became the national anthem.
Anthea M. Hartig, the Elizabeth MacMillan Director at the National Museum of American History, welcomed the citizenship candidates and presided over the presentation of the colors by the Smithsonian Color Guard and the singing of the national anthem by vocalist Arevivia Amos.

“As the director of the nation’s flagship history museum, I am honored to host this gathering recognizing our U.S. veterans and these new citizens,” Hartig said. “This museum was the first Smithsonian museum to host Naturalization Ceremonies and to date we have enjoyed a 20-year partnership with the USCIS to welcome more than 250 new citizens. This museum strives to strengthen democracy by inspiring millions of people through our mission to empower people to create a just and compassionate future by exploring and preserving the complexity of our past.”

The Outstanding Americans By Choice recognition is bestowed upon naturalized citizens who have made significant contributions to their community and their adopted country through civic participation, professional achievement and responsible citizenship. Michael, this year’s recipient, was born in Guyana, South America, and immigrated to the United States in 1979. A graduate of the United States Military Academy at West Point, he was commissioned into the infantry in 1988. His distinguished military career spanned more than 32 years and included deployments to Somalia, Saudi Arabia, Kosovo, Iraq, Ghana, Israel and Afghanistan.

The new citizens will receive a special challenge coin from the museum based on a design from its military history collections as a memento of the ceremony. A challenge coin is a small coin or medallion bearing an organization’s insignia or emblems, and it is generally presented by unit commanders in recognition of special achievement by a member of the unit, or it might be exchanged as part of a social call or official visit to an organization.

Hartig concluded the ceremony by leading all attendees in the Pledge of Allegiance and the retirement of the colors.

Through incomparable collections, rigorous research and dynamic public outreach, the National Museum of American History seeks to empower people to create a more just and compassionate future by examining, preserving and sharing the complexity of our past. The museum, located on Constitution Avenue N.W., between 12th and 14th streets, is open Friday through Tuesday between 10 a.m. and 5:30 p.m. Admission is free, and passes are not required. The doors of the museum are always open online and the virtual museum continues to expand its offerings, including online exhibitions, K–12 educational materials and programs. The public can follow the museum on social media on Twitter, Instagram and Facebook. For more information, visit the museum’s website. For Smithsonian information, the public may call (202) 633-1000.