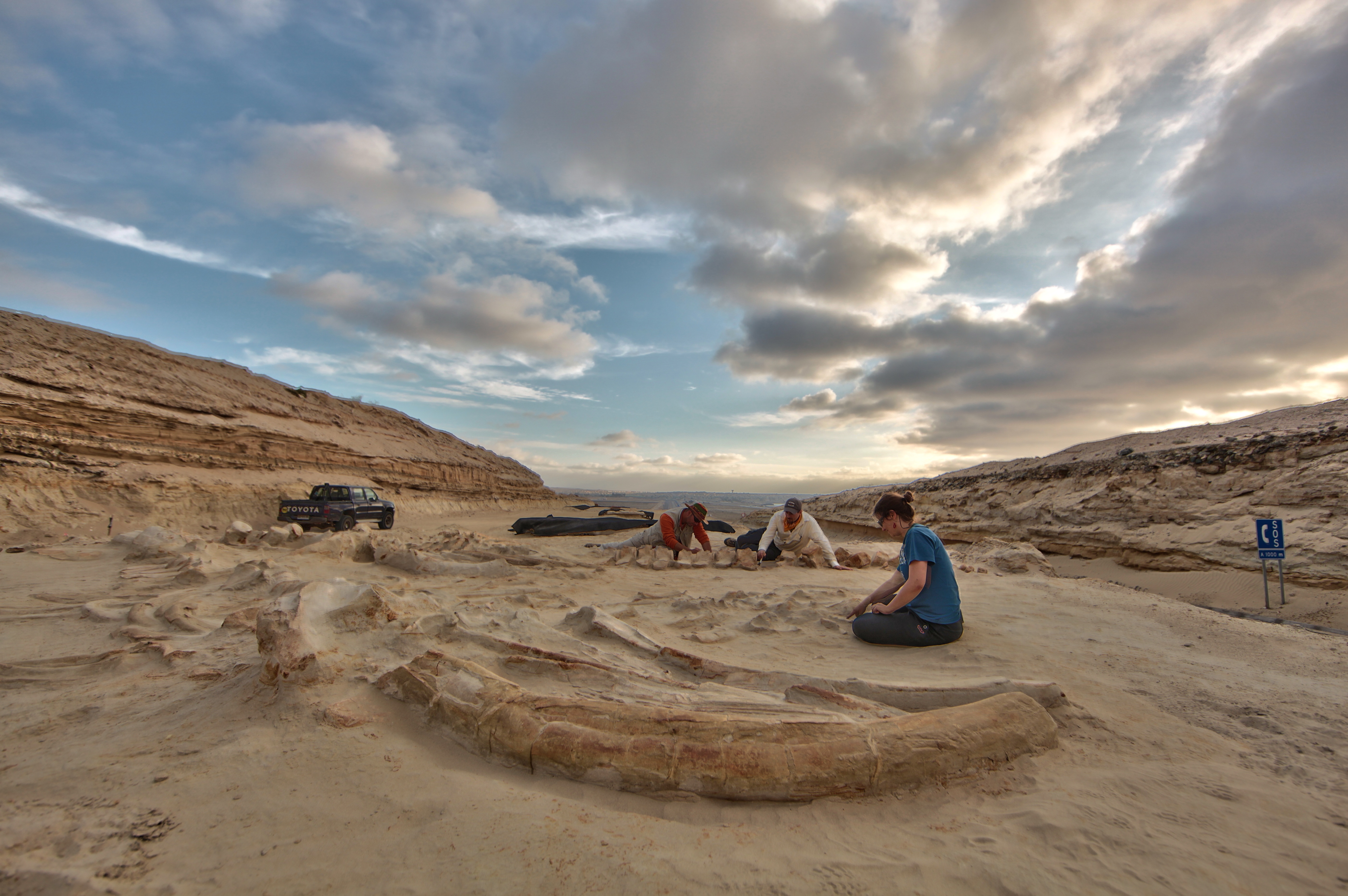 Mass strandings of whales have puzzled people since Aristotle. Modern-day strandings can be investigated and their causes, often human-related, identified. Events that happened millions of years ago, however, are far harder to analyze—frequently leaving their cause a mystery. A team of Smithsonian and Chilean scientists examined a large fossil site of ancient marine mammal skeletons in the Atacama Desert of Northern Chile—the first definitive example of repeated mass strandings of marine mammals in the fossil record. The site reflected four distinct strandings over time, indicating a repeated and similar cause: toxic algae. The team’s findings will be published Feb. 26 in the Proceedings of the Royal Society B.

The site was first discovered during an expansion project of the Pan-American Highway in 2010. The following year, paleontologists from the Smithsonian and Chile examined the fossils, dating 6–9 million years ago, and recorded what remained before the site was paved over.

The team documented the remains of 10 kinds of marine vertebrates from the site, named Cerro Ballena—Spanish for “whale hill.” In addition to the skeletons of the more than 40 large baleen whales that dominated the site, the team documented the remains of a species of sperm whale and a walrus-like whale, both of which are now extinct. They also found skeletons of billfishes, seals and aquatic sloths.

What intrigued the team most, however, was how the skeletons were arranged. The skeletons were preserved in four separate levels, pointing to a repeated and similar underlying cause. The skeletons’ orientation and condition indicated that the animals died at sea, prior to burial on a tidal flat.

Today, toxins from harmful algal blooms, such as red tides, are one of the prevalent causes for repeated mass strandings that include a wide variety of large marine animals.

“There are a few compelling modern examples that provide excellent analogs for the patterns we observed at Cerro Ballena—in particular, one case from the late 1980s when more than a dozen humpback whales washed ashore near Cape Cod, with no signs of trauma, but sickened by mackerel loaded with toxins from red tides,” said Nicholas Pyenson, paleontologist at the Smithsonian’s National Museum of Natural History and lead author of the research. “Harmful algal blooms in the modern world can strike a variety of marine mammals and large predatory fish. The key for us was its repetitive nature at Cerro Ballena: no other plausible explanation in the modern world would be recurring, except for toxic algae, which can recur if the conditions are right.”

Harmful algal blooms are common along the coasts of continents; they are enhanced by vital nutrients, such as iron, released during erosion and carried by rivers flowing into the ocean. Because the Andes of South America are iron-rich, the runoff that has occurred along the west coast of South America for more than 20 million years has long provided the ideal conditions for harmful algal blooms to form.

From their research, the scientists conclude that toxins generated by harmful algal blooms most likely poisoned many ocean-going vertebrates near Cerro Ballena in the late Miocene (5–11 million years ago) through ingestion of contaminated prey or inhalation, causing relatively rapid death at sea. Their carcasses then floated toward the coast, where they were washed into a tidal flat by waves. Once stranded on the tidal flat, the dead or dying animals were protected from marine scavengers, and there were no large-land scavengers in South America at this time. Eventually, the carcasses were buried by sand. Because there are four layers at Cerro Ballena, this pathway from sea to land occurred four different times during a period of 10,000 to 16,000 years in the same area.

“Cerro Ballena is the densest site for individual fossil whales and other extinct marine mammals in entire world, putting it on par with the La Brea Tar Pits or Dinosaur National Monument in the U.S.,” Pyenson said. “The site preserves marine predators that are familiar to modern eyes, like large whales and seals. However, it also preserves extinct and bizarre marine mammals, including walrus-like whales and aquatic sloths. In this way, the site is an amazing and rare snapshot of ancient marine ecosystems along the coast of South America.”

Because the site was soon to be covered by the Pan-American Highway, time was very limited for the researchers. A major solution came in the form of 3-D technology. Pyenson brought a team of Smithsonian 3-D imaging experts to Chile, who spent a week scanning the entire dig site.

Although all the fossils found from 2010 to 2013 have been moved to museums in the Chilean cities of Caldera and Santiago, the Smithsonian has archived the digital data, including the 3-D scans, from the site at cerroballena.si.edu. There, anyone can download or interact with 3-D models of the fossil whale skeletons, scan Google Earth maps of the excavation quarries, look at a vast collection of high-resolution field photos and videos or take 360-degree tours of the site.

The enormous wealth of fossils that the team examined represents only a fraction of the potential at Cerro Ballena, which remains unexcavated. The scientists conservatively estimate that the entire area preserves several hundred fossil marine mammal skeletons, awaiting discovery. Pyenson’s colleagues at the Universidad de Chile in Santiago are actively working to create a research station near the fossils of Cerro Ballena so that those that have been collected and those still covered by sediments can be protected for posterity.