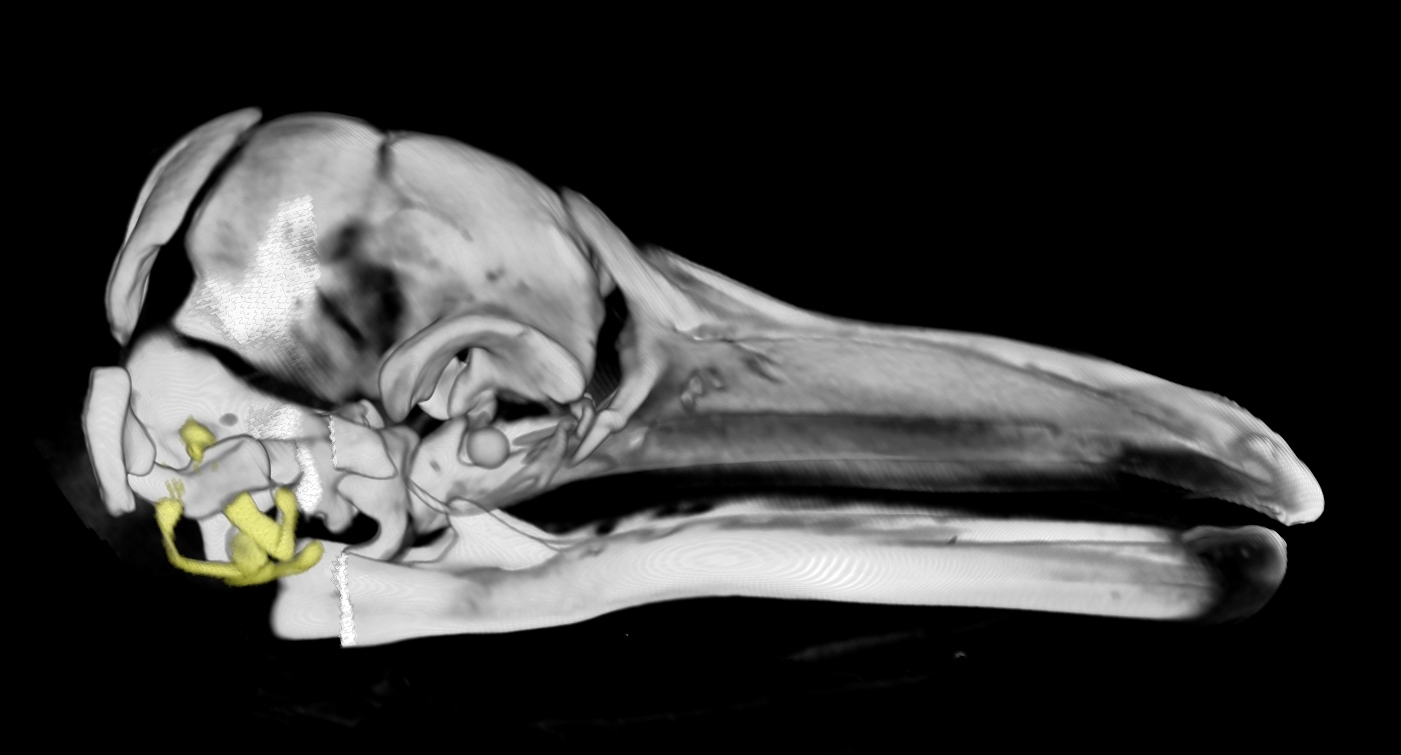 A team of scientists from the Smithsonian’s National Museum of Natural History gained new understanding about the evolutionary history of whale hearing thanks to a rare collection of whales at the museum. The researchers used noninvasive biomedical imaging techniques to trace the development of fetal ear bones in 56 specimens from 10 different families of toothed and baleen whales. They observed how ears develop in unborn whales of modern species, and compared these changes with those reflected in the fossilized ears of extinct whales over the course of millions of years. Their findings confirmed that changes in the development of ear bones in the womb paralleled changes observed throughout whale evolution, providing new insight about how whales successfully made the dramatic evolutionary shift from land to sea and adapted to hearing underwater. More information is available in the March 11 issue of PLOS ONE.

“Whale ears are incredibly complex organs,” said Maya Yamato, a Peter Buck post-doctoral fellow in the museum’s Department of Vertebrate Zoology and lead author of the study. “Although scientists know that hearing is one of the most important senses that whales use to communicate, navigate and search for food in their underwater world, we are still searching for clues about how their ears actually work. This research provides a window into evolutionary processes that took place millions of years ago, and helps explain how whales evolved to hear after they moved from living on land to thriving in today’s oceans.”

Whales rely on sound to communicate with each other and some species, like humpbacks, are known for their majestic underwater songs. Toothed whales also depend on sounds to navigate and forage. They emit calls and echolocation, a kind of sonar, to process the echoes from these noises and detect objects in the water.  Understanding how whales hear is essential to protecting populations in the future as ocean noise from human activities, including global shipping, seismic surveys and sonar training, continues to rise.

Using innovative imaging methods, the team, which included National Museum of Natural History curator of fossil marine mammals Nicholas Pyenson, also became the first group of scientists to identify and depict in situ the development of a specific area of the ear found exclusively in whales. This structure, known as the “acoustic funnel,” is thought to be a critical component to better understanding how baleen and toothed whales hear in their aquatic environments.

Yamato used X-ray computed tomography (CT) to scan images of fetal whales found in the museum’s fluid marine mammal collections. These specimens represent 15 different species of modern whales ranging in size from blue whales to harbor porpoises. They were collected in association with commercial whaling operations in the early to mid-20th century and also consist of samples from fisheries by-catch and strandings.

The CT scans of the fetal whales allowed the research team to gain crucial insight into the early developmental stages of whale ears that are extremely fragile, and nearly impossible to study via traditional research methods. Yamato and Pyenson observed that during the early stages of whale ear development, there are easily recognizable characteristics found in all mammalian ears. As whale ears continue to mature in the womb, these basic mammalian structures rearrange to form the “acoustic funnel,” which may play a critical role in underwater hearing. The position of the acoustic funnel also seems to be significant—some baleen whales have a funnel that faces sideways, while all toothed whales have cones that are oriented towards their snouts. These positions correspond with previously described sound reception pathways in each group. Yamato and Pyenson’s nondestructive approach to exploring whale ears could facilitate additional studies on the same specimens and potentially act as a springboard for learning more about the evolution of other senses in whales.

Hearing underwater comes with challenges. Although the terrestrial ancestors of modern whales had ears with similar structures to humans and other land mammals, modern whales no longer have external ears, known as pinnae. Instead, toothed whales (including dolphins and porpoises) channel sound to their ears using specialized “acoustic fats,” which are found inside their hollow lower jaws and lead to the acoustic funnel of the ears. Baleen whales also have fatty tissues leading to the acoustic funnel, but their hearing mechanisms are less understood.

The team’s research was made possible with the support of museum collections at National Museum of Natural History. The museum’s collection of marine mammals is the largest in the world, consisting of more than 8,900 specimens of cetaceans (whales and dolphins), 3,200 specimens of pinnipeds (seals, sea lions and walruses) and 380 specimens of sirenians (sea cows).