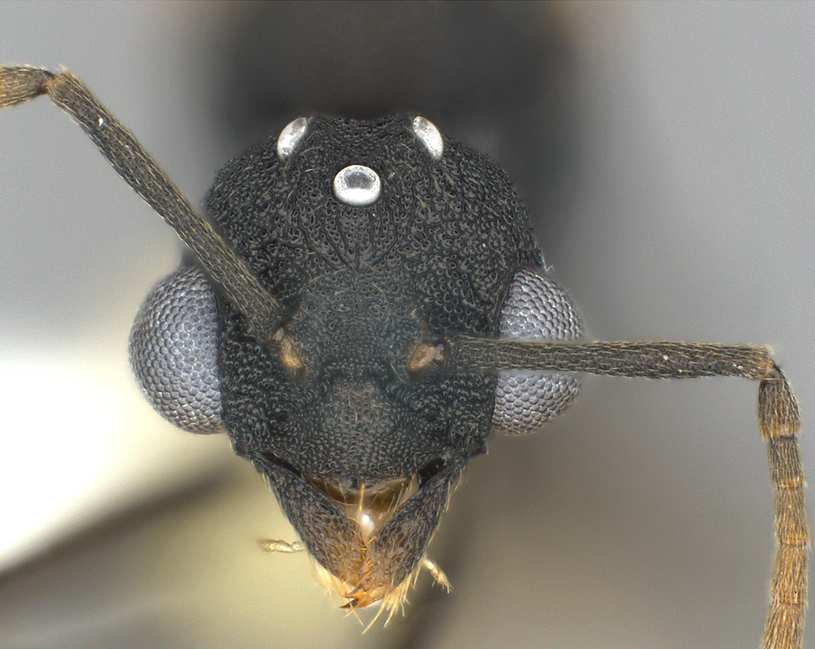 Attine ants make up a group of more than 240 known ant species that pioneered agriculture well before humans and nearly all other organisms in the history of life. They evolved more than 50 million years ago, growing elaborate fungal gardens as a source of food within nests for their colonies. Scientists at the Smithsonian’s National Museum of Natural History discovered a new genus and species of attine ants that reveals key clues in the mystery of ant agriculture evolution. A description of the new species, Cyatta abscondita, was published in the Nov. 15 issue of the journal PLoS ONE.

Ted Schultz, curator of ants at the museum, and Jeffrey Sosa-Calvo, graduate student at the University of Maryland and Smithsonian pre-doctoral fellow, conducted an ancestral analysis of the new species using DNA techniques. This opened a new window through which they can learn more about the most recent common ancestor of all fungus-farming ants. The new species is considered to be a “living fossil,” which can reveal ways in which early attine ants may have lived.

“Through our DNA analysis, we learned that the new species is very closely related to the first ant ancestor that began growing fungal gardens,” said Sosa-Calvo. “Given this relationship, we can infer that some of C. abscondita’s unique physical and behavioral characteristics hint at what the first agricultural ants and their predecessors looked and acted like.”

C. abscondita, meaning “hidden ant” and informally named the “ghost ant” by its discoverers, was first recognized by members of the research team as a single misidentified specimen in 2003 in the collections of the Museum of Zoology at the University of Sao Paulo in Brazil. Based on where the specimens had been collected, Schultz and Sosa-Calvo traced the location of the species to two separate, highly threatened, biomes in Brazil: Caatinga, an underexplored desert-like region populated widely by small thorny vegetation, and Cerrado, a tropical savanna region known among experts as a biodiversity hotspot.

“After discovering such an informative species in Caatinga and Cerrado, we are very excited to return to these regions to learn more about this fascinating group of ants,” said Schultz. “With the majority of the world’s invertebrates still waiting to be identified, the age of discovery is only just beginning. Brazil is a key steward in understanding our planet’s incredible natural history and biodiversity, and it plays a vital role in making findings like this possible.”

The discovery of the new species entailed a multiyear excavation of intricate nests, delving down to a maximum of two meters beneath the surface. These nests were made up of a network of fragile tunnels and chambers that could be less than a millimeter in diameter.

Ghost ants are nocturnal and forage for organic debris to grow their fungus gardens, which hang in curtain-like columns from the ceilings of their hidden underground chambers. The fungi that the ghost ants cultivate are probably not completely dependent upon their ant partners to survive and reproduce; they may be capable of surviving independently. The ants, however, are obligatorily dependent on the fungi for their survival.

While theories about the origin of attine ants’ relationships with fungi remain a topic of debate, scientists generally support the hypothesis that ants first began to interact with fungi by sharing overlapping habitats. Over the course of millions of years, this coincidental overlap between the two species developed into a tentative partnership; a relationship in which the fungi and the ants could both survive and reproduce without closely interacting with each other. Since its origin 50 million years ago, this relationship between fungi and ants has become obligatory in many attine species: neither the fungal species nor the ant species in the relationship can live without the other. This complex process of one organism evolving in concert with another is called coevolution.

Understanding how attine ants developed their agricultural relationship with fungi could be extrapolated to improve human farming activities, including sustainable agriculture efforts and crop disease or pest management.

The publication is the result of an international collaboration amongst research institutions based in the U.S., Brazil and Germany.