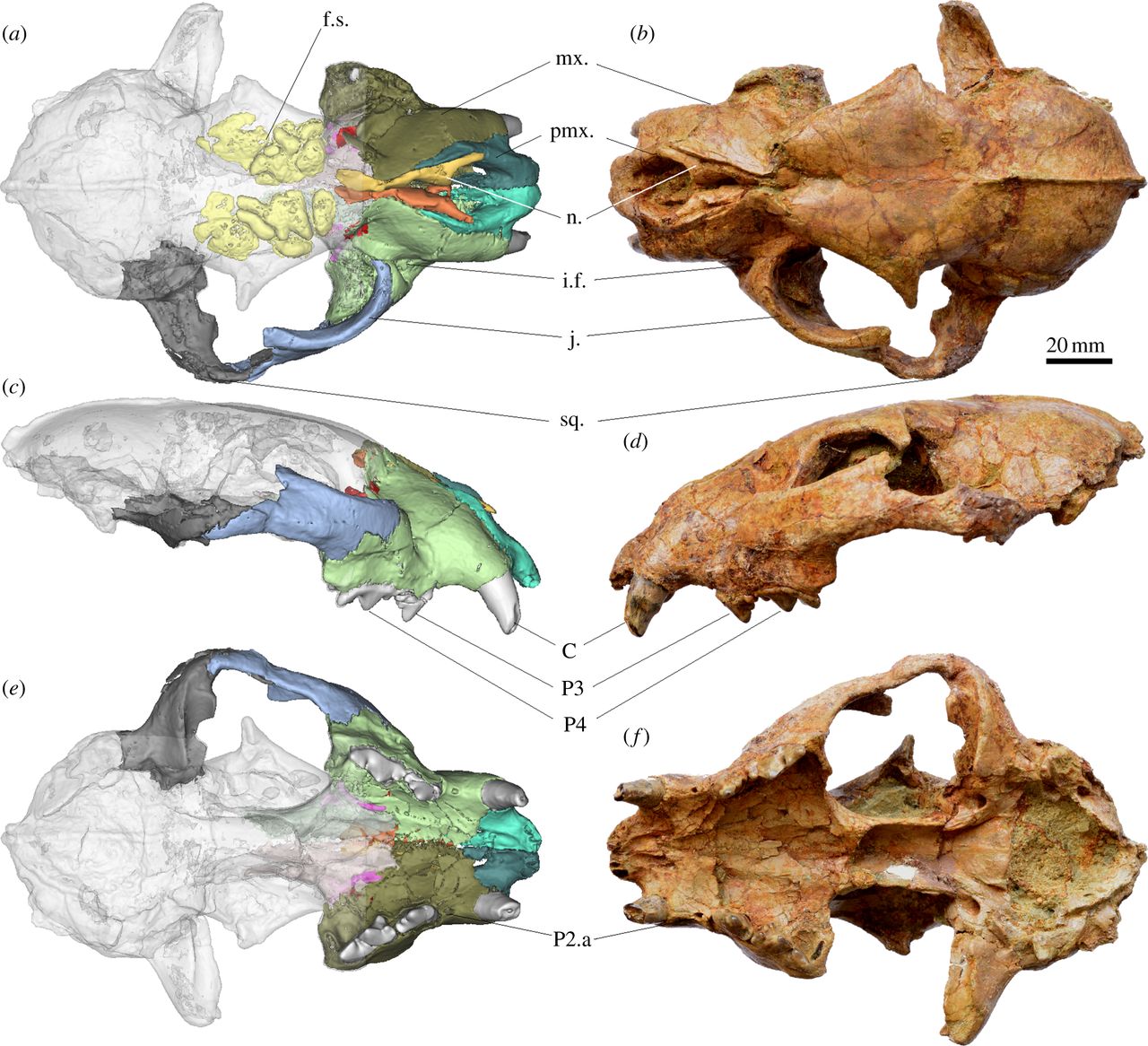 After years of sleuthing for clues about where and when pantherine felids (“big cats”) originated, a Smithsonian scientist and an international team of researchers are one step closer to understanding the evolutionary history of these species. A fossil recently found in the Zanda Basin in Tibet included remains of Pantera blytheae, a new species of big cat that is most closely related to the modern day snow leopard. The skull of P. blytheae is the oldest big cat fossil found to date, and fills a significant gap in the fossil record. It indicates that ancient big cats lived nearly 6 million years ago, 2 million years earlier than previously thought, and sheds light on their geographic origins in Asia. Scientists plan to build on this research by studying how big cats evolved and adapted to changes in their environment over time to help inform modern day big cat conservation efforts. The research is published in the Jan. 7 issue of Proceedings of the Royal Society B: Biological Sciences.

Graham Slater, a Peter Buck post-doctoral fellow at the Smithsonian’s National Museum of Natural History, examined the remains of P. blytheae after its excavation, and helped confirm its status as a new species by conducting morphological and DNA analyses of the skull.

“P. blytheae is a missing link we’ve been searching for in the timeline of big cat evolution,” said Slater. “Scientists are now closer to understanding the evolutionary origin of big cats and are gathering data about their habitat. The hope is that we can apply our knowledge of how P. blytheae adapted to environmental changes millions of years ago to predict the sustainability of snow leopard populations in existence today.”

Ancient cat fossils are rare, making the nearly complete P. blytheae skull an incredibly valuable specimen. Before this discovery, the oldest known fossils of big cats indicated that they first appeared about 3.8 million years ago in Africa. However, DNA comparisons of modern species suggested that big cats evolved at least 6 million years ago in Asia. For the past decade, scientists have been searching for a way to explain these discrepancies. Thanks to the discovery of P. blytheae, researchers now have a critical piece of evolutionary evidence that reconciles the existing fossil and molecular data for big cats and helps tell the story of their evolution.

While the P. blytheae skull is helping scientists better understand when big cats first appeared, the search for even older fossils continues. Phylogenetic evidence suggests that the big cats subfamily, Pantherinae (e.g., lions, tigers, leopards), shared a common ancestor with their evolutionary cousins, Felinae (e.g., cougars, cheetahs, domestic cats), until about 10.8 million years ago when the two lines diverged. The research team plans to search for evidence of this ancestor as well as new big cat species in the Miocene rocks of central Asia, while continuing to add to their collection of P. blytheae specimens.

The scientists also intend to study the skull in the context of its surrounding fossils, a diverse collection of ice age cats and other species such as Tibetan antelope and blue sheep. The dependency that existed between ancient snow leopards and blue sheep millions of years ago is observed in modern populations of both species, demonstrating the importance of prey populations in long-term carnivore survival. By investigating how P. blytheae adapted to changes in prey availability and environmental conditions, scientists can develop conservation strategies to protect modern day big cat species facing similar threats due to habitat degradation and climate change.

Slater worked with a team of scientists from around the world to confirm the new big cat discovery. These researchers include Jack Tseng, a postdoctoral fellow at the American Museum of Natural History who led the excavation team, as well as five other scientists from academic and museum institutions in the United States, Canada and China.