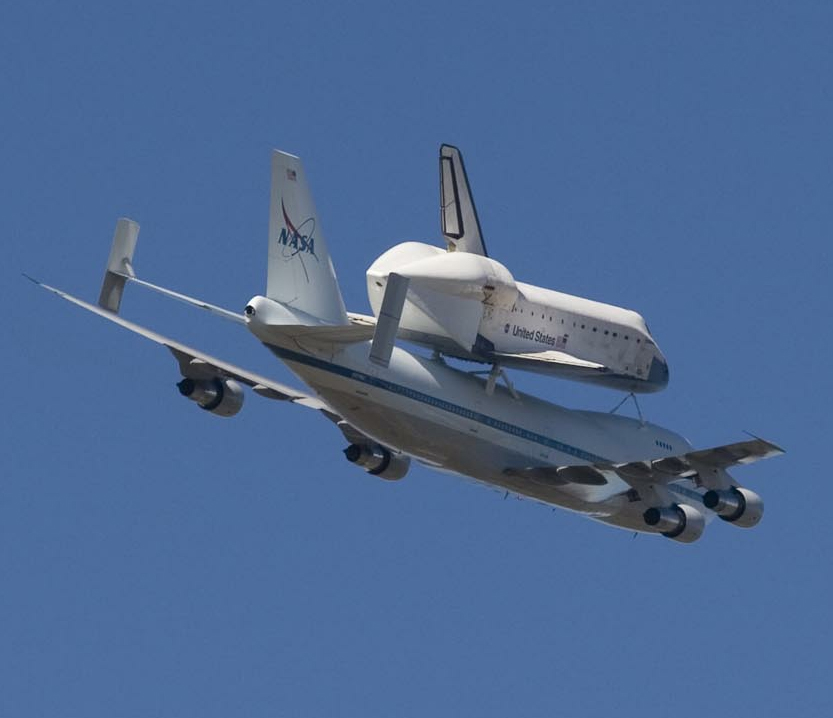 The Space Shuttle Discovery, expected to arrive in the skies over the Washington area Tuesday, April 17, will be a sight people do not see every day. The Smithsonian’s National Air and Space Museum, which will receive the historic orbiter from NASA in a ceremony April 19, is encouraging people to look skyward to witness the sight. Together with NASA, the museum is promoting a “Spot the Shuttle” campaign.

Discovery, atop a Boeing 747 modified as a Shuttle Carrier, will leave Kennedy Space Center around dawn and will likely arrive in the Washington area between 10 and 11 a.m. According to NASA, the aircraft is expected to fly near several landmarks in the metropolitan area, including the National Mall, Reagan National Airport, National Harbor and the museum’s Udvar-Hazy Center, Discovery’s future home. The exact route and timing of the flight, which is being coordinated in cooperation with the Federal Aviation Administration, will depend on weather and operational constraints.

Some publicly accessible locations where people may be able to “Spot the Shuttle” are listed below.

For a close-up view as the carrier approaches Dulles Airport, the museum suggests shuttle spotters gather at Steven F. Udvar-Hazy Center parking lot. The lot will open at 8 a.m.; there is a $15 parking charge. McDonald’s will be open for breakfast, pastries and coffee; people may also bring their own breakfast.

Individuals who spot the shuttle while driving are encouraged to pay close attention to safety. In cooperation with AAA, the museum is offering Safe Driving Tips for Spotting the Shuttle, which can be found on its website.

For information about Discovery events at the Steven F. Udvar-Hazy Center, including the transfer ceremony and Welcome Discovery, a four-day festival of space-related activities presented by the museum in cooperation with NASA, visit http://discovery.si.edu.

To learn more about Spot the Shuttle, including social media opportunities for sharing photos, videos and impressions, visit http://discovery.si.edu/spottheshuttle.