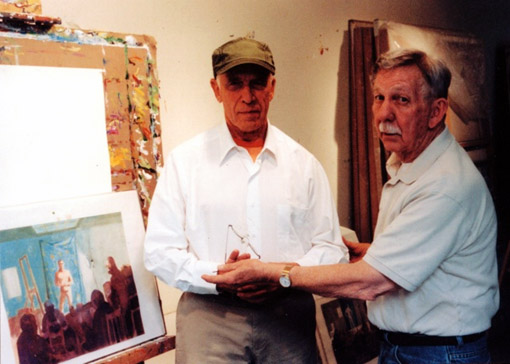 The exhibition “Lost and Found: The Lesbian and Gay Presence in the Archives of American Art” presents, throughletters, photographs, unpublished writings and rare printed material, glimpses into the sometimes private, sometimes “out” lives, careers and communities of gay American artists. This exhibit will be on display from Oct. 29 to Feb. 13, 2011, in the Lawrence A. Fleischman Gallery at the Smithsonian’s Donald W. Reynolds Center for American Art and Portraiture.

Lesbian and gay artists have made a strong imprint on American art for at least two centuries. No matter how they identified themselves—straight, gay, bisexual or queer—many of the artists in this exhibition belonged to creative communities that were unusually welcoming to nonconformist gender roles. Indeed, lesbian and gay visual, literary and performing artists were the first in American history to live openly in same-sex relationships and express their sexuality, well before the modern lesbian and gay civil rights movement. And yet into the late 20th century, many artists did not feel safe to talk and write about same-sex desire except with lovers and other intimates, if at all. The guarded way these artists refer to love and personal relationships is in sharp contrast to a new generation of lesbian and gay artists for whom the imperative to come out of the closet is essential to their creativity and to their politics.

This exhibition, guest curated by artist and art historian Jonathan Weinberg, complements the concurrent exhibition “Hide/Seek: Difference and Desire in American Portraiture” at the National Portrait Gallery. The Archives of American Art is the world’s pre-eminent resource dedicated to collecting and preserving the papers and primary records of the visual arts in America. For more information, visit the Archives website at www.aaa.si.edu.