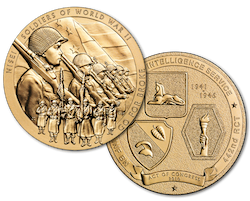 The Smithsonian’s National Museum of American History and the Smithsonian Asian Pacific American Center have joined with the National Veterans Network (NVN) to create an online exhibit centered on the outstanding military service of Nisei soldiers (second-generation Japanese Americans) during World War II, including those who served in combat, in supporting roles and as part of the Japan Occupation. The online exhibition tells the life stories of 12 soldiers and will launch May 12 at cgm.smithsonianapa.org and http://americanhistory.si.edu.

Since 1776, Congress has awarded gold medals as its highest expression of appreciation. More than 65 years after the end of WWII, Congress officially recognized the heroic contributions of three units—the 100th Infantry Battalion, 442nd Regimental Combat Team and members of the Military Intelligence Service (MIS); the bill awarding the Congressional Gold Medal was signed into law by President Barack Obama in 2010.

The object-based digital exhibition will provide an immersive experience for online visitors by bringing to life specific Nisei soldiers’ roles in WWII and postwar engagement. Among the artifacts are letters and the pencil and pen Ted Fujioka, a 442nd soldier, used to write his family in the Heart Mountain concentration camp from Europe; MIS soldier George Hara’s scrapbook detailing his service as a Nisei linguist in the Philippines and Japan Occupation; and photos by Terry Nakanishi, a Women’s Army Corp veteran, showing the contributions Japanese American women made during WWII.

The Nisei Congressional Gold Medal has been on display since February 2014 in the museum’s “Price of Freedom: Americans at War” exhibition, which highlights the courage and the sacrifice millions have made to secure freedom and equality for all Americans. A highlights video about the new website has been added.

“This new digital exhibit will allow the public, students and researchers to explore some of the stories of 33,000 Japanese Americans who served and fought for American ideals during WWII, while many had families who lived behind barbed wire in American concentration camps,” said Jennifer Jones, curator of armed forces history at the museum. “These narratives demonstrate Japanese American patriotism, citizenship, courage, compassion, perseverance and humility and embody the values for which Congress awarded the Nisei Congressional Gold Medal.”

President Franklin D. Roosevelt signed Executive Order 9066 in 1942, ordering the imprisonment of Americans of Japanese ancestry following the Japanese attack on Pearl Harbor. The three-page document changed the course of history for a segment of Americans and challenged their constitutional rights. Almost 120,000 Japanese Americans, two-thirds of them U.S. citizens, were forced out of their homes and into detention camps established by the U.S. government. Many would spend the next three years living under armed guard and behind barbed wire.

“The goal of this digital exhibition is to share the personal experiences of the esteemed Nisei soldiers so generations can understand and personally relate to each story,” said Christine Sato-Yamazaki, executive director at NVN. “The website will allow educators, students and multigenerational families to easily access the extraordinary stories of these WWII heroes.”

The journey of Japanese Americans continued after WWII as they returned from combat or camps to rebuild their lives. Veterans used the GI Bill to enter fields of work and study once closed off to them. Discriminatory laws concerning naturalized citizenship, housing and employment were repealed. The generations who followed petitioned the government for redress and reparations.

The Congressional Gold Medal National Academic and Military Advisory Council, established specifically for this project, and NVN have worked with the museum to verify accurate storylines, identify regional resources, engage with veterans and scholars and review material and research.

“We’re so honored to be collaborating on this important project,” said Jeanny Kim, acting director, Smithsonian Asian Pacific American Center. “This digital exhibition is a much-needed commemoration of the untold stories of Nisei soldiers and their families, and it will be an opportunity for discovery and inquiry for generations to come.”

The National Museum of American History

Through incomparable collections, rigorous research and dynamic public outreach, the National Museum of American History explores the infinite richness and complexity of American history. It helps people understand the past in order to make sense of the present and shape a more humane future. For more information, visit http://americanhistory.si.edu. The museum is located at 14th Street and Constitution Avenue N.W., and is open daily from 10 a.m. to 5:30 p.m. (closed       Dec. 25). Admission is free. For Smithsonian information, the public may call (202) 633-1000.

NVN is a coalition of organizations and individuals dedicated to educating the nation on the Japanese American WWII experience. The network launched the campaign to award the Congressional Gold Medal to the first Asian American recipients in the 100th, 442nd and MIS units, and worked with the U.S. Mint to design the medal. In 2012, they partnered with the National Museum of American History and the Smithsonian Institution Traveling Exhibition Service for a seven-city tour to promote recognition of the Japanese American experience.

The National Park Service preserves unimpaired the natural and cultural resources and values of the National Park System for the enjoyment, education and inspiration of this and future generations. The Park Service cooperates with partners to extend the benefits of natural and cultural resource conservation and outdoor recreation throughout this country and the world.