Smithsonian Libraries Unveils “Once There Were Billions: Vanished Birds of North America” 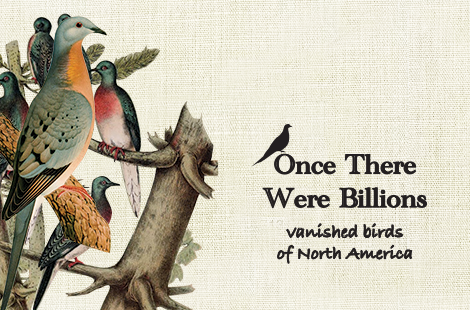 Once an amazing diversity of birds—some in breathtaking abundance—inhabited the vast forests and plains of North America. But starting around 1600, some species began to disappear as humans altered habitats, over-hunted and introduced predators. A notable extinction occurred 100 years ago with the death of Martha the passenger pigeon, the last member of a species that once filled America’s skies. The Smithsonian Libraries’ exhibition “Once There Were Billions: Vanished Birds of North America” tells the story of the last passenger pigeon and the disappearance of the great auk, Carolina parakeet and heath hen that reveal the fragile connections between species and their environment. The exhibition is on view at the National Museum of Natural History June 24 through October 2015.

“Once There Were Billions” features extinct specimens from the National Museum of Natural History’s Division of Birds, such as Martha, the last passenger pigeon, a great auk collected in 1834, a heath hen collected around 1910 and two Carolina parakeets. It will display several books, including The Birds of America: From Drawings Made in the United States and Their Territories by John James Audubon (1840–44), Mrs. Rorer’s Philadelphia Cook Book by Sarah Tyson Heston Rorer (1886) and Mrs. Lincoln’s Boston Cook Book by Mary J. Lincoln (1904); the two cookbooks contain pigeon recipes. Illustrations in the exhibition come from the Biodiversity Heritage Library, a global project that is changing the way research is done by digitizing and freely sharing biodiversity publications with scientists and other users around the world.

A free public lecture and book signing by Joel Greenberg, author of A Feathered River Across the Sky: The Passenger Pigeon’s Flight to Extinction will accompany the exhibition’s opening June 24. Additional programs include a lecture and film screening of From Billions to None by producers Dave Mrazek and Joel Greenberg Sept. 22, a lecture titled “Hope Is the Thing with Feathers: A Personal Chronicle of Vanished Birds” with a book signing by author Christopher Cokinos Oct. 28 and The Lost Bird Project documentary film, lecture and book signing by artist Todd McGrain Nov. 20. All programs begin at 6 p.m. in the Baird Auditorium of the National Museum of Natural History and are free and open to the public. For more information, see the Smithsonian Libraries exhibition webpage.

Co-sponsored by Smithsonian Libraries, Smithsonian Gardens is currently presenting “The Lost Bird Project,” an exhibit by artist Todd McGrain, through March 15, 2015. It features five large-scale bronze sculptures of the Carolina parakeet, the Labrador duck, the great auk, the heath hen and the passenger pigeon. One sculpture, the passenger pigeon, is in the Urban Habitat Garden at the National Museum of Natural History. The four other sculptures are installed in the Enid A. Haupt Garden, a 4.2-acre public rooftop garden between the Smithsonian Castle and Independence Avenue.