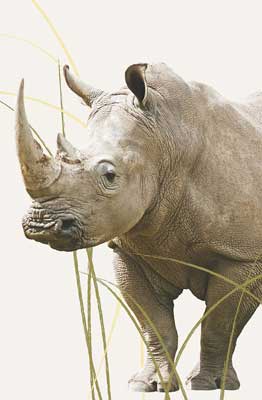 Earth’s biodiversity is under constant threat as loss of habitat leads to the extinction of species. Thousands of species—plants and animals—are disappearing every year, and one of the most endangered is the rhinoceros. The Smithsonian Institution takes part in a global effort dedicated to the survival of endangered species and their habitats, and through its collections and staff, the Smithsonian Libraries participates in this work by supporting and enhancing research in wildlife conservation biology. It has opened the exhibition “Fascinating-Endangered RHINO,” which will be on display from September through April 30, 2013, at the Smithsonian’s National Museum of Natural History.

Rhinoceroses roamed through much of Africa and Asia from time immemorial, but Europeans’ fascination with the animal began with images in books—notably the fantastic (and rather inaccurate) Indian rhino drawn by Albrecht Dürer in 1515. Five species of rhino still exist—Indian, Javan and Sumatran rhinos in Asia, and black and white rhinos in Africa—but all five are in danger of extinction. Rhinos were one of the trophy animals of big-game hunting. Indiscriminate killing through the 19th and 20th centuries nearly wiped them out. Thanks to wildlife sanctuaries and concerted conservation efforts, some species’ populations are rebounding slightly, but poaching and loss of habitat continue to be threats. Books about the rhino now focus on saving the animal.