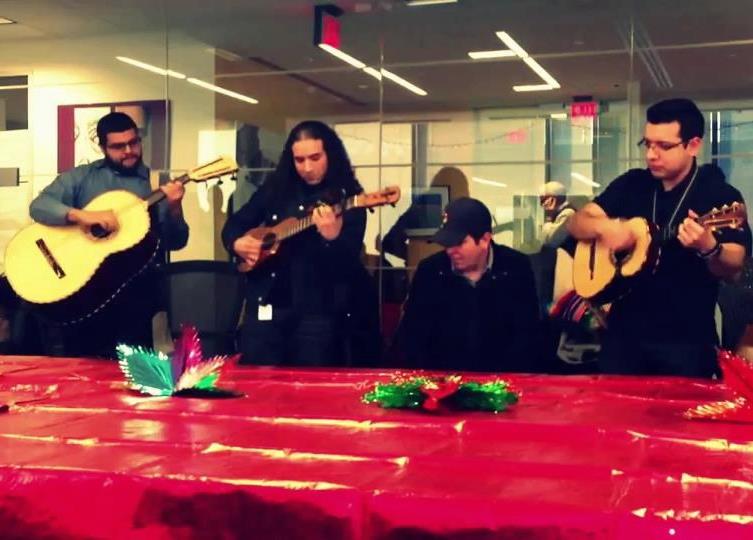 The Smithsonian Latino Center presents musical group Los Gallos Negros, Sunday, May 5, from 2 to 3:30 p.m. in the Warner Bros. Theater at the Smithsonian’s National Museum of American History on Constitution Avenue N.W., between 12th and 14th streets. The concert aims to reinterpret the historical significance of this celebrated holiday with stories of struggle and migration through corridos (narrative songs and poetry forms). These songs honor the hard work and struggle of the immigrant experience in this country, specifically braceros (Mexican guest workers, 1942–1964), and Central Americans. It also traces the historical trajectory of México-U.S. migration.

Los Gallos Negros is a five-member string instrument ensemble with a repertoire of Mexican traditional music. Members hail from throughout the U.S., and all currently work and live in Washington, D.C. They perform regularly around Capitol Hill and have recently played at events supporting the DREAM Act and for Dolores Huerta, an icon of farmworker and international migrant rights in the U.S. Band members include:

The program will include songs and corridos such as “Un mojado sin licencia” (Flaco Jiménez), “Tres veces mojado” (Los Tigres del Norte), “El corrido de Córdova y Canales” (Roberto Martínez, New Mexico) and “Conga del Bracero” (Patricio Hidalgo y el Afrojarocho). The concert will be followed by an onstage conversation between the musicians and the audience. This concert is free and will be webcast live on http://latino.si.edu/newsevents/webcasts.htm. Doors open at 1:30 p.m., and seating is first come, first seated.

The Smithsonian Latino Center is a division of the Smithsonian that ensures Latino contributions to art, science and the humanities are highlighted, understood and advanced through the development and support of public programs, scholarly research, museum collections an educational opportunities at the Smithsonian and its affiliated organizations across the U.S. More information is available at www.latino.si.edu.