Smithsonian Institution, USA Skateboarding and Levitt at the Falls Collaborate To Bring Innoskate Festival to Sioux Falls and Pine Ridge 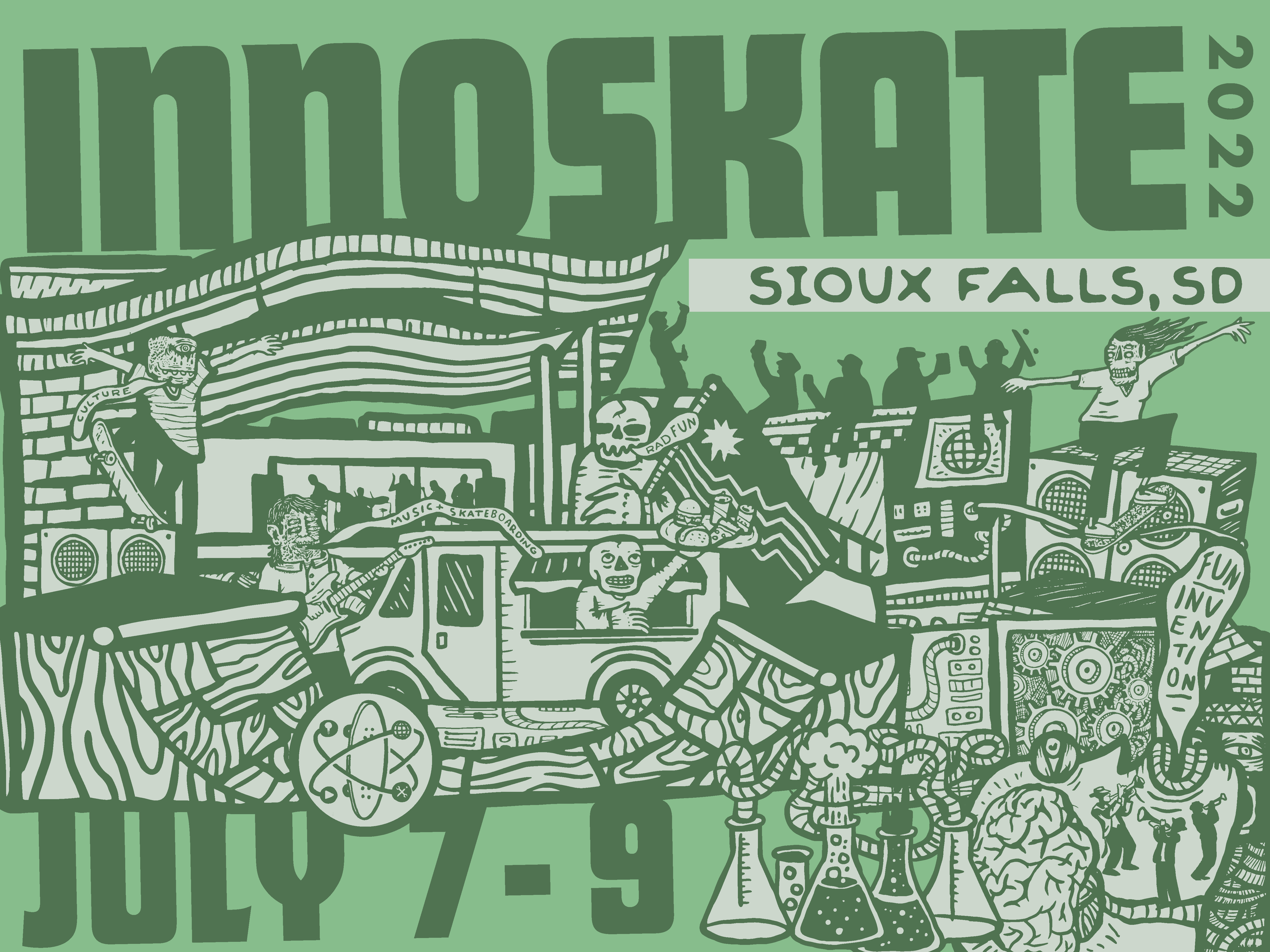 The Smithsonian’s Lemelson Center for the Study of Invention and Innovation, USA Skateboarding and Levitt at the Falls will collaborate to create a one-of-a-kind “Innoskate” festival for the Oglala Lakota Nation in Pine Ridge, South Dakota, July 5, and Sioux Falls, South Dakota, July 7–9. The Innoskate festival brings skateboarding and local communities together in a dynamic exploration of invention, creativity, fun and freedom of expression.

The Levitt Shell, centrally located to downtown Sioux Falls in Falls Park, and the Wounded Knee Four Directions Toby Eagle Bull Memorial Skatepark in Pine Ridge, will provide dynamic backdrops for the 2022 Innoskate festival. Discussions and live concerts featuring the Smithsonian Jazz Masterworks Orchestra ensemble and other national and local artists will examine the deep connections between music, skateboarding, creativity and innovation. In addition, professional and Olympic skateboarders, inventors, scientists, artists and local community leaders will engage audiences through a variety of demonstrations, conversations and hands-on activities that explore the impact of skateboarding innovations in American culture. Leading figures will discuss skateboarding technology, skateboarding in the Native American community at Pine Ridge, issues of diversity and inclusion, skateboarding’s role in promoting physical and mental health, and nurturing the growth of the skate community in Sioux Falls.

“The Innoskate team is excited to inspire young audiences, with a particular emphasis on engaging the youth of Sioux Falls and surrounding communities,” said Jeffrey Brodie, deputy director of the Lemelson Center. “Innoskate motivates young people to be active contributors to their society driven by technological change and to appreciate that invention and innovation happen every day, often in unexpected places.”

“Levitt at the Falls is thrilled to be working with the Smithsonian’s Lemelson Center and USA Skateboarding to bring Innoskate to our community and to our friends in Pine Ridge,” said Nancy Halverson, executive director of Levitt at the Falls. “Music is an integral part of the skateboarding culture, and we look forward to exploring the rich intersection of music and sport.”

“Since our first site visit to Sioux Falls we knew there was an opportunity to do something really special with Levitt at the Falls and the skate community in South Dakota,” said Josh Friedberg, CEO of USA Skateboarding. “Our ongoing collaboration with the Smithsonian’s Lemelson Center is a cornerstone of our Skateboarding for All program and this summer’s Innoskate event is going to be incredible.”

Skateboarding demonstrations, public skating and learn-to-skate clinics will take place throughout the festival. Young people will unleash their creativity through hands-on invention activities, art education programs, music demonstrations and health and fitness activities while learning how to build skate obstacles and skateable art. As always, Innoskate will conclude with a “Best Trick” contest.

The participating institutions and artists will host a series of live programs and demonstrations sharing different perspectives on skateboarding throughout each day. Innoskate Sioux Falls will feature free concerts on the Levitt stage, including performances by the Smithsonian Jazz Masterworks Orchestra, Dessa and Meet Me @ The Altar, as well as a special “A Visual Sound” skate film in a concert presentation. Details on the events and schedule updates will be available on the Levitt at the Falls website.

Established in 2013 as a joint collaboration between USA Skateboarding and the Lemelson Center, Innoskate celebrates skateboarding, invention, creativity and freedom of expression. Key elements of the Innoskate program include large public festivals, hands-on STEAM-based invention activities, public programs and demonstrations, research and documentation of skate history and acquisition of skate objects for the Smithsonian national collections. Innoskate shares its findings and engages broad publics through innovative educational initiatives, publications and digital outlets. Together, these joint activities spark inventive and creative thinking in young people while fostering collaborations between the skate community, scholars, artists, museum professionals, scientists and community leaders.

About the Lemelson Center

The Smithsonian’s Lemelson Center engages, educates and empowers the public to participate in technological, economic and social change. The center undertakes historical research, develops educational initiatives, creates exhibitions and hosts public programming to advance new perspectives on invention and innovation and to foster interactions between the public and inventors. The Lemelson Hall of Invention and Innovation, featuring the Draper Spark!Lab, “Places of Invention” and “Inventive Minds,” is a signature part of the National Museum of American History’s 45,000-square-foot space centered on the theme of innovation. For more information, visit the center’s website. Follow the center on Facebook, Instagram and Twitter.

About Levitt at the Falls

Levitt at the Falls is part of a national network of outdoor Levitt music venues and concert sites dedicated to strengthening the social fabric of communities. Presenting a broad array of music genres and cultural programming, Levitt venues bring together families, friends and neighbors of all ages and backgrounds. With a mission to build community through music, Levitt at the Falls brings high-caliber music programming to the region through a season of 50 free, professional concerts each summer sponsored by Sanford Health in a state-of-the art outdoor music venue located in downtown Sioux Falls, South Dakota.