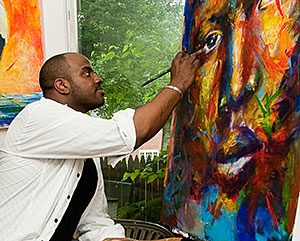 The Festival will be held Wednesday, June 27, through Sunday, July 1, and Wednesday, July 4, through Sunday, July 8, outdoors on the National Mall between Seventh and 14th streets. All events are free. Festival hours are from 11 a.m. to 5:30 p.m. each day with special evening events such as concerts and dance parties beginning at 6 p.m. The Festival is co-sponsored by the National Park Service.

The title of the program alludes to the fact that many African American families living east of the Anacostia River are only a few generations removed from the rural South, particularly North and South Carolina. Many residents continue to maintain close connections with their southern, although often no longer rural, heritage. “Citified” also refers to the ongoing transition from cultural and performance traditions shaped primarily by southern rural agrarian environments to those shaped primarily by wage work in urban industrial environments.

Communities east of the river have a diverse range of arts and cultural activities practiced in formal and informal settings. From singing in local choirs to cooking at home, from mural painting to television production, and from tattooing to storytelling, people creatively express their identities and demonstrate their commitment to their community. These artists foster learning between generations and provide inspiring examples for strengthening social relationships and building healthy communities.

On Saturday, June 7, the Folklife Festival will pay tribute to Chuck Brown, the “Godfather of Go-Go,” with a daylong series of events and activities that honor Brown’s contributions to creativity and community life in Washington, D.C.

The Smithsonian Folklife Festival, inaugurated in 1967, honors tradition bearers from across the United States and around the world. With approximately 1 million visitors each year, the Festival unites performers and visitors in the nation’s capital to celebrate the diversity of cultural traditions. It is produced by the Smithsonian’s Center for Folklife and Cultural Heritage. The Festival’s website is www.festival.si.edu.

About the Anacostia Community Museum

The Anacostia Community Museum opened in southeast Washington in 1967 as the nation’s first federally funded neighborhood museum. Located at 1901 Fort Place S.E. in Washington, D.C., the museum focuses on the impact of contemporary social issues on urban communities. Year-round Metro access and free onsite parking are available. For more information, the public may call (202) 633-4820 or (202) 633-1000 or visit www.anacostia.si.edu.

Note: The museum is closed through July 29 for lighting upgrades.