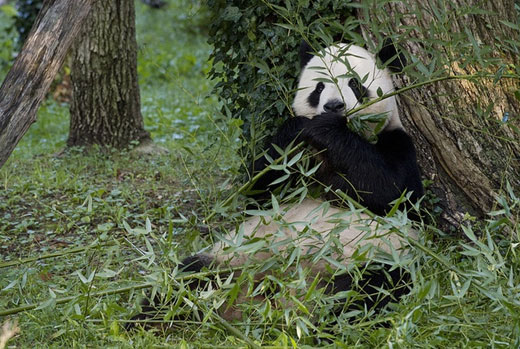 Two new research papers by Smithsonian Conservation Biology Institute scientists and partners will help conservation biologists make strides in saving the fewer than 1,600 giant pandas left in the mountain forests of central China. Over the years SCBI has worked to conserve giant pandas by studying every aspect of their lives—their natural history, reproductive physiology and optimal habitat.

The first paper, set to be published in the Biology of Reproduction’s Papers-in-Press April 4, finds that male pandas, like female pandas, experience reproductive seasonality, but the time frame of reproductive viability differs greatly between the two sexes. Researchers have thoroughly studied female panda reproduction and found that a female panda’s estrus cycle occurs only once a year for only 24 to 72 hours. Until now, no one has extensively studied the male giant panda’s reproductive capacity over time. This study finds that males are reproductively viable for six or more months out of the year, which is significantly longer than females, indicating that the two sexes have evolved very different reproductive strategies.

“The giant panda is perhaps the most high-profile endangered species on Earth, and it is also one of the most well studied,” said Dr. Copper Aitken-Palmer, lead author of the paper and SCBI’s head veterinarian. “As such, it is amazing that we did not previously understand the basic physiological changes occurring in the male giant panda during the breeding season and outside of it. With this information, we now have a complete picture of what is occurring physiologically for both males and females during reproduction.”

For three years, the paper’s authors evaluated the interrelated seasonal changes in male panda testosterone levels, sperm concentration, testes size and reproductive behavior in eight male giant pandas with their colleagues at the Chengdu Base of Giant Panda Breeding in China. They found that unlike females, reproductive fitness in the male giant panda changes over time with sperm production already beginning three to five months before females enter estrus. According to Aitken-Palmer, these results show that male pandas have developed the ability to produce sperm over a long period of time to ensure they have sperm when the brief and unpredictable female panda estrus occurs.

The second study, published in the International Journal of Ecology in March, used two different global climate models to find that more than 16,000 square kilometers of giant panda habitat will likely be lost by 2080 as climate change causes giant panda habitat systems to shift to higher elevations and latitudes. That means that less than half of their already significantly decreased habitat is projected to be suitable in about 70 years. The two models take into account remaining habitat, lost habitat, potential new habitat and current protected areas for giant pandas. The study also finds that habitat fragmentation will likely increase, leading to smaller areas that can support fewer pandas farther away from each other, increasing the risks of inbreeding and population collapse.

“Our research predicts that climate change will substantially decrease the amount of suitable giant panda habitat within the species’ current distribution, but also that we may see new areas becoming suitable for giant pandas,” said Melissa Songer, lead author of the paper and an SCBI wildlife ecologist. “The question remains as to whether giant pandas will have the capacity and opportunity to shift to new areas should they become viable. Our work is an important step in developing climate adaptation strategies and in identifying critical areas that will most likely be suitable and accessible for giant pandas in the face of climate change.”

In addition to calling for the development of more protected areas that are aligned with climate predictions, the paper emphasizes the importance of creating corridors to reduce fragmentation. The study also has land-use implications, as agricultural land and land near human settlements are unsuitable for pandas.

Visitors can visit two giant pandas, Mei Xiang and Tian Tian, at the Smithsonian’s National Zoo. Although the two pandas have bred early in the year for the last few years, so far Mei Xiang has not gone into estrus this year. SCBI scientists, veterinarians and animal care staff continue to monitor both pandas’ behavior and Mei Xiang’s hormones in preparation for breeding season.

In addition to Aitken-Palmer, the authors of the panda reproduction study from SCBI are Caitlin Burrell, Dave Wildt and the late Dr. JoGayle Howard. Partnering authors are Dr. Rong Hou, Zhihe Zhang and Chengdong Wang at the Chengdu Research Base of Giant Panda Breeding; Rebecca Spindler at Toronto Zoo; and Mary Ann Ottinger at the Department of Animal and Avian Sciences at the University of Maryland.

In addition to Songer, the authors of the panda ecology study from SCBI are Melanie Delion and Alex Biggs. The partnering author is Qiongyu Huang in the geography department at the University of Maryland. Friends of the National Zoo helped fund this research.

The Smithsonian Conservation Biology Institute plays a key role in the Smithsonian’s global efforts to understand and conserve species and train future generations of conservationists. Headquartered at a Smithsonian facility in Front Royal, Va., SCBI facilitates and promotes research programs based at Front Royal, the National Zoo in Washington, D.C., and at field research stations and training sites worldwide.