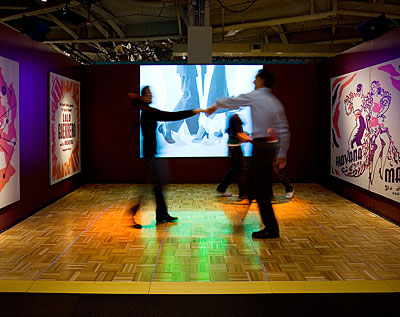 The Smithsonian celebrates Hispanic Heritage Month Sept. 15 through Oct. 15 with a series of performances, lectures, exhibitions, family activities and tours at various museums around the Institution. All programs are free unless otherwise indicated. For a full calendar of events, visit www.smithsonianeducation.org/heritage.

The Smithsonian will present “Hispanic Heritage Month Family Day: The Sounds of American Sabor” Saturday, Sept. 17, from 11:30 a.m. to 5:30 p.m. in the Haupt Garden (behind the Smithsonian Castle) and the S. Dillon Ripley Center. This bilingual family day is presented in conjunction with the exhibition “American Sabor: Latinos in U.S. Popular Music,” currently on view at the Ripley Center. The day will include hands-on activities related to Latino music styles, dance workshops, storytelling and a community art wall. For more information, visit www.latino.si.edu.

The National Museum of American History will present “La Buena Vida.” In these performances, visitors will become part of the live studio audience of the 1940s’ radio broadcasts of Fabiola Cabeza de Baca. In these portrayals, she will share her stories of rural New Mexico while visitors can share stories of their own. The performances will be held four times a day, on Thursdays through Sundays, from Sept. 22 through Oct. 16; a schedule is available at americanhistory.si.edu/events. The performances are part of the History Alive! theater program.

The National Museum of the American Indian’s Dinner and a Movie series will feature Granito: How to Nail a Dictator (103 minutes, 2011), Thursday, Sept. 22. In 1982, filmmaker Pamela Yates released When the Mountains Tremble, the groundbreaking documentary about the Mayan genocide perpetrated by the Guatemalan government of President Efraín Ríos Montt and his supporters. This new documentary recounts how, more than 20 years later, Yates was called to the Spain’s Constitutional Court to testify against Montt about his crimes against humanity. Yates and producer Paco de Onis will speak after the screening. The event is free, but reservations are required and can be made online at www.americanindian.si.edu/calendar. Food can be purchased in the Mitsitam Café. The movie will be screened at 7 p.m. in the Rasmuson Theater.

The National Museum of Natural History will present La Lupe—Queen of Latin Soul (60 minutes, 2007), Saturday, Sept. 24, at 2 p.m. in the museum’s Baird Auditorium; doors to the auditorium will open at 1:30 p.m. In this film, director Ela Troyano tells the story of the legendary New York City musical rebel and innovator Lupe Yoli (“La Lupe”), who began her career in Havana on the eve of the Cuban Revolution. The screening will be followed by a conversation with Troyano and National Museum of American History curator Marvette Pérez. The film is presented in conjunction with the exhibition “American Sabor: Latinos in U.S. Popular Music,” currently on view at the Ripley Center.

Dwight Blocker Bowers and Marvette Pérez, curators from the Smithsonian’s National Museum of American History, will host a conversation with Diosa Costello, a pioneering Latina performer on Broadway and on the New York cabaret scene from the 1930s to the 1950s. “Diosa Costello: A Latina Trailblazer on Broadway” will take place Saturday, Sept. 17, at 4 p.m. in the Smithsonian Castle Commons.

The Smithsonian American Art Museum will host “Encuentros: Artistic Exchange between the U.S. and Latin America,” a two-day symposium that will examine the exchange of artistic ideas and techniques between Latin America and the United States. The symposium will take place Wednesday, Oct. 5, from 1 to 6:15 p.m. and Thursday, Oct. 6, from 10 a.m. to 6 p.m. in the McEvoy Auditorium at the Reynolds Center. A full schedule is available at AmericanArt.si.edu/research/symposia/2011. This is the third of five symposia in the series “American Art in a Global Context.”

The National Air and Space Museum’s Steven F. Udvar-Hazy Center will host “Hispanics in Science and Aerospace Family Day” Friday, Sept. 16, from 10 a.m. to 3 p.m. Young visitors will hear about Latino Americans’ contributions to aviation and space exploration and take part in bilingual story times and hands-on activities. Admission to the museum and Family Day is free; parking is $15.

The National Air and Space Museum on the National Mall will host “Family Day: Innovators in Air and Space” Saturday, Oct. 15, from 10 a.m. to 3 p.m. The day will include hands-on activities and bilingual presentations on Hispanic contributions to air and space technology.

The National Museum of Natural History presents “Against All Odds: Rescue at the Chilean Mine,” in the Hooker Hall of Geology, Gems and Minerals Last fall, the world watched as rescuers in Chile ferried 33 miners to safety after their nearly two months in a collapsed mine. The exhibition tells the story of the complex rescue effort and includes a rescue capsule, new video footage, mementos from the miners and rock samples from the mine. The museum is open every day, except Dec. 25, from 10 a.m. to 5:30 p.m.

“American Sabor: Latinos in U.S. Popular Music” is bilingual exhibition that focuses on five centers of Latino popular music in America since World War II: New York, Los Angeles, Miami, San Antonio and San Francisco. The exhibition includes artifacts, interviews with musicians, interactives and a dance floor where visitors can move to their favorite Latin rhythms. The exhibition is open daily, through Oct. 9, from 10 a.m. to 5:30 p.m. in the International Gallery of the Ripley Center.