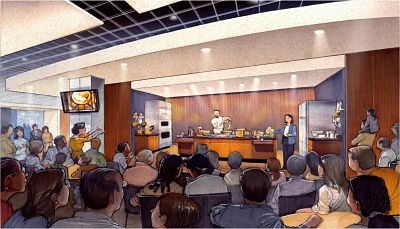 The Smithsonian’s National Museum of American History will unveil a demonstration kitchen July 3 in the Wallace H. Coulter Performance Plaza with the debut of “Food Fridays,” a cooking program in the museum’s Innovation Wing. The first of its kind at the Smithsonian, this working kitchen will connect food programming to the ideas of invention and innovation presented there.

“Food Fridays” is a free 45-minute program that combines cooking demonstrations with conversations between chefs, culinary experts and the public. Each Friday from July to December, at 11 a.m. and 1 p.m., the museum will showcase a guest chef and Smithsonian host Jessica Carbone as they prepare a recipe and discuss the history and traditions behind its ingredients, culinary techniques and other relevant topics. Visitors will have the opportunity on Fridays to purchase a dish inspired by the recipes featured in the demonstrations in the museum’s Stars & Stripes Cafe.

The demonstration kitchen, as part of the museum’s American Food History Project, will be host to live food demonstrations, discussions and cooking programs for visitors of all ages, as well as to ticketed evening events and the Smithsonian Food History Weekend to be held Oct. 22–24.

“The kitchen is a wonderful extension of our food history research, collections, and exhibitions,” said John Gray, museum director. “It will bring visitors of all ages together for a different kind of experience around food history that can expand to discussions about the roles they play in shaping the present and future of food in America.”

All ingredients used in the new kitchen are courtesy of Wegmans Food Markets. The demonstration kitchen is outfitted with new equipment and tools courtesy of Le Creuset, Kitchen Aid, Kitchen IQ, Silpat and Sur La Table. Guest chefs for “Food Fridays” demonstrations will be coordinated through a unique partnership with chefs and food professionals courtesy of Wegmans Food Markets, Sur La Table, L’Academie de Cuisine and Restaurant Associates, as well independent chefs, to create a rotating roster each month with different recipes that follow a changing theme developed by the museum.

During July, “Food Fridays” will look at “Summertime” in America:

“Food Fridays” will explore these monthly themes during the pilot project ending in December: Food Movements in the 20th Century; Hispanic Heritage Month; Harvest Season in America; “The Land of Plenty”: Thanksgiving and Native American Heritage; and Food Celebrations in America. More information is available at http://bit.ly/foodfridays.

The National Museum of American History explores the infinite richness and complexity of American history. For more information, visit http://americanhistory.si.edu. The museum is located on Constitution Avenue, between 12th and 14th streets N.W. Admission is free.