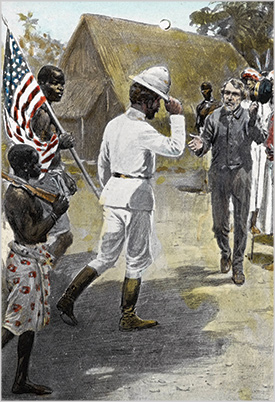 The May issue  of the Smithsonian Associates’ program guide features a variety of educational and cultural programs, including seminars, lectures, studio arts classes, performances for adults and children and local and regional study tours. Highlights this month include:

“Doctor Livingston, I Presume?”: The Life and Times of an Explorer in Africa

Russell Gammon, one of Africa’s leading wilderness guides, narrates the remarkable life story of David Livingston, a man born into the poverty of a Glasgow slum in 1813 who became a renowned explorer eulogized at his funeral in Westminster Abbey as the most important man of his generation.

A Question of Provenance: Holocaust-era Art, Research and Restitution

In a fascinating evening, six art historians will unfold stories of the lives of Jewish collectors, German art dealers and the art-world web that connected them. These experts served on Germany’s international advisory group for the “Schwabinger (Gurlitt) Art Trove” Task Force. A 2012 discovery of an important cache of potentially looted Nazi-era art in the Munich apartment of Cornelius Gurlitt included 1,250 paintings, drawings and prints by artists like Picasso, Chagall and Matisse, and the task force was charged with overseeing research on the horde.

To millions of readers around the world, Scott Turow is the acknowledged master of the legal thriller. It has been 40 years since his debut novel, One L, and 30 since Presumed Innocent, and he marks this milestone with the his newest book, Testimony (Grand Central Publishing). Turow will discuss his career and the process of researching and writing his latest novel in a conversation with John Donvan, broadcast journalist, author and host of the Intelligence Squared U.S. debate program.

Local natural historian Melanie Choukas-Bradley, author of City of Trees: The Complete Field Guide to the Trees of Washington, D.C. (University of Virginia Press), will offer an illustrated overview of many of the city’s notable green spaces and landscaped landmarks, including the White House, Capitol grounds, National Arboretum and the Tidal Basin, as well as area sites such as Mount Vernon. She will discuss the city’s canopy trees and iconic flowering trees and lead a virtual tour of Rock Creek Park.