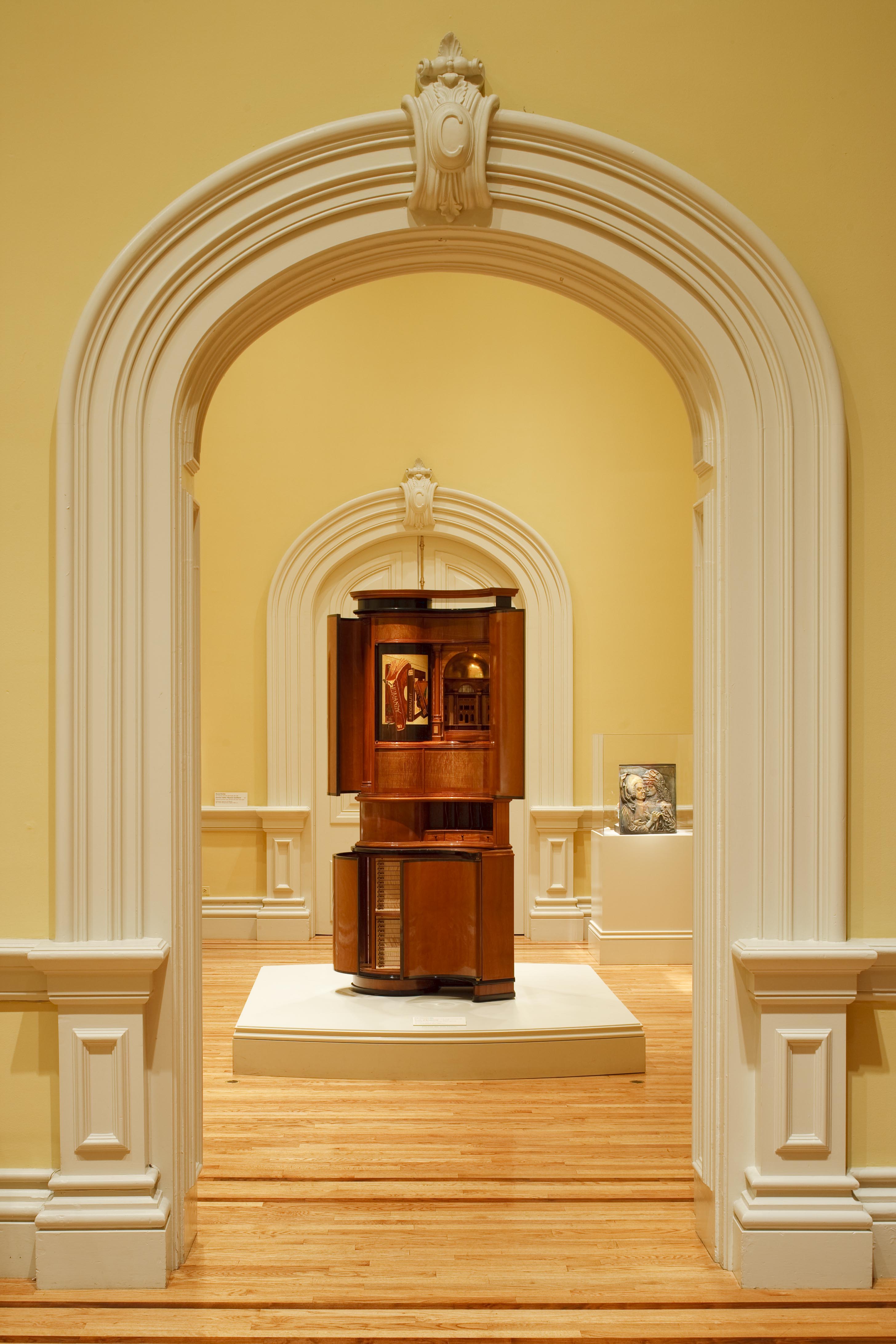 A major renovation of the Renwick Gallery, home of the Smithsonian American Art Museum’s craft and decorative art program since 1972, is in the design phase. This project is the first comprehensive renovation to the building in 40 years.

The Renwick Gallery building will be closed to the public beginning Dec. 9 with plans to reopen in early 2016.

Design is underway for completely renewed infrastructure, enhanced historic features and other upgrades to the National Historic Landmark building that will make it a 21st-century destination attraction. Funding for the renovation is a 50-50 public-private partnership.

“The Renwick Gallery is the capital city’s first purpose-built museum,” said Elizabeth Broun, The Margaret and Terry Stent Director of the Smithsonian American Art Museum. “This elegant historic building was called ‘the American Louvre’ when it first opened, and it symbolized the nation’s aspirations for a great civilization and a place among the great nations of the world. The Smithsonian American Art Museum recognizes the deep historical significance of this noble landmark and premier showcase for American ingenuity and creativity.”

America has always been a nation of “makers,” experimenting with materials and creating innovative designs, both functional and aesthetic. The words “Dedicated to Art” are inscribed above the Renwick Gallery’s front entry. The collection, exhibition program and publications presented by the Renwick Gallery highlight the best craft objects and decorative arts from the 19th century to the present and honor the building’s original purpose.

Westlake Reed Leskosky, based in Cleveland with offices in Washington, D.C., is the lead design architectural firm for this major renovation and enhancement effort. Plans for renovating the 34,000-square-foot masonry structure include replacement of all heating, air conditioning, electrical, plumbing and fire-suppression systems as well as upgrades to security, phone and data communication systems. Wireless access will be installed throughout the building. The original window configuration will be re-created, two vaulted ceilings in the second floor galleries will be restored and the basement will be reconfigured for improved staff offices and workshops.

A key goal is to make the Renwick the first all-LED illuminated museum in the United States, which will dramatically enhance energy efficiency. The new lighting system will reduce energy needs by as much as 70 percent, which combined with other infrastructure improvements, will significantly reduce the building’s environmental footprint.

In June 2013, the Smithsonian American Art Museum selected Applied Minds, an interdisciplinary company based in Los Angeles, as the winner of an international design competition to reimagine the Renwick Gallery’s Grand Salon as a must-see 21st-century destination for contemporary audiences. Applied Minds presented a technology solution that uses state-of-the-art high-definition projectors and audio speakers to create an immersive and interactive environment. The concept proposes unlimited opportunities to transform the space with different looks, as well as providing artists the opportunity to design new digital artworks to fill the space in creative and inspiring ways. Applied Minds is working with the museum to further develop the design concept, explore required support systems and requirements and develop a detailed cost estimate. The museum will decide whether to move forward to implement the design in spring 2014, after the feasibility study concludes. Private funds will be raised to implement the proposed design.

In 2011, the Save America’s Treasures program of the National Park Service awarded a $335,000 grant for the renovation. Two recently endowed curatorial positions—The Fleur and Charles Bresler Curator of American Craft and Decorative Art and the Lloyd Herman Curator of Craft—offer dedicated leadership for the program. The Ryna and Melvin Cohen Family Foundation Endowment supports the “Renwick Craft Invitational” biennial exhibition series, which highlights outstanding craft artists who are deserving of wider national recognition.

The Renwick Gallery attracted 175,000 visitors in fiscal year 2012. A highly praised recent 40th anniversary exhibition called “40 under 40: Craft Futures,” organized by Nicholas R. Bell, The Fleur and Charles Bresler Curator of American Craft and Decorative Art, pointed to new directions in the field of craft. The Smithsonian Channel produced a documentary that looked behind-the-scenes to capture the making of the exhibition.

The Renwick Gallery is one of the most elegant examples of Second Empire architecture in the U.S. The building was designed in 1859 by the distinguished architect James Renwick Jr., who also designed the Smithsonian’s “Castle” and St. Patrick’s Cathedral in New York City. The Renwick Gallery is the third-oldest Smithsonian building. Renwick was inspired by the Louvre’s Tuileries addition in Paris and modeled the gallery in the French Second Empire style that was popular at the time. The Renwick Gallery was built originally as a public museum for William Corcoran’s private art collection.

In 1956, Congress proposed that the building be razed. First Lady Jacqueline Kennedy led the campaign to save the Renwick Gallery as part of her plan to restore Lafayette Square, and in 1965, S. Dillon Ripley, then secretary of the Smithsonian, met with President Lyndon Johnson to request that the gallery be turned over to the Smithsonian. The Renwick was subsequently dedicated “for use as a gallery of art, crafts and design.” The Renwick was added to the National Register of Historic Places in 1969, and in 1971 was designated a National Historic Landmark building in the Lafayette Square Historic District. The Renwick Gallery is located steps from the White House in the heart of historic federal Washington. The Smithsonian American Art Museum and the White House Historical Association have collaborated for many years, most recently organizing and presenting the popular exhibition “‘Something of Splendor’: Decorative Arts from the White House” in 2011.

A more detailed history of the building is available in a separate document.

About Smithsonian American Art Museum and its Renwick Gallery

The Smithsonian American Art Museum celebrates the vision and creativity of Americans with artworks in all media spanning more than three centuries. The museum’s branch for craft and decorative art, the Renwick Gallery, is located on Pennsylvania Avenue at 17th Street N.W. It is open daily from 10 a.m. to 5:30 p.m., except Dec. 25. Admission is free. Metrorail station: Farragut North (Red line) and Farragut West (Blue and Orange lines). Follow the museum on Twitter, Facebook, Flickr, ArtBabble, iTunes and YouTube. Museum information (recorded): (202) 633-7970. Smithsonian information: (202) 633-1000. Website: americanart.si.edu.

Note to editors: Selected high-resolution images of the Renwick Gallery may be downloaded from americanart.si.edu/pr. Email AmericanArtPressOffice@si.edu for the password.