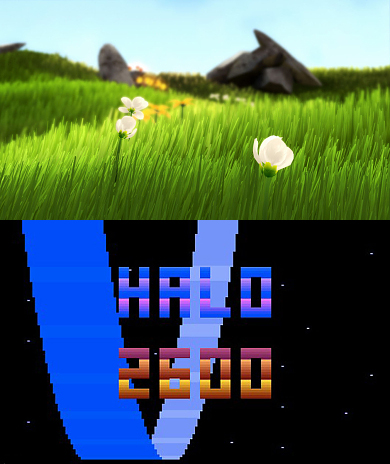 The Smithsonian American Art Museum has acquired two video games for its permanent collection, “Flower” (2009) by Jenova Chen and Kellee Santiago of thatgamecompany and “Halo 2600” (2010) by Ed Fries. These acquisitions build upon the museum’s growing collection of film and media arts and represent an ongoing commitment to the study and preservation of video games as an artistic medium.

“The best video games are a great expression of art and culture in our democracy,” said Elizabeth Broun, The Margaret and Terry Stent Director of the Smithsonian American Art Museum. “I am excited that this new medium is now a permanent part of our collections alongside other forms of video, electronic and code-based art.”

The brief history of video games already includes several generations of both games and gamers. The rapid evolution of technology and the enormous cultural reach of video games have set the stage for a new genre in media art. Video games offer a compelling avant-garde performance space, activated by artists and players alike. These media art practices are distinct from film, video and theater and mark a critical development in the history of art. The museum is acquiring works that explore and articulate the unique boundaries of video games as an art form and plans to acquire additional video games in the future, working with artists, developers and programmers to represent this new creative practice. The inclusion of video games furthers the mission of the museum and ensures the ongoing preservation, study and interpretation of video games as part of the national collection of American art.

“Video games represent a vast, diverse and rapidly evolving new genre that is crucial to our understanding of the American story,” said Michael Mansfield, curator of film and media arts. “‘Flower’ and ‘Halo 2600’ are important additions to our collection, but they are just the beginning of our work in this area. By bringing these games into a public collection, the museum has the opportunity to investigate both the material science of video game components and develop best practices for the digital preservation of the source code for the games themselves.”

In 2012, the Smithsonian American Art Museum organized “The Art of Video Games,” an exhibition that identifies video games as a new mode of creative expression. Following on that research, the museum’s media arts initiative is exploring ways to represent interactive and code-based video games in its permanent collection of film and media artworks. “Flower” and “Halo 2600” are included in “The Art of Video Games” exhibition, which was on view at the museum from

“Flower” represents an important moment in the development of interactivity and art. This innovative game puts the player in an unusual role—the wind—and uses minimal controls to create an emotional, immersive experience of the landscape which changes in response to the player’s actions. Conceived as an ‘interactive poem’ in response to tensions between urban and rural space, Chen and Santiago imagine an unexplored land for the player to discover. “Flower” presents an entirely new kind of physical and virtual choreography unfolding in real time, one that invites participants to weave aural, visual and tactile sensations into an emotional arc rather than a narrative one. While visually beautiful, “Flower” also demonstrates the importance of the interactive component. The work cannot be fully appreciated through still images or video clips; the art happens when the game is played.

“Halo,” a series of popular science fiction games begun in 2001, has become a phenomenon with millions of players worldwide captivated by the multifaceted narrative and sophisticated graphics. In “Halo 2600,” Fries recreated “Halo” for the 1977 Atari VCS (more commonly known as the Atari 2600), distilling the essence of the action game to its elemental parts while also paying homage to the classic elegance of early game design. The resulting experience compresses the complex, contemporary game into just 4K of RAM, creatively reversing the dramatic evolution that video games have experienced during the past four decades. Commonly referred to as a “de-make,” “Halo 2600” deconstructs the gamers’ visual and virtual experience and returns game play to its most basic mechanics. Through “Halo 2600,” Fries illustrates the ever-changing relationship between technology and creativity.

“Introducing these two games to the permanent collection simultaneously is notable,” said Mansfield. “Whereas they may have dramatically different visual approaches—the lush and emotional landscape of ‘Flower’ versus the elemental figures and mechanics of ‘Halo 2600’—these works taken together stake out the rich creative and conceptual potential in video games.”

Video interviews with 20 influential figures in the gaming world, including Fries, Chen and Santiago, are available on the museum’s website and on YouTube at youtube.com/americanartmuseum. The public also may follow the museum for updates about the museum’s media arts initiative and related video game projects on Twitter by following @americanart and using #taovg or by subscribing to the museum’s email list at americanart.si.edu/visit/enews.