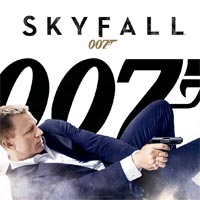 The long-awaited next chapter in the famed James Bond franchise, Skyfall, will open at National Air and Space Museum’s Airbus IMAX Theater at the Steven F. Udvar-Hazy Center in Chantilly, Va., Nov. 8, one day ahead of its nationwide release Nov. 9. Featuring Daniel Craig as writer Ian Fleming’s iconic Agent 007, this will be the first IMAX installment of the venerable James Bond franchise.

The IMAX presentation of Skyfall, will be specially formatted to feature a larger aspect ratio than the conventional release for the entirety of the film. This aspect ratio, which is optimized to take advantage of the IMAX screen, will allow audiences to see more of the image and result in a full panorama of the action—further immersing them into the vast scale and scope of the film.

Craig is back as 007 in Skyfall, the 23rd adventure in the longest-running film franchise of all time. In Skyfall, Bond’s loyalty to M is tested as her past comes back to haunt her. As MI6 comes under attack, 007 must track down and destroy the threat, no matter how personal the cost. The PG-13 rated film runs 143 minutes and is from Albert R. Broccoli’s EON Productions, Metro-Goldwyn-Mayer Studios and Sony Pictures Entertainment. It is directed by Sam Mendes, produced by Michael G. Wilson and Barbara Broccoli, and written by Neal Purvis, Robert Wade and John Logan.

Tickets are now available. Individuals may reserve and purchase tickets up to two weeks in advance. A special midnight screening will take place at 12:07 a.m. Nov. 8. The public may visit any Smithsonian Theaters box office, call (866) 868-7774 or visit www.si.edu/IMAX for information and to purchase tickets. The Airbus IMAX Theater is located on the main floor of the Steven F. Udvar-Hazy Center at 14390 Air and Space Museum Parkway in Chantilly, Va. The theater’s 86-by-63-foot screen is the largest in northern Virginia.