Satisfy Your Curiosity about Mars at the National Air and Space Museum’s “Mars Day!” July 13 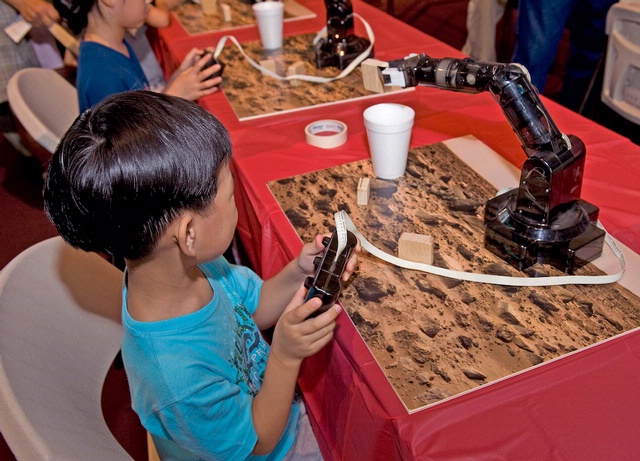 In preparation for the Aug. 6 landing of the Mars Science Laboratory’s Curiosity rover at Mars’ Gale crater, future astronauts, scientists and armchair space travelers are invited to the National Air and Space Museum July 13 for “Mars Day!” to learn all they need to know about the “Red Planet” so they can out-geek their friends and impress their coworkers.

Mars Day! will take place from 10 a.m. to 3 p.m. at the museum’s National Mall building and feature presentations and fun family activities throughout the museum. Presented by the museum’s Center for Earth and Planetary Studies, this annual event enables visitors to interact with staff scientists and experts from the Smithsonian’s National Museum of Natural History and NASA.

Visitors who are curious about Curiosity will have the opportunity to ask Mars Science Laboratory science team member John Grant about the mission’s goals and the new high-tech equipment on the rover, they can tour Mars landing sites with the museum’s Google Earth Station and learn about the rocks and minerals Curiosity may find in Gale Crater with planetary geologist Jim Zimbelman.

Mars Day! is held annually to mark the July 1976 landing of Viking 1, the first spacecraft to operate on Mars. A test version of Viking 1 is displayed in the Milestones of Flight gallery at the museum’s building in Washington. This year’s program is made possible by the support of BAE Systems.

The National Air and Space Museum is on the National Mall in Washington, D.C., at Sixth Street and Independence Avenue S.W. The museum’s Steven F. Udvar-Hazy Center is located in Chantilly, Va., near Washington Dulles International Airport. Both facilities are open daily from 10 a.m. until 5:30 p.m. (closed Dec. 25). Admission is free, but there is a $15 fee for parking at the Udvar-Hazy Center.