Sackler Gallery Presents “Echoes of the Past: The Buddhist Cave Temples of Xiangtangshan,” Opening Feb. 26, 2011 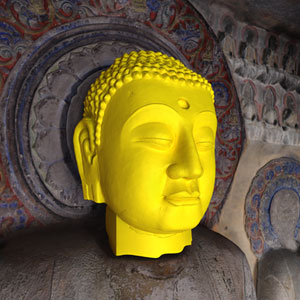 The Smithsonian’s Arthur M. Sackler Gallery and the University of Chicago’s Smart Museum of Art present “Echoes of the Past: The Buddhist Cave Temples of Xiangtangshan,” a major new traveling exhibition that combines majestic sixth-century Chinese Buddhist sculpture and 3-D imaging technology to tell the compelling story of one of the earliest and most important Buddhist pilgrimage sites in China.

Carved into the mountains of northern China, the Buddhist cave temples of Xiangtangshan (響堂山, pronounced “shahng-tahng-shahn”) were the crowning cultural achievement of the sixth-century Northern Qi dynasty (550-577 CE). Once home to a magnificent array of sculptures—monumental Buddhas, divine attendant figures and crouching monsters framed by floral motifs—the limestone caves were severely damaged in the first half of the 20th century when their contents were chiseled away and offered for sale on the international art market.

Because of the extensive damage to Xiangtangshan, it has been all but impossible for recent observers to appreciate the original appearance of the caves or to understand the rich and complex artistic and religious achievement they once represented. In recent years, research and new technologies have made it possible to digitally envision some of the caves as they appeared before their tragic despoliation.

In “Echoes of the Past,” ancient sculptural masterpieces will be united with a set of innovative digital components, including a video installation that offers an immersive, kinetic re-creation of one of the largest stone temples. Touch screens and research kiosks will offer more detailed information about the site and the themes explored in the exhibition.

“This exhibition is the culmination of an imaginative application of digital technology, years of scholarship and an unprecedented collaboration with Chinese art historians and archaeologists,” said Keith Wilson, associate director and curator of ancient Chinese art at the Freer and Sackler galleries. “Museum visitors will have a rare opportunity to experience these beautiful sculptures within their original historical, religious and social contexts. The format offers a new approach to understanding and interpreting damaged cultural sites.”

The exhibition will open at the Smart Museum Sept. 30 and run through Jan. 16, 2011, before traveling to the Sackler Gallery, where it will be on view Feb. 26 through July 31, 2011. The Sackler will offer the largest version of the exhibition, presenting 31 objects, including 13 exceptional Xiangtangshan sculptures from the permanent collection of the Freer Gallery of Art. The Sackler presentation will enable visitors to follow the layout of the caves, exploring the beauty and density of the sculptures, the significance of their placement in groups and the organization of the site and its religious function.

“Echoes of the Past” grew out of a multiyear research and reconstruction project coordinated by the University of Chicago’s Center for the Art of East Asia. An international team of experts photographed and scanned the interior of the caves and more than 80 dispersed sculptures, now located in museums and private collections outside of China. Advanced imaging technology enables researchers to digitally restore the appearance of sculpture groupings within the caves and reconstruct disfigured statues.

Zhang Yesui, ambassador of the People’s Republic of China to the United States, extended his gratitude to the organizing partners and expressed confidence that the exhibition will “further expand mutual understanding and friendship between the people of China and the United States of America.”

The exhibition is curated by Katherine R. Tsiang, associate director of the Center for the Art of East Asia, Department of Art History, University of Chicago, in consultation with J. Keith Wilson, associate director and curator of ancient Chinese art, Freer and Sackler galleries, and Richard A. Born, senior curator, Smart Museum of Art.

“Echoes of the Past” will be accompanied by a full-color, 257-page volume featuring five new essays by leading experts. In addition, two behind-the-scenes essays examine the role of advanced digital technologies in the Xiangtangshan research project and exhibition. The catalog is published by the Smart Museum and distributed by the University of Chicago Press.

“Echoes of the Past” is organized by the Sackler Gallery and the University of Chicago’s Smart Museum of Art.

The Arthur M. Sackler Gallery, located at 1050 Independence Avenue S.W., and the adjacent Freer Gallery of Art, located at 12th Street and Independence Avenue S.W., are on the National Mall in Washington, D.C. Hours are 10 a.m. to 5:30 p.m. every day, except Dec. 25, and admission is free. The galleries are located near the Smithsonian Metrorail station on the Blue and Orange lines. For more information about the Freer and Sackler galleries and their exhibitions, programs and other events, the public is welcome to visit www.asia.si.edu. For general Smithsonian information, the public may call (202) 633-1000 or TTY (202) 633-5285.