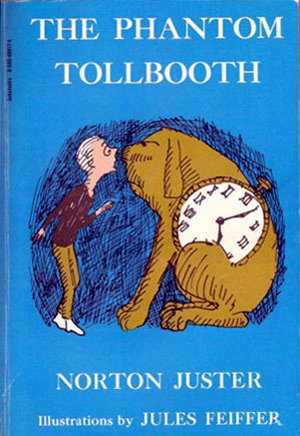 The Smithsonian Associates presents a celebration of the beloved children’s book, The Phantom Tollbooth, Sunday, July 12, at 3 p.m. in Baird Auditorium at the Smithsonian’s National Museum of Natural History. Author Norton Juster and Grammy-winning singer-storyteller Bill Harley, who wrote “Milo’s Tune” inspired by the story, will reflect on the book’s enduring relevance for half a century. The conversation is moderated by Janice L. Kaplan, producer of the new documentary The Phantom Tollbooth: Beyond Expectations, which makes its Washington premiere during the program.

The Phantom Tollbooth brims with wit, warmth and insights into the imagination and the human condition. Whether one read the book as a child or discovered the pun-filled 1961 novel as an adult, it is likely they fell in love with Milo, Tock and the Princesses Rhyme and Reason. The film, The Phantom Tollbooth: Beyond Expectations, explores the longtime friendship between Juster and the book’s illustrator Jules Feiffer—both 82 at the time of filming—and chronicles how the classic tale came together.

Ticket prices for the event are $25 for general admission, $20 for Associate members and $10 for children under 15. For tickets and information, the public may call (202) 633-3030 or visit www.smithsonianassociates.org. Copies of the documentary, The Phantom Tollbooth, and Bill Harley’s Charlie Bumpers vs. the Teacher of the Year and Dirty Joe the Pirate are available to purchase following the program.

The Smithsonian Associates—the largest museum-based education program in the world—produces vibrant educational and cultural programming inspired by the Smithsonian’s research, collections and exhibitions. Each year more than 750 individual programs are presented to spark creativity and excite learning in people of all ages in the Washington, D.C., area and across the country. The Smithsonian Associates, which marks its 50th anniversary in 2015, brings the Smithsonian to life through seminars, performances, lectures, studio arts classes and local and regional study tours, as well as many engaging programs for children, including performances, museum sleepovers and summer day camps.