Three-month Festival To Showcase the Many Manifestations of Culture in Indonesia
August 25, 2016
News Release 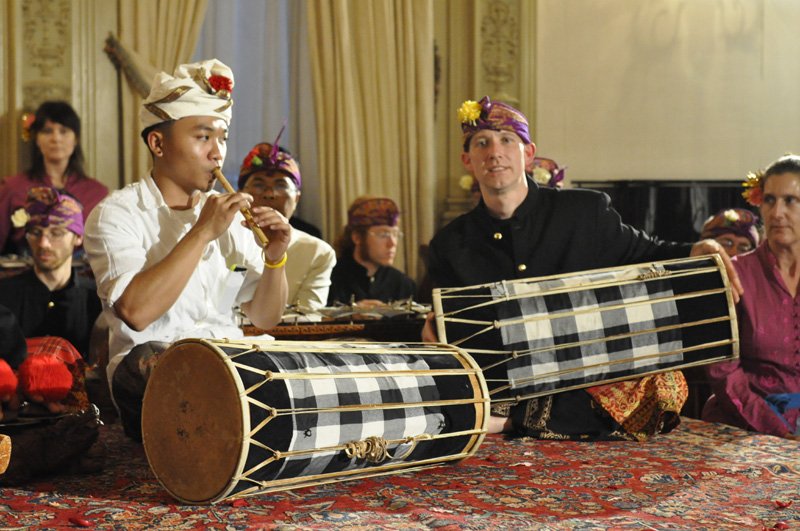 Performing Indonesia, copresented by the Smithsonian’s Freer Gallery of Art and Arthur M. Sackler Gallery, the Embassy of Indonesia and the George Washington University’s Department of Music, features more than 80 musicians, dancers and other performing artists from Indonesia and across the United States. This year’s celebration, taking place at the Corcoran School of the Arts and Design’s Flagg building and George Washington University, runs from Sept. 10 through Nov. 19. The third annual festival spotlights the many manifestations of Islam articulated throughout diverse Indonesian cultural expressions.

This year’s theme, “Islamic Intersections,” is explored through a fashion show of contemporary Muslim designs, a puppet play (wayang) about a mystical journey, concerts of music by Indonesian and American composers, a lecture-demonstration on Qur’anic recitation, a symposium on Islam and the performing arts and concerts of secular music. Indonesia, a Southeast Asian nation made up of thousands of volcanic islands, is home to hundreds of ethnic groups and more Muslims than any other country in the world.

George Washington University’s Corcoran School of the Arts and Design

Visitors can see how fashion for Muslim women has reached new artistic heights in the hands of Indonesian designers. Designs by Meeta Fauzan and Helen Dewi Kirana Darmawan (NES Designs), whose work has graced runways in cities around the world, will be on view. The richly illustrated pre-show lecture features anthropologist Carla Jones of the University of Colorado.

Location to be announced

The tropical sounds of Indonesia’s Harmony ensemble, a traditional xylophone (kolintang) ensemble from the island of Sulawesi will be presented. The concert will also include an orchestral tradition of tuned-bamboo rattles (angklung) from West Java performed by Washington’s own House of Angklung. Complimentary Indonesian savory and sweet snacks and traditional beverages will be available before the concert.

The Art of Reciting the Qur’an

How Qur’anic recitation conveys scripture through virtuosic melodies, delicate vocal ornaments and expert pronunciation of classical Arabic will be discussed. Indonesian reciter Hajjah Maria Ulfah demonstrates the nuances of recitation. Moderating the discussion will be Anne Rasmussen of the College of William and Mary and author of Women, the Recited Qur’an, and Islamic Music in Indonesia.

George Washington University’s Corcoran School of the Arts and Design

Participants will learn the unique movements of this indigenous Sumatran form of martial arts from silat instructor Wona Sumantri of the Silat Martial Arts Academy. Comfortable clothing should be worn for this workshop, which is limited to the first 100 registrants.

Symposium: Islam and the Performing Arts in Indonesia

How music, dance, and theater thrive in the world’s most populous Muslim society will be discussed. This panel of scholars from Indonesia, Japan and the U.S. features Sumarsam (Wesleyan University), Chiara Formichi (Cornell University), Ako Machino (Tokyo University of Arts) and Hajjah Maria Ulfah (Jakarta).

This shadow-puppet play (wayang kulit), titled “Bima Searches for the Divine Essence,” follows a hero of the Mahabharata (the ancient Hindu epic) on his Sufi-inspired journey for knowledge. Mixing philosophical dialogue, slapstick comedy and political commentary, the play is entertainment for all. Directing the program is scholar and puppeteer (dalang) Sumarsam, accompanied by the Javanese Court Gamelan Ensemble of the Embassy of Indonesia, plus guest artists. Before the play, complimentary Indonesian savory and sweet snacks and traditional beverages will be offered.

This workshop will introduce the art of making batik on an Indonesian wooden puppet by applying trace wax and dyes with color just as it is done on clothes.

This performance offers an original perspective on the Five Pillars of Islam through an allegorical tale about a beggar’s perplexing dreams. Composed by Brian Baumbusch, the music features Balinese gamelan, guitar, keyboard and narrator, with libretto by Paul Baumbusch.

The “Performing Indonesia” festival is presented in partnership with the Embassy of Indonesia and George Washington University’s Department of Music. The festival has received support from Rumah Budaya Indonesia and federal support from the Asian Pacific American Initiatives Pool, administered by the Smithsonian Asian Pacific American Center, and additional funding from the American-Indonesian Cultural and Educational Foundation.

The Smithsonian’s Freer Gallery of Art and the adjacent Arthur M. Sackler Gallery, located on the National Mall in Washington, D.C., together comprise the nation’s museum of Asian art. It contains one of the most important collections of Asian art in the world, featuring more than 40,000 objects ranging in time from the Neolithic to the present day, with especially fine groupings of Islamic art, Chinese jades, bronzes and paintings and the art of the ancient Near East. The galleries also contain important masterworks from Japan, ancient Egypt, South and Southeast Asia and Korea, as well as the Freer’s noted collection of works by American artist James McNeill Whistler. The Freer, which will be closed during the exhibition, is scheduled to reopen in 2017 with modernized technology and infrastructure, refreshed gallery spaces and an enhanced Eugene and Agnes E. Meyer Auditorium.