“Not Lost in Translation” Exhibit Focuses on the Star-Spangled Banner 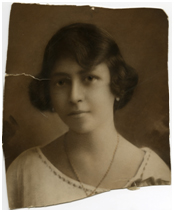 The Smithsonian’s National Museum of American History will open a new biographical exhibition, “Not Lost in Translation: The Life of Clotilde Arias,” Sept. 27 in the Albert Small Documents Gallery. Through the lens of her possessions and papers—photographs, personal and professional documents, journals and objects—the exhibition looks at the life of Arias, the woman who translated the national anthem into its official Spanish version in 1945.

Immigrating to the United States in 1923 from Iquitos, Peru, Arias arrived in New York City at age 22 to study music, but had to abandon her studies to support her family. As a woman and an immigrant, Arias led an extraordinary life and is most known for her composition, “Huiracocha,” which pays tribute to an Incan deity and is in a style of music indigenous to the Andes and Peru.

Growing up in Iquitos, she demonstrated her creativity and ingenuity at an early age, writing poems and composing music. Once in New York City, Arias moved into professions that were not easily accessible to women. In the era of the creative expansion of the Harlem Renaissance, she flourished as a composer, musician, journalist, copywriter, activist and educator, as well as a mother.

“Clotilde Arias lived through the Great Depression, World War II and the development of Madison Avenue, not only as a witness but as a full participant and agent of change,” said Marvette Perez, curator of Latino History at the museum.

Arias became a naturalized U.S. citizen in 1942. Later that decade, she was working on Madison Avenue, using her skills not only to translate ad copy from English into Spanish but writing original copy and composing jingles in Spanish for American products being marketed in Latin America. Segments from these commercial jingles, created by Arias for major American companies, will be part of a featured “soundscape” in the exhibition.

In 1945, the U.S. Department of State commissioned Arias to provide an official translation of the U.S. national anthem that could be sung in Spanish. The anthem’s lyrics were written in 1814 by Francis Scott Key during the War of 1812 when he saw the American flag waving over Fort McHenry at “dawn’s early light.” “The Star-Spangled Banner” had been translated into several languages but Arias’ 1945 version still stands as the only faithful translation of the national anthem able to be performed in Spanish to the tune of the original. This post World War II translation was seen as a way to assimilate immigrants into the United States as well as to share its values and patriotism with Central and South America. One of the museum’s treasured icons is the Star-Spangled Banner—the actual 15-star, 15-stripe flag that inspired Key to pen the words to what became the national anthem.

“More than a century after Francis Scott Key, Arias too believed that people’s aspirations could be promoted and achieved through music,” Perez said. “Her translation is extremely faithful to the original, which is a difficult accomplishment as Spanish requires about twice as many words than English to convey the same message.”

Arias’ original music manuscript for “The Star-Spangled Banner” in Spanish, “El Pendón Estrellado,” is a featured object in the exhibition. The gallery will have bilingual labels and the museum also provides Spanish-language brochures for its “The Star-Spangled Banner: The Flag That Inspired the National Anthem” exhibition. Brochures are available at the visitor desks and online at: http://americanhistory.si.edu/visiting/espanol.cfm.

Coral Cantigas, a chamber chorus specializing in the music of Latin America, will bring to life Arias’ 1945 translation in a program, “The Star-Spangled Banner en español,” which will also feature “Huiracocha,” Sept. 29 at 2 p.m. in the museum’s Flag Hall. The chamber chorus was commissioned by the museum to record the two songs for the exhibition.