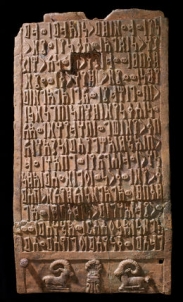 Ancient sources describe the legendary Arabian city of Gehrra as unmatched in wealth and importance. Located in the northeastern part of the Arabian Peninsula, the city attained mythical status in the ancient world, but its exact location was unknown until recently. In 1998, archaeologists discovered the first century A.D. tomb of a young royal girl outside the city of Thaj. Rich with gold, pearls and precious stones, including a Hellenistic gold funerary mask, the find led scholars to propose that Thaj may be none other than the lost city of Gehrra.

The funerary treasures of Thaj are just a few of the surprising discoveries on display in “Roads of Arabia: Archaeology and History of the Kingdom of Saudi Arabia,” opening Nov. 17 at the Arthur M. Sackler Gallery in Washington, D.C. The exhibition, organized by the Sackler in association with the Saudi Commission for Tourism and Antiquities, features objects recently excavated from more than 10 archaeological sites throughout the Arabian Peninsula.

The Sackler’s presentation of “Roads,” on view through Feb. 24, 2013, marks the U.S. debut for this unprecedented assembly, which will then travel to the Houston Museum of Fine Arts, San Francisco’s Asian Art Museum and venues in Chicago and Boston through early 2015. An earlier version of the exhibition, developed by the SCTA in collaboration with the Musée du Louvre, was exhibited in Paris, CaixaForum in Barcelona, the Hermitage in St. Petersburg and the Pergamon Museum in Berlin.

“Roads of Arabia” examines the impact of ancient trade routes that traversed the peninsula, carrying precious frankincense and myrrh to the Mesopotamia and Greco-Roman world and allowing for a vibrant exchange of both objects and ideas. With the later rise of Islam, pilgrimage roads converged on Mecca (Makkah) and gradually replaced the well-traveled incense roads. Julian Raby, the Dame Jillian Sackler Director of the Arthur M. Sackler Gallery and the Freer Gallery of Art, describes the exhibition as “a new window onto a country whose pre-Islamic past is little known to anyone other than a handful of scholars today, and whose Islamic history is often misunderstood.”

From Trade Routes to Pilgrimage Trails

As early as 1200 B.C., the camel revolutionized Arabian commerce. Highly valued incense was transported from the Horn of Africa and the southern shores of Arabian Peninsula to the temples of the royal courts of the Mediterranean and the Near East. Caravans of merchants moved slowly across deserts and craggy mountains, stopping at oases for rest. As a network of roads developed, these oases became cosmopolitan centers of wealth and artistic production, only to be reclaimed by the desert in the subsequent centuries.

Newly rediscovered objects along the trade routes include alabaster bowls and fragile glassware, heavy gold earrings and monumental statues that testify to the lively mercantile and cultural exchange between the Arabs and their neighbors, including the Egyptians, Syrians, Babylonians and the Greco-Romans.

The second part of “Roads of Arabia” focuses on the impact of Islam after the seventh century, especially the development of pilgrimage trails that lead from major cities, such as Damascus, Cairo and Baghdad, to Mecca, the spiritual heart of the new religion. Highlights in this section include some 20 finely inscribed tombstones from the now-destroyed al-Ma’lat cemetery. These humble yet noble stones lend a human face to the multitudes of Muslims who either lived in Mecca or traveled great distances to reach it. A particularly poignant example memorializes a father and daughter who died on their pilgrimage journey together. Mecca itself is represented by a set of gilded doors that once graced the entrance to the Ka‘ba, Islam’s holy sanctuary.

The third section introduces the creation of the kingdom of Saudi Arabia in 1932 and explores the history of archaeology through photographs, travel books, maps and objects.

Arabic Culture on the National Mall and Online

To mark the exhibition’s opening, the Sackler will host a free daylong festival “Eid Al Arabia,” celebrating Arab art, culture and archaeology, Saturday, Nov. 17. The morning will be devoted to a series of talks by leading scholars on the history of archeology in the Arabian Peninsula, followed by expert-led tours. In the afternoon, hands-on activities will introduce families to the most treasured trade good of its time—incense—and to the fine art of Arabic calligraphy, while storytellers and musicians offer different insights into the region’s rich and diverse culture. Customary refreshments of dates, tea and spiced coffee will be offered, along with Middle Eastern cuisine for purchase.

Audiences at home can travel the “Roads of Arabia” online through the exhibition’s website, Roads of Arabia, which introduces object highlights and history through photo slideshows, interactive maps and videos. The site explores Arab culture through podcasts of concerts, performances and lectures and listings of family events and activities. The website will announce future tour dates, locations and programs.

“Roads of Arabia” is organized by the Smithsonian’s Arthur M. Sackler Gallery, in association with the Saudi Commission for Tourism and Antiquities of the Kingdom of Saudi Arabia. ExxonMobil and Saudi Aramco are acknowledged as principal co-sponsors of the tour of “Roads of Arabia” in the U.S. Sponsorship is also provided by The Olayan Group and Fluor Corp. The Boeing Co., Khalid Al-Turki Group, Saudi Basic Industries Corporation SABIC and Saudi Arabian Airlines provided additional support.

The Arthur M. Sackler Gallery, located at 1050 Independence Avenue S.W., and the adjacent Freer Gallery of Art, located at 12th Street and Independence Avenue S.W., are on the National Mall in Washington, D.C. Hours are 10 a.m. to 5:30 p.m. every day, except Dec. 25, and admission is free. The galleries are located near the Smithsonian Metrorail station on the Blue and Orange lines. For more information about the Freer and Sackler galleries and their exhibitions, programs and other public events, including other special programs to celebrate the 25th anniversary of the Sackler Gallery in 2012, visit www.asia.si.edu. For general Smithsonian information, call (202) 633-1000.