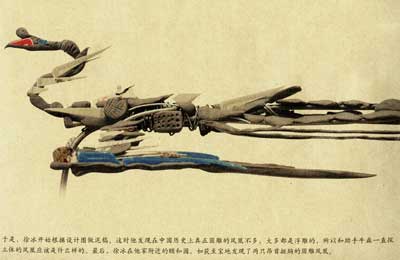 Crafted of debris from construction sites in Beijing, the two 12-ton sculptures span nearly 100 feet in length. First exhibited suspended from cranes in Beijing, they are currently on view at MASSMoca in North Adams, Mass. Due to their technical complexity and challenging subject matter, “Phoenixes” took over two years to create, during which time Xu paid multiple visits to a construction site in Beijing’s Central Business District and spent time with the workers, while conducting research on representations of the mythical phoenix in Chinese art. In the resulting sculptures, steel girders, beams, hard hats and other construction materials are recycled to transform a familiar image into a commentary on the dense urban and social contexts prevalent in contemporary China. The Sackler exhibition, “Nine Deaths, Two Births,” documents the project’s development through preparatory drawings, technical diagrams, scale models and a new film made especially for this presentation. An accompanying selection of masterpieces from the Freer and Sackler collections further illuminates Xu’s approach to reinterpreting a traditional Chinese artistic form.

“Through these rough materials, we gain a sense of Xu’s process and the unpredictability inherent in a project of this scale,” said Carol Huh, assistant curator of contemporary Asian art. “Also as the seminal Word Play exhibition did in 2001, his work offers a unique opportunity to draw on the Galleries’ historical collections to enhance our understanding of the work of a major contemporary artist.”

“Nine Deaths, Two Births” takes its title from Xu’s description of the project: “nine deaths” refers to the many setbacks he faced during the lengthy creation process, while “two births” celebrate both the “Phoenixes” themselves and the two children born to his studio staff during the same period.

The exhibition will be accompanied by a full range of public programs later in the summer.

Xu’s history with the Sackler is long and prolific; the gallery organized the first major solo exhibition in the U.S. featuring a Chinese contemporary artist, “Word Play: Contemporary Art by Xu Bing” (2001–02), and the resulting commission, “Monkeys Grasping the Moon,” was the Freer and Sackler’s first commissioned contemporary art installation. Unveiled in 2004, this unique work is permanently on view, dropping nearly 86 feet through the Sackler’s central atrium. Most recently, Xu was a part of the Sackler’s 25th anniversary celebration in November, giving a lecture on his work.

Xu was born in Chongqing, China, in 1955. In 1990, he moved to the U.S. on the invitation of the University of Wisconsin-Madison. He returned to China in 2007 and is currently the vice president of the Central Academy of Fine Arts in Beijing, where he received his bachelor’s degree and master’s degree in fine arts and later taught. Besides the Sackler, solo exhibitions of his work have been held at the New Museum of Contemporary Art in New York, the Joan Miro Foundation in Spain, the National Gallery of Prague and the Spencer Museum of Art in Kansas. Xu has also shown at the 45th and 51st Venice Biennales, the Biennale of Sydney and the Johannesburg Biennale.

The Arthur M. Sackler Gallery, located at 1050 Independence Avenue S.W., and the adjacent Freer Gallery of Art, located at 12th Street and Independence Avenue S.W., the Smithsonian’s museums of Asian art, are on the National Mall in Washington, D.C. Hours are 10 a.m. to 5:30 p.m. every day (closed Dec. 25), and admission is free. The galleries are located near the Smithsonian Metrorail station on the Blue and Orange lines. For more information, visit www.asia.si.edu. For general Smithsonian information, call (202) 633-1000.