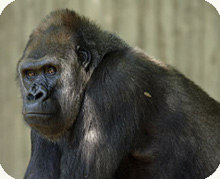 The Smithsonian’s National Zoological Park euthanized a female 44-year-old western lowland gorilla, Haloko, today because her declining health compromised her quality of life. Haloko was the Zoo’s oldest and only wild-born gorilla. Per standard procedure, a necropsy will be performed.

On Dec. 1, 2010, Haloko received a routine physical examination and was diagnosed with congestive heart failure. Congestive heart failure is a condition in which the heart can no longer pump enough blood to the rest of the body and is common in western lowland gorillas. Zoo veterinarians consulted with the Gorilla Cardiology Advisory Group and other cardiologists to implement a drug regimen and plan to support her heart function and quality of life. Since then, Haloko has been under constant observation. Keepers noticed symptoms of swelling in her limbs, chest and abdomen and a decrease in general activity. Over the past two days, the keepers noted that Haloko’s condition deteriorated significantly, and Zoo veterinarians along with curatorial staff made the difficult decision to euthanize her.

Haloko came to the Zoo in December 1989 on loan from the Philadelphia Zoo after having lived at the Bronx Zoo. In 1992, she gave birth to the Zoo’s only silverback, Baraka, although a different female, Mandara, in the family group raised him. Haloko’s cargivers considered her to be a very complex character who was self-sufficient, patient and very tolerant of the antics of the juveniles in the group.

The Zoo’s western lowland gorillas live in one group at the Great Ape House. The Zoo currently has three males and three females on exhibit, including a female baby born Jan. 10, 2009. Western lowland gorillas, which are native to tropical forests of West and Central Africa, are listed as critically endangered on the International Union for Conservation of Nature’s Red List of Threatened Species, primarily due to habitat loss and fragmentation and poaching. In captivity, gorillas can live up to 56 years of age; median life expectancy is closer to 30 years of age.