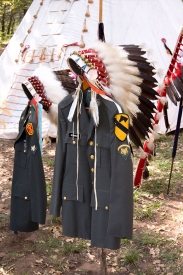 The Smithsonian’s National Museum of the American Indian has announced the five finalists for the design of the National Native American Veterans Memorial. They are:

The design competition is a juried, two-stage process. Stage I was an international open call to submit design concepts. A blue-ribbon jury of Native and non-Native American artists, designers and scholars selected the design concepts from Stage I to advance to Stage II—the finalist designers.

The museum received 413 registrations from five continents, North and South America, Africa, Asia and Europe. “We are exceedingly happy that we received such a wide response to the competition,” said Donald J. Stastny, FAIA,FAICP, FCIP, the competition manager. “The jury examined each of the 120 completed submittals, and each received a rigorous evaluation resulting in the five design concepts that have been selected for Stage II.”

James Dinh is a public artist and landscape architect who founded studiodinh in Los Angeles to explore notions of history, place and ecology within the context of public space. Dan SaSuWeh Jones (Ponca) is a writer, producer and artist and is the former chairman of the Ponca Tribe of Indians of Oklahoma. Enoch Kelly Haney (Seminole) is a sculptor and artist who has served three terms in the Oklahoma House of Representatives and is currently serving in the Oklahoma State Senate. Harvey Pratt (Cheyenne /Arapaho) a multi-media artist and leading forensic artist, retired as the police forensic artist for the Oklahoma State Bureau of Investigation. Stefanie Rocknak is a sculptor and professor of philosophy in upstate New York who focuses on figurative wood sculptures. Leroy Transfield (Māori: Ngai Tahu/Ngati Toa) is a sculptor originally from New Zealand; he studied in Hawaii and founded his own studio in Orem, Utah, where he currently resides.

On Feb. 7, the museum will introduce the Stage II finalists at “Meet Your Designers,” a public event from 1:30 to 4:30 p.m. in the Rasmuson Theater on the first floor of the museum. Each designer will have 15 minutes to introduce themselves, explain why they entered the competition and share their initial concept-design drawings. The event will be webcast at http://nmai.si.edu/explore/multimedia/webcasts/.

The finalists will have until May 1 to evolve and refine their design concepts to a level that fully explains the spatial, material and symbolic attributes of the design and how it responds to the vision and design principles for the National Native American Veterans Memorial. The Stage II design concepts will be exhibited at both the Washington, D.C., and New York museums May 19 through June 3.

The memorial is slated to open in 2020 on the grounds of the museum.

This project is made possible by the generous support of the Eastern Band of Cherokee Indians, Bank of America, Northrop Grumman, the Citizen Potawatomi Nation, the San Manuel Band of Mission Indians, Hobbs, Straus, Dean & Walker LLP, General Motors, Lee Ann and Marshall Hunt, the Shakopee Mdewakanton Sioux Community and the Sullivan Insurance Agency of Oklahoma.

The museum was commissioned by Congress to build a National Native American Veterans Memorial that gives “all Americans the opportunity to learn of the proud and courageous tradition of service by Native Americans in the Armed Forces of the United States.” Working with the National Congress of American Indians and other Native American organizations, the museum is in its third year of planning for the memorial.

To help guide this process, the museum formed an advisory committee composed of tribal leaders and Native veterans from across the country who have assisted with outreach to Native American communities and veterans. From 2015 until the summer of 2017, the advisory committee and the museum conducted 35 community consultations to seek input and support for the memorial. These events brought together tribal leaders, Native veterans and community members from across the nation and resulted in a shared vision and set of design principles for the National Native American Veterans Memorial. For more information about the memorial, visit www.AmericanIndian.si.edu/NNAVM.