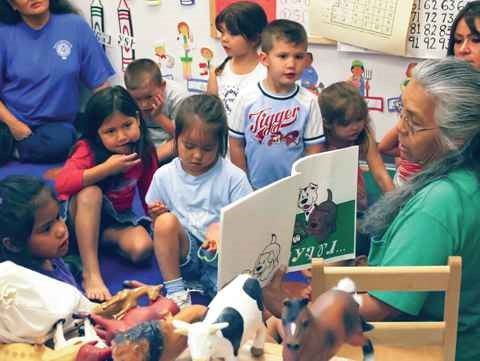 The Smithsonian’s National Museum of the American Indian is looking to change the narrative about American Indians in classrooms, transforming how teachers are teaching history to achieve a more inclusive, accurate and complete education. The Cherokee Nation was one of many Native nations to lose its lands to the United States. As part of its national education initiative, Native Knowledge 360 Degrees (NK360°), the National Museum of the American Indian has launched a new online educational resource available for educators and students titled, “The Trail of Tears: A Story of Cherokee Nation Removal.”

The new online materials, which incorporate the written Cherokee language, tell the story of the removal of the Cherokee people from their original homelands in the Southeast—Georgia, South Carolina, North Carolina, Tennessee, Alabama and Kentucky. In particular, the digital lesson highlights the numerous strategic efforts of the Cherokee Nation to avoid removal and the Cherokee people’s persistence in rebuilding their nation after ultimately being forced to move to Indian Territory, now Oklahoma, during the 1830s.

Produced by the National Museum of the American Indian in collaboration with leaders, historians, scholars and other community members from the Cherokee Nation, this interactive uses primary sources, quotes, images and short videos of contemporary Cherokee people to tell the story of how their nation resisted removal and how they survived to celebrate and sustain important cultural values and practices today. This resource was designed to help students and teachers better understand an important and difficult chapter in the history of both Native nations and the United States.

“Native Knowledge 360° is aligned with the work of many Native nations, states and organizations that share a common goal of making American Indian education a priority,” said Kevin Gover, director of the National Museum of the American Indian. “Americans do not know enough about our shared history even to be properly offended at the lack of an inclusive narrative that illuminates the history of this continent in all of its complexity. By offering better materials to our educators about American Indians, we are looking to create a more empathetic and better educated citizenry.”

The Cherokee removal story and additional teacher and student resources comprise a new component to NK360°’s educational module “American Indian Removal: What Does It Mean to Remove a People?” The module includes the removal stories of several other Native nations, supporting secondary education about the vast scope and impact of American Indian removal in the early 19th century.

“It is an honor for Cherokee Nation to collaborate once again with a renowned institution like the National Museum of the American Indian,” said Cherokee Nation Principal Chief Chuck Hoskin Jr.  “We applaud the efforts of the museum to educate a new generation of young people and provide them with a more comprehensive and accurate understanding of forced removal and the impact it has had on our country. Participating in NK360° is a wonderful opportunity to share the Cherokee story, our unique history and heritage and showcase who we are in the 21st century. They will learn about the resilience of the Cherokee people and see that we remain a vibrant and essential part of America’s tapestry. It is an inspiring story, a truly American story, and sadly, it is getting lost in our country’s classrooms. It is our responsibility to ensure the true accounts of the Cherokee people are accurately documented and available for the public.”

NK360° was created to provide educators with essential understandings about American Indians that serve as a framework for teaching about Native American history, cultures and contemporary lives. The initiative offers pre-K to post-secondary teacher training to build new skills, awareness of classroom resources and the confidence to improve their teaching. NK360° challenges common assumptions about Native peoples—their cultures, their roles in U.S. and world history, and their contributions to the arts, sciences and literature. It advocates at the national level for teaching an American history that integrates important Native American events in the nation’s narrative and recognizes the richness and vibrancy of Native peoples and cultures today.

The National Museum of the American Indian also acknowledges the support of the Margaret A. Cargill Foundation in the development of NK360° educational resources.

In partnership with Native peoples and their allies, the National Museum of the American Indian fosters a richer shared human experience through a more informed understanding of Native peoples. The museum is located on the National Mall at Fourth Street and Independence Avenue S.W. and open every day from 10 a.m. to 5:30 p.m. (closed Dec. 25). Connect with the museum on Facebook, Twitter, Instagram and AmericanIndian.si.edu.