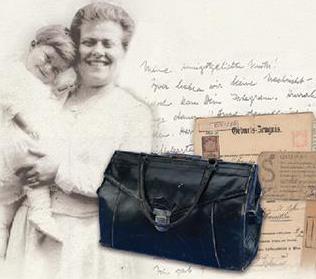 The Smithsonian’s National Museum of American History will open a new exhibition, “Camilla’s Purse,” Jan. 24 in the Albert Small Documents Gallery. The exhibition examines the life of Holocaust survivor, Camilla Gottlieb, through a display of letters, official documents and personal possessions. The records, collected and secured by Gottlieb in a black leather purse, tell the story of an ordinary life upended into crisis, imprisonment and ultimately of a new life in the United States.

“This exhibition tells one woman’s story of surviving the Holocaust, her immigration to the United States and the triumph of the spirit,” said William H. Yeingst, museum curator. “The narrow, family-oriented focus provides a uniquely intimate experience of such a terrible time.”

Camilla Klaber, one of Vienna’s 200,000 Jews, married Hermann Gottlieb in 1918. Purse contents such as Gottlieb’s identification card, citizenship record and traditional Jewish wedding contract serve as reminders of the normal and secure home life that the family enjoyed before the Germans invaded and annexed Austria in 1938. Faced with growing anti-Semitism, Gottlieb and her husband Hermann tried to leave the country but were impeded by immigration laws. Ultimately, their daughter, Lony, was able to get to the United States but her parents remained in Vienna.

In 1942, the Gottliebs were deported to the Theresienstadt concentration camp in Czechoslovakia. After Hermann Gottlieb died of a lung infection in 1943, Camilla Gottlieb persevered, working more than 11 hours a day until Russian forces liberated the camp May 8, 1945. She preserved the record of her journey and experience by keeping items such as food-ration coupons and an original train ticket stub documenting her transport to the Theresienstadt concentration camp.

Following liberation, Gottlieb returned to Vienna where she made strenuous efforts to communicate with her daughter Lony and to emigrate to the United States. Documents such as a letter to the Immigration and Naturalization Service, an approved visa petition and an emigrant entrance clearance form, trace her efforts. In 1946, Gottlieb joined her daughter and son-in-law in the United States, starting a new life for herself as an embroiderer.

Camilla Gottlieb died in 1964, and her family had not fully learned of her World War II Holocaust experience. Her grandson, Robert Bodansky, found the bag when he went through her effects after she passed away.

To further examine Holocaust-era artifacts and primary source documents, the National Museum of American History and the United States Holocaust Memorial Museum will host a tweetup Jan. 24 from 1 to 4 p.m. The museums encourage the public to follow along with the hashtag #docsocial.